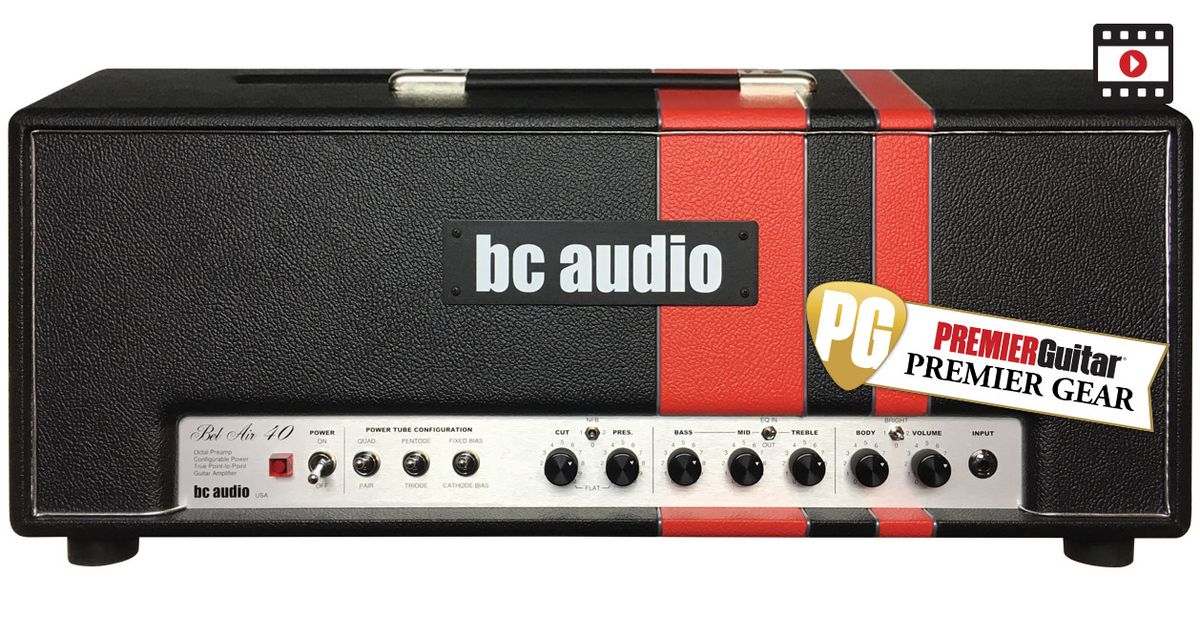 The latest creation from San Francisco amp designer Bruce Clement is a fresh take on that classic Fender recipe: a 40-watt amp powered by a quartet of 6V6 tubes. Okay, I’m lying. Fender never made such an amp. While the company used dual 6V6s for small combos such as the Princeton, they opted for pairs of tighter, brighter 6L6s in their midsized models. But modern builders such as Victoria, Carr, and Dr. Z have run with the 6V6-driven-medium-wattage concept, producing amps that combine the power of dual 6L6s with the 6V6’s softer, warmer, and quicker-to-distort character. Despite such predecessors, BC’s Bel Air 40 breaks new ground with a distinctive blend of Fender and Marshall attributes and an innovative and inspiring control set.

Point/Counterpoint
The Bel Air 40 resides in a Marshall-style head cabinet. The solid wood cab is flawless, and Clement’s signature “racing stripe” design is eye-catching without being cheesy. But the real beauty lies within. Clement is justifiably renowned for his immaculate point-to-point wiring. Here, the fastidiously routed wires with their sharp 90-degree angles suggest an aerial view of some modernistic metropolis. It’s clean enough to eat from, though doing so may invalidate your warranty. This is masterful work.

The amp’s most newsworthy features are its unconventional controls. In Clement’s words, these “allow you to reach inside the amp, so to speak, and re-wire the power section in multiple ways.” And guess what? It’s true. (Details below.)

Fundamentally Solid
The amp’s core tones are punchy and ultra-present. Thanks in part to a pair of hefty ClassicTone transformers, the fundamental note frequencies feel as grounded as bridge piers. Single notes are clear and powerful. Chords ring harmoniously, with superb string-to-string separation. The frequency response is vast. Bel Air can move serious lows, while the top end shimmers with animation.

The frequency response is vast. The Bel Air can move serious lows, while the top end shimmers with animation.

Cranked, the amp has the hair-trigger dynamic response of a good plexi. (There’s no master volume control, though there’s a half-power switch that removes two power tubes from the circuit.) Meanwhile, the chiming, articulate highs have more of a Fullerton flavor. The rectifier tube is a GZ34. The treble/mid/bass tone stack has a vintage Marshall personality.

Those are Bel Air’s constants. Beyond that, the amp is something of a chameleon, depending on your settings. The preamp section employs a pair of 6SL7 pentode tubes, in lieu of the usual triodes. These provide crisper response and more clean headroom. But you can switch between pentode and pseudo-triode operation, with a softer, looser sound in the latter setting. It’s a dramatic contrast.

Not the Normal Knobs
There are other unusual options. One toggle alters the amp’s biasing scheme. The fixed-biased setting is relatively loud and tight, while the cathode setting is quieter and “browner.”

There’s also a 3-way bright switch. The off setting is the darkest. The two active settings are both brighter, but with different midrange contours.

The amp’s 3-way negative-feedback loop toggle is fascinating. “No feedback” is the loudest, unruliest option, yet it never gets sloppy—note definition remains excellent. The two feedback-on settings are more reined-in, with relatively taut bass response. This setting interacts with the adjacent cut and presence knobs, affording precise control over the amp’s high-frequency content.

Another cool feature is a “body” control that gradually introduces a larger coupling capacitor, altering the low-end content of your tones. It’s especially useful for trimming lows from heavily overdriven sounds, adding definition for those times when you don’t happen to desire stoner sludge.

A final nifty feature is a tone-circuit bypass switch. These vintage-style tone controls are strictly passive: They only cut frequencies, and can never boost them. But bypassing the tone stack yields dramatic increases in level and frequency range. With a good guitar, the results can be epic.

These are interesting and useful features. In fact, the negative-feedback toggle, bass-regulating body control, and tone stack bypass yield such dramatic results that you wonder why they’re not standard features on more amps.

The Verdict
TheBel Air 40 is a magnificent instrument. Its build quality is phenomenal. The core tones are lovely. An array of unconventional controls provides remarkable tonal flexibility, not to mention a fascinating lesson in amp topology. Yeah, there’s an elephantine price tag in the room. But the amp’s multiple design innovations, unusually labor-intensive build, top-shelf parts, beautiful tones, and flawless construction more than justify the cost.