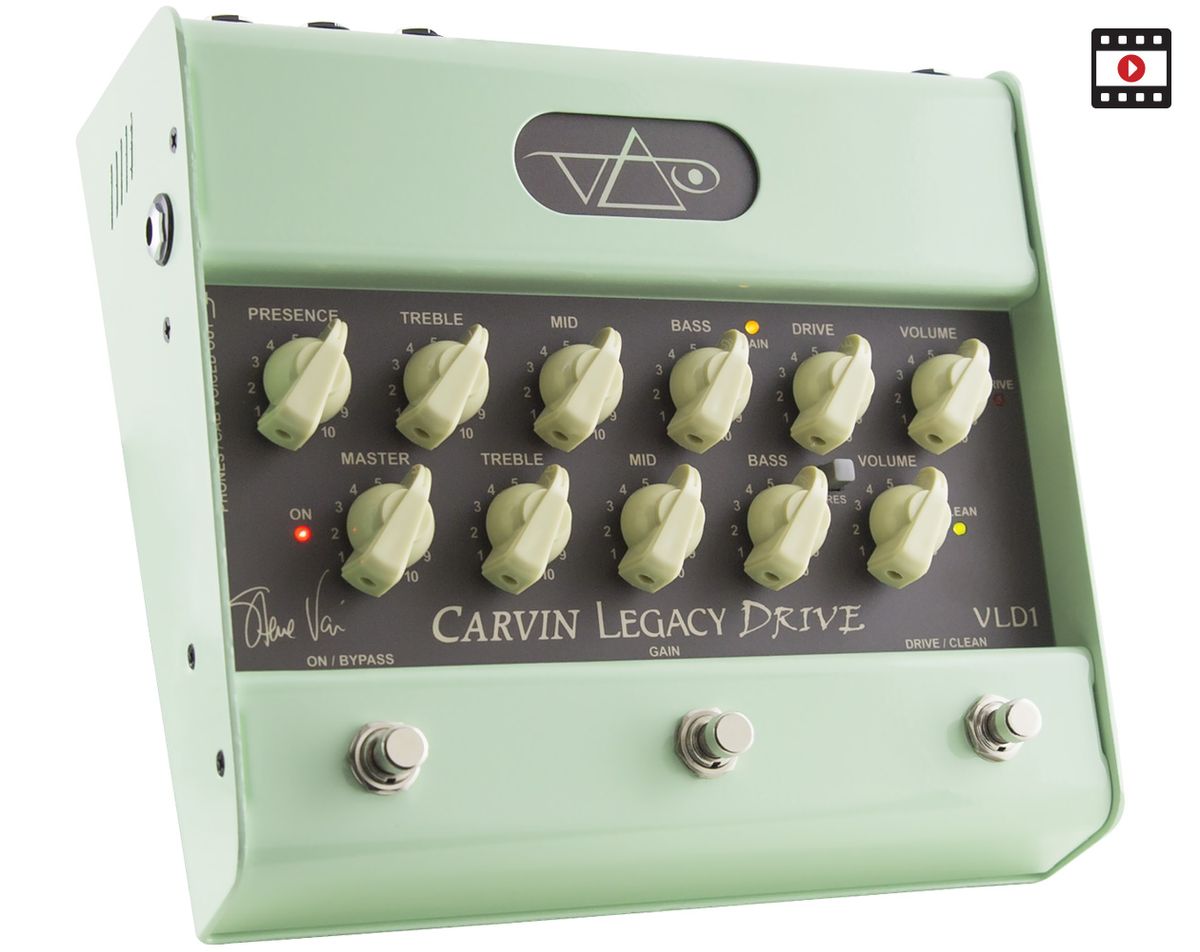 Steve Vai’s fly-in solution is a formidable preamp for backline and recording situations.

The nifty foam-green VLD1 Legacy Drive tube preamp pedal was created at Steve Vai’s request so the shred supremo could pack his familiar Carvin Legacy amp tone into a carry-on bag and plug into any available power amp or DI situation.

As such, this really is a triple-threat pedal. It achieves Legacy-style overdrive by connecting to the front end of any traditional guitar amp via the standard output. It can be plugged straight into any available sound system via the cab-voiced DI out (which doubles as a headphone out for solo practice). And it connects straight into your recording interface for tracking.

Totally Tubular
The extensive printed circuit board (PCB) within the hefty steel housing also features two genuine 12AX7 preamp tubes seated in sockets mounted directly to the board. Carvin tells us these are run at the same proper high voltages that power preamp tubes in the front ends of Legacy amps, and the VLD1 ships with a dedicated 12VDC/1,000 mA power unit to supply the necessary juice.

It’s a superbly easy means of achieving—and recording—a range of high-gain lead sounds that might otherwise be elusive or tricky to capture in the home studio.

The 2-channel preamp offers drive and clean channels—each of which has its own independent three-knob tone stack. The drive channel has drive and volume controls, while the clean channel has a volume control exclusively. Both channels share the master and presence control. A third footswitch adds extra gain to the drive channel, and there’s an additional presence button on the clean channel that effectively functions as a bright switch—adding harmonic sparkle in the 8 to 10 kHz range. Also, Carvin thoughtfully includes connections to control footswitch functions remotely if you want to mount it in a rack.

Drive Time
I played a Gibson Les Paul with humbuckers and a Novo Serus S with Amalfitano Strat pickups into the VLD1. I used the pedal in front of a custom JTM45-style head, which I fed into the line-in on a Fryette Power Station to use as a preamp into a 2x12 cab with Celestion speakers. I also recorded to Pro Tools via either the cab-simulated out or a Two Notes Torpedo speaker simulation into an RME Fireface 800 interface for recording. Although it’s a cool, powerful, and versatile tube overdrive pedal used into a traditional amp, I really felt the latter two applications brought the best out of this unit.

Cons:
Takes a re-think of your own amp’s gain and tone controls to make the most of it as a traditional overdrive pedal.

Whether through my studio monitors or into a traditional guitar cab via the Power Station’s tube power amp, the VLD1’s drive channel was a fast-track to sizzling contemporary rock lead tones peppered with lashings of harmonic saturation and good dynamic range. I found it extremely enjoyable when used this way, and it’s a superbly easy means of achieving—and recording—a range of high-gain lead sounds that might otherwise be elusive or tricky to capture in the home studio. The tone stage has plenty of EQ-sculpting power when you need it, and by balancing gain and volume controls it’s easy to go from a tasty vintage crunch (something you might not expect from this unit) to all-out scorched earth—and once you get there, the gain footswitch definitely takes the savagery further over the top.

I found the clean channel a little too, well, clean. In my estimation it would benefit from its own gain control to enable better edge-of-breakup voicings. It boasts great headroom for those who need it, though, and is an excellent foundation for your favorite overdrive pedal or lush delay or modulation effects.

Make no mistake, with the JTM45-style amp the VLD1 sounded great. But in this setup it was easier to induce spikey and fizzy drive tones that weren’t an issue in the other configurations. It packs a lot of punch in this configuration, and can really scream when you want it to. But since this is much like stacking two full tube-powered preamp stages—the VLD1’s into your amp’s—results are extremely dependent on the host amp’s preamp gain and EQ settings, and milder takes on each elicited the best results.

The Verdict
The VLD1 is a versatile 2-channel tube-powered rock machine plugged into the front of any amp. But it’s also a superb grab-and-go preamp that will allow you to tackle any fly-in gig with ease, and it’s an extremely impressive tool in that context. On top of that, I have encountered few paths to shred-certified recorded tone that are as simple to take as this one.