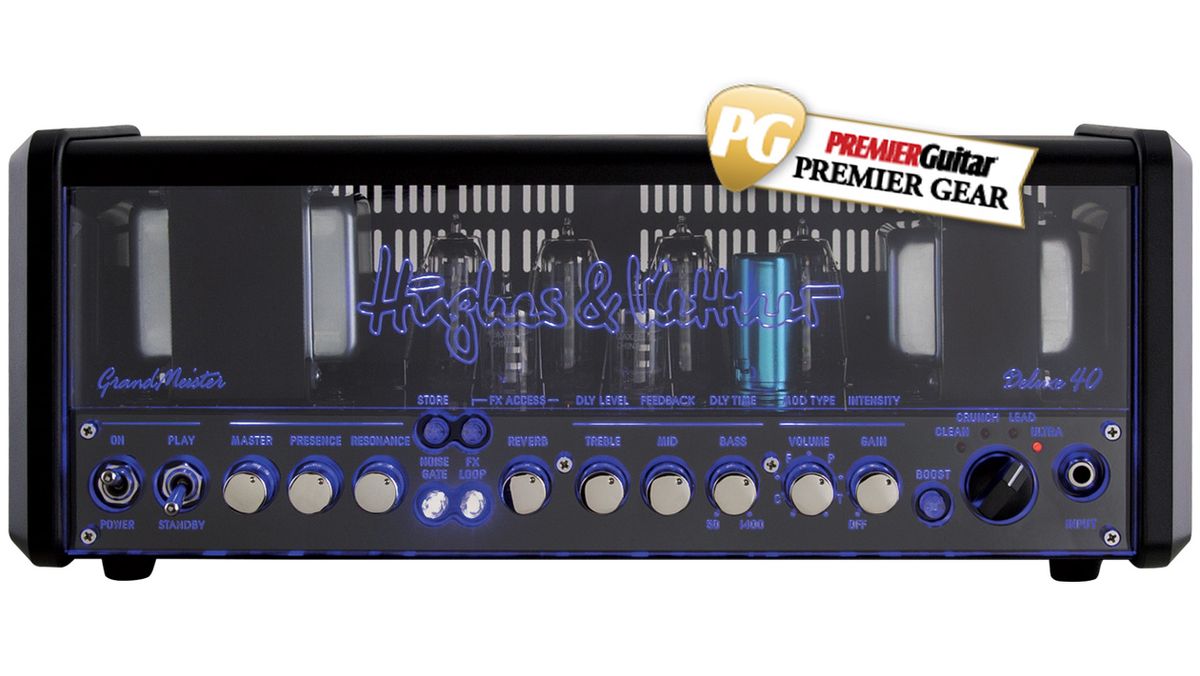 Have you been enticed by amp modelers? Hughes & Kettner’s GrandMeister Deluxe 40 just might give you pause. This best-of-both-worlds mini monster is a 4-channel, 40-watt tube amp with three 12AX7 preamp tubes and four EL84 power tubes. But it features deep programmability and an assortment of modern features, including MIDI control via an optional iPad remote controller, that give the H&K some of the same flexibility and functionality that makes modelers appealing. It also features a slew of built-in effects, a built-in cabinet emulator, an attenuator (with 40-watt, 20-watt, 5-watt, and 1-watt settings), a Tube Safety Control that automatically adjusts bias, and a built-in noise gate.

Lookin’ Sharp
The GrandMeister Deluxe 40 is decked out in familiar Hughes & Kettner fashion. The clear plexiglass front panel lights up in blue when it’s on, illuminating a control panel literally covered with knobs. Next to the power and standby switches are knobs for master volume, presence, resonance, reverb, treble, mid, bass, volume, and gain. There’s a switch to change between the four channels: clean, crunch, lead, and ultra. There are also five buttons: one in the far right corner for boost, and four in the center to store presets and engage the noise gate, FX loop, and “FX Access” functions.

The ultra channel turns the H&K into a fire-breathing monster.

FX Access changes functions for several of the knobs. The EQ knobs, for example, also function as delay level, feedback, and delay time. The volume knob morphs into a selector and rate control for the four modulation effects: chorus, flanger, phaser, and tremolo. The gain knob becomes an intensity knob for the modulation effects.

Because most knobs have secondary functions, and because the amp is programmable, the physical position of knobs doesn’t always indicate what you hear. Cleverly, though, the amp’s “store” button lights up when a knob is adjusted to the setting you hear through the speaker.

Grand Tones
For this test I used a Gibson Les Paul Standard and ran the GrandMeister Deluxe 40 through a Celestion-equipped, Marshall 1x12 cabinet. I started with the clean channel, with the gain around 12:30, EQ controls all around noon, and presence and resonance around 1 o’clock. At this setting, I got a beefy, robust clean sound and very dynamic, classic tube responsiveness. Light-to-medium attack gave me pristine clean sounds for fingerpicked chords. Heavier attack summoned grit reminiscent of a smaller Fender amp cranked to the gills. Jacking the clean channel’s gain all the way up and engaging the boost produced fat “Money for Nothing” tones, and rolling my guitar’s volume knob back generated smoky jazz/blues tones with enough edge to give fast lines definition.

The crunch channel is British voiced, and with the gain around 2 o’clock, EQ controls all around noon, and presence and resonance around 1 o’clock, I got great biting roots rock tones. Turning the guitar’s volume knob down to about 2 cleaned up the signal almost entirely. The lead channel—with the gain around 9 o’clock—delivers throaty, vintage lead sounds, and pushing the gain up to noon conjured thoughts of Carlos Santana’s hottest lead tones. With the gain at 3 o’ clock, the amp took on an aggressive metal feel.

The ultra channel, meanwhile, turns the H&K into a fire-breathing monster, providing liquid lead tones with seemingly infinite sustain, crystal clear articulation on fast low riffs, and a gigantic bottom end. Wow! And when I scaled the power down to the 1W setting, the amp stayed cutting and clear.

Cons:
A USB jack would be useful.

A lot of gear nuts decry built-in effects on amps. And while I enjoy my pedal collection, I really liked the GrandMeister Deluxe 40’s effects. The delay, which ranges from 50 ms to 1.4 seconds, was warm and, frankly, sounded better than my vintage Ibanez AD-9. The tremolo was lush and vibrant. The chorus was very airy and produced great volume-swelled chords. If you opt to use your own effects, you can just bypass the ones built in and patch them into the serial FX loop in the back.

Cracking the Code
To get the most out of the GrandMeister Deluxe 40, you’ll want to try the optional, phantom-powered FSM-432 MK III MIDI board. The simplest application is stompbox mode, which works like a conventional amp footswitch and lets you select from the four amp channels. There are also switches for mod, tap tempo, and boost.

Preset mode really maximizes the amp’s potential. You can store 128 presets, but the best part is that the presets are pretty easy to use. The factory presets are great. In most cases, only minor tweaks are necessary to get them just right for your own setup. And the ease of calling up precisely calibrated sounds encouraged me to explore unfamiliar styles. The preset “You Too,” for instance, is a delay-drenched, clean sound with repeats set at 162 bpm. I set up a drum loop at that exact tempo and started writing riffs based on the very cool delay pattern.

The ability to easily and seamlessly switch between vastly different programmed sounds—say, swampy, tremolo’d clean chords to VH-style, flanger-imbued, rhythm riffs to a molten metal lead with delay—makes the amp incredibly expressive. Such maneuvers would be difficult, if not downright impossible, with a conventional amp and pedalboard setup. But they are child’s play with the GrandMeister Deluxe 40.

If you’re hyper detail-oriented, the iPad GM40 Remote app, which connects with the optional WMI-1 wireless MIDI interface ($199), lets you numerically see all the exact parameters of each setting in real time on an iPad, guaranteeing that you get precisely the control you need.