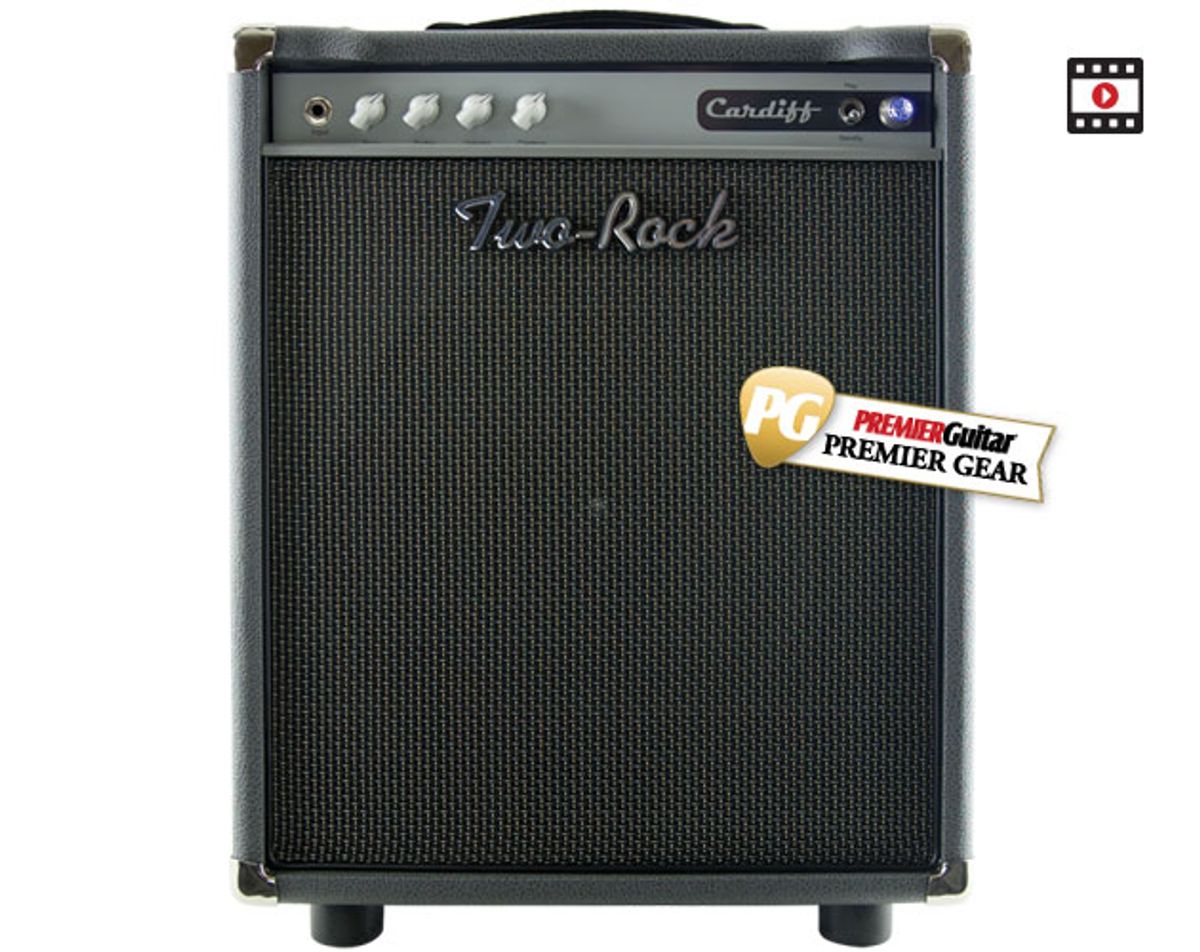 Can you have EL84 sparkle and bounteous bottom?

It’s easy to understand why the Vox AC15 provides the template for so many contemporary boutique amps. The model has half the power of the AC30, Vox’s iconic British Invasion amp, but it generates similar thrills: harmonically rich overdrive, taut clean tones, and explosive treble energy that always makes me think of Chief Engineer Scott from Star Trek: “She cannae take anymore, Captain—she’s gonna blow!”

But despite its classic status, the nearly 60-year-old design is ripe for modifications that make it more suitable for modern players, styles, and gigs. That thinking has spawned many modern AC15 spinoffs, and Two-Rock’s Cardiff combo is one of the most inspiring offspring to date.

Retro Be Damned
Cardiff is available in a $1,595 head-only version, but we reviewed the newer $1,895 1x12 combo. Most previous Two-Rock models are descended from the Fender family tree, so the Cardiffs represent Two-Rock’s first foray into EL84 territory. The EL84 was the ubiquitous Vox power tube until the company lost the thread in the late 1960s with their widely reviled solid-state amps.

Cardiff makes no nods to vintage cosmetics. The single-channel amp is a utilitarian gray box with a front panel consisting of one input, four knobs, and a power switch. It’s minimal around back, too, with only speaker outs and a simple passive effects loop. A passive loop works fine for patching in a delay or reverb pedal, but it’s probably not a good idea to run an entire pedal chain through one.
Cardiff’s circuitry is a thing of beauty.

Flashy, Cardiff ain’t. But the hardware and construction are superb. The cabinet is stout, solid wood. The control panel is slightly recessed, shielding the chicken-head knobs from damage. The compact chassis is tucked in tightly above the Two-Rock-branded 12" speaker. The cabinet is open-backed, but a rear panel with a circular cutout protects the tubes without blocking access to them. No gear is indestructible, but this is probably about as close as tube combos get.

Pretty on the Inside
Cardiff’s circuitry is a thing of beauty. It’s true point-to-point wiring with no circuit board or turret board—just a few bits of terminal strip. The wire routing is immaculate, with perfectly braided cables and a clean, almost geometric layout. Wires are secured in places with glue. If you’re accustomed to poking around inside amps, your first thoughts are likely to be, “Wow, they knew what they were doing” and “I bet this sounds great!”

And guess what? You’d be right.

Sizzle, Meet Thump
At risk of oversimplifying, the Cardiff sound combines the qualities players tend to love about AC15s, minus other traits sometimes viewed as drawbacks. You get the crackling high-end excitement of a vintage Vox, but with loftier headroom. And while old AC15s can be anemic on the low end, Cardiff is a bottom-end beast.

When you play low-register notes or chords, you damn well hear the fundamentals. It’s remarkable how clearly this amp speaks in the lowest octave of the guitar register. This is great for dropped tunings, or for slathering on stompboxes.

Cardiff blasts an uncommonly loud 15 watts. There might not be quite enough power for un-mic'd club gigs with a heavy drummer, but chances are you’ll be surprised by this small amp’s sheer muscle. And, of course, the ultra-present highs also help Cardiff cut through a mix.

Contoured Colors
The ranges of the bass and treble controls are carefully manicured, and perfect for reigning in reckless highs, pumping up the thump, or dialing back lows to remove mud. There’s also a second layer of tone control: Cardiff’s clever contour knob, which is a wide-frequency sweep control.

The contour control provides flat response at its 12 o’clock setting. Right of noon, it emphasizes highs while dialing back lows. Left of noon, it does the opposite. You can almost think of it as a far subtler version of the single-knob tone control on a Big Muff fuzz. Two-Rock suggests using contour to adapt to varying instruments and rooms without adjusting the preamp-stage treble and bass controls, but it works the other way around too. Between these interactive tone stages, it’s easy to dial in the desired sweet spot. Contour is far more versatile than the single-knob low-pass filters on, say, small Fender tweed combos.

The Verdict
Cardiff is simple but deadly. It nails the joyous high-end anarchy of a classic EL84 amp, but with the sort of low-end response you associate with large Fender combos. Granted, $1,895may seem steep for a small single-channel combo devoid of flashy features. But between its redoubtable cabinetry and immaculate point-to-point wiring, Cardiff promises to perform well for a long, long time. The simple controls are far more versatile then they might first appear. I’ve you’ve ever wished for an amp with the finger-in-socket energy of a classic British combo, but with tighter and tougher lows, you should definitely audition this “Welsh” wonder.