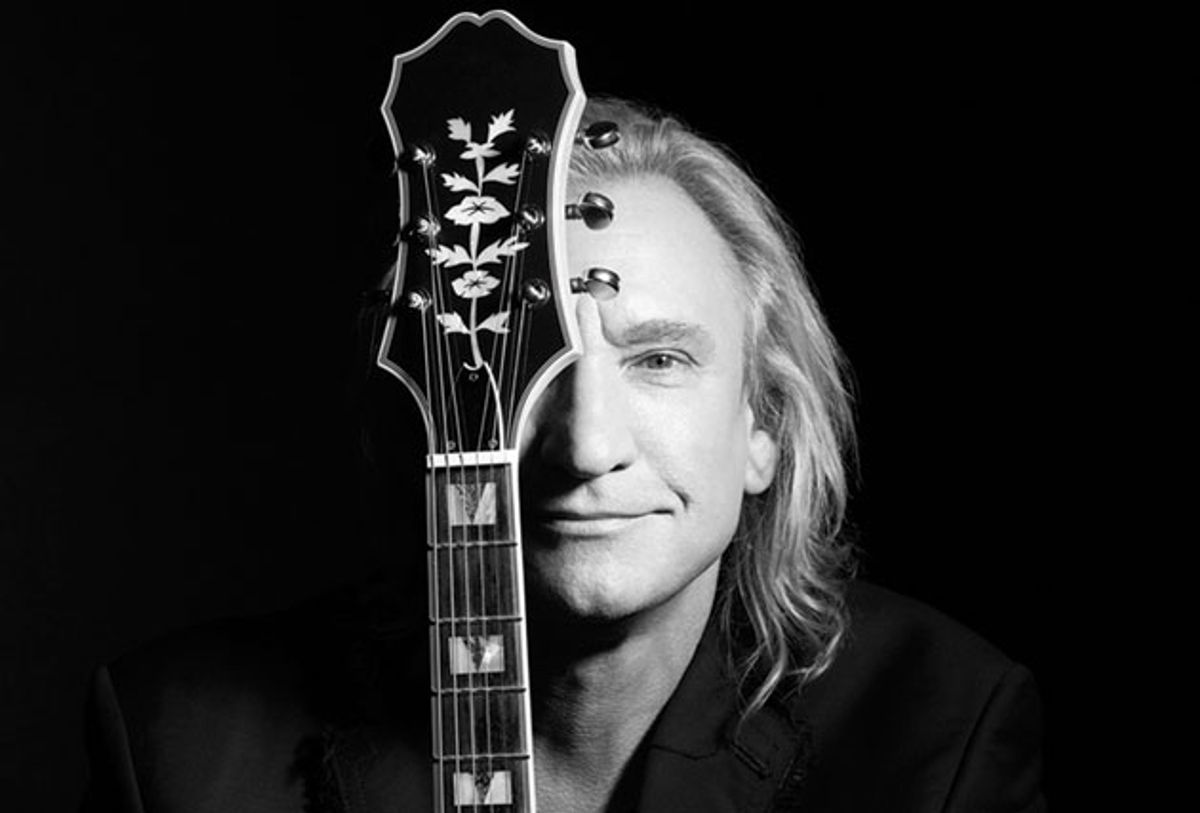 By combining fearless bending with a hefty dose of funky chord work, Walsh helped define the sound of classic rock.

Joe Walsh is more than an Ordinary Average Guy when it comes to playing guitar, and while most of the attention surrounding him focuses on his masterful slide work (which he learned from Duane Allman), there are countless other areas of Walsh’s style you should investigate, try to emulate, and fully explore.

With a long career that includes the James Gang, the Eagles, Barnstorm, and a string of successful solo albums, Walsh is a bona fide rock legend. This Rock and Roll Hall of Fame inductee is widely considered one of the greatest rock guitarists ever, and his inspiring style features a healthy combination of greasy blues-based phrasing, quirky string bending, and scratchy rhythm riffs. His tasty licks are immortalized in such classics as “Hotel California,” “Funk #49,” “Life in the Fast Lane,” and “Life’s Been Good.” For this lesson we’ll focus on Walsh’s string-bending style, and provide you with some signature licks and funky phrases.

Walsh’s signature moves include a percussive picking attack, right- and left-hand muting techniques, hybrid picking, double-stops, staccato phrasing, and a fearless bending style that can be rather difficult to emulate. His influences include Eric Clapton, Jeff Beck, George Harrison, and Peter Green, and you’ll find that Walsh allows single notes and chords to ring for as long as possible—a technique he picked up from his friend, Pete Townshend.

Many of Walsh’s single-note riffs, fills, and solos feature groups of notes that smear into each other, saturated with ringing sustain and a mildly overdriven tone. He also incorporates a variety of effects in his music, including wah, fuzz, phaser, talk box, and delay.

Walsh primarily sticks to pentatonic and blues scales, but he’ll occasionally reach for notes outside—especially when bending. Play through Ex. 1 to see a common idea that instantly reveals a few of Walsh’s trademarks, including percussive mutes and a double-stop bend. Notice the awkward index finger bend near the end and you’ll find there’s nothing ordinary or average about this lick.

Walsh has always shown a command of funky grooves, which is obvious in a number of his songs. A percussive pick attack and skanky muted phrases are omnipresent in his rhythms and leads, and at times he blurs the line between the two, creating a compelling rhythm/lead playing style that’s truly his own.

A big part of his sound involves unusual fret-hand movements, including compound bends. Ex. 2 will toughen up your fingertips and help get your bends together. Use a loose and relaxed feel, and play the phrase a bit behind the beat. Dial up the James Gang’s “Funk #48” and “Funk #49” for some inspiration.

Be sure to sustain bends for their full value as you move from note to note. End both phrases with a smooth vibrato—this makes the lick more vocal.

One of Walsh’s notable trademarks is a tricky bend-and-release lick. Ex. 4 shows how he builds tension by repeating a series of half-step bends and milks that A for all it’s worth before adding some chromatics to close out the phrase.

The climbing chromatic area of the previous example brings us to the infamous “Joe Walsh” lick (Ex. 5). Walsh has created numerous variations of this lick throughout his career, and you’ll hear them in such classics as “Life in the Fast Lane,” “Hotel California,” and “Those Shoes.”

Let’s close this lesson with the snappy funk lick in Ex. 6, which is very similar to what you’ll hear in the twangy funk instrumental “Asshtonpark” by the James Gang. If you want to create an accurate tone, add some delay with a touch of reverb. Watch out for the index finger bends in the second measure—Walsh loves playing those. It can be frustrating at first, but keep at it!