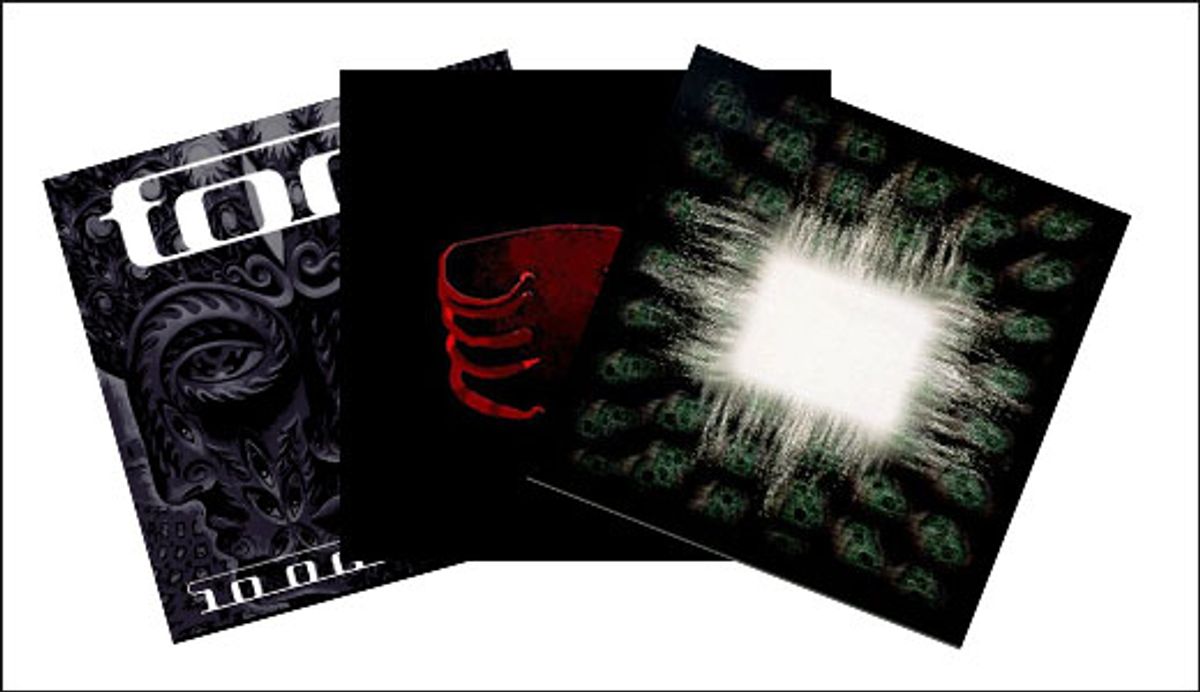 One of the most mysterious and interesting guitarists to come out of the post-grunge scene is a master of dynamics, tone, and deceptive rhythms.

Formed in 1990, Tool is still considered to be one of the premier progressive rock bands of the era. While guitarist Adam Jones’ playing is firmly rooted in the progressive idiom, he doesn’t hesitate to draw on elements of grunge and even stoner rock, and the groove-based style of drummer Danny Carey and rock-solid timing of bassist Justin Chancellor results in heavy hypnotic riffs with constant shifting time signatures and exciting changes in dynamics. In this lesson, we’ll touch on some of the topics from previous lessons and dig into exactly how Adam Jones makes somewhat difficult riffs and concepts groove so easily.

In Ex. 1, we take some ideas from our polymeters lesson for a hip single-string riff in dropped-D tuning. Each measure follows a 7-7-2 grouping to give the riff an odd-time feel without actually leaving 4/4. Not too much thought went into the note choices here, but in essence it’s using notes from the D Phrygian dominant scale (D–Eb–F#–G–A–Bb–C).

Ex. 2 uses notes of the D Phrygian mode (D–Eb–F–G–A–Bb–C), mostly against the low open D. To execute this cleanly, use the tip of the fretting-hand first finger to mute the 5th string. This allows you to strum the low three strings and get an aggressive sound. The riff is a repeating idea in 5/4, so spend some time listening and counting along before trying to play the idea. Also, for the sliding power chords at the end, I slide up on the third finger, and down on the first. This feels comfortable, but the jump back to the start of the riff will still be tricky, so heads-up!

Our next riff (Ex. 3) takes inspiration from one of Tool’s most famous jams, and is a fun little idea that alternates between 5/8 and 7/8. Tool are no strangers to multiple time signature changes like this, and there are songs of theirs where I still can’t work out what the time signatures change between as they’re so frequent and well masked by the groove. This idea could be seen as an eighth-note motif with a 16th-note triplet played as an informal turnaround. In the first measure, it’s a four-note idea, and in the second this is extended to six notes. This sounds very unexpected the first time you hear it, but after a few plays you’ll get in the groove.

In the next few examples, we’ll explore how Adam layers different rhythmic parts on top of each other. Our first piece is Ex. 4, which also hovers around the D Phrygian dominant scale we touched on earlier. The minor third between Eb and F# gives this scale its distinctive sound. Also, you might have noticed how the open string creates an almost drone-like quality. That’s another signature part of Tool’s music.

Now, we create a simple melodic idea to go over what we played in Ex. 4. As you can see in Ex. 5, the Gtr. 2 part is our low-end riff and Gtr. 1 is a rather syncopated riff that combines eighth- and 16th-note patterns. Especially prevalent in Danny Carey’s drumming, these complex rhythms are at the core of the band’s ethos.

Ex. 6 uses bigger chord voicings to get a huge sound. In essence, a big D5 chord is played over five strings, and then one note is changed (Bb) on the 3rd string to create a moving inner voice. As in previous examples, the sound has a lot more to do with the driving rhythm than the notes being played.

Not all the band’s riffs are based around thick, saturated distortion. In Ex. 7 we use a clean tone with some effects to create a moody riff in 5/8. You want to let the notes ring out as much as possible, so be careful with your finger placement as the bass notes start moving from D to F, and finally to G. In terms of sonics, I’ve put different delays on the left and right channel, plus a phaser on one side and a flanger on the other. The concept here is to create a richly textured part that could support a vocalist.

The final example (Ex. 8) mixes arpeggiated notes with bigger chord stabs for some drama. I made sure everything rang out because this gives the biggest sound and is perfect for a full-band setting. The idea is based around D minor, but the Ab (b5) adds a darker, bluesy sound.