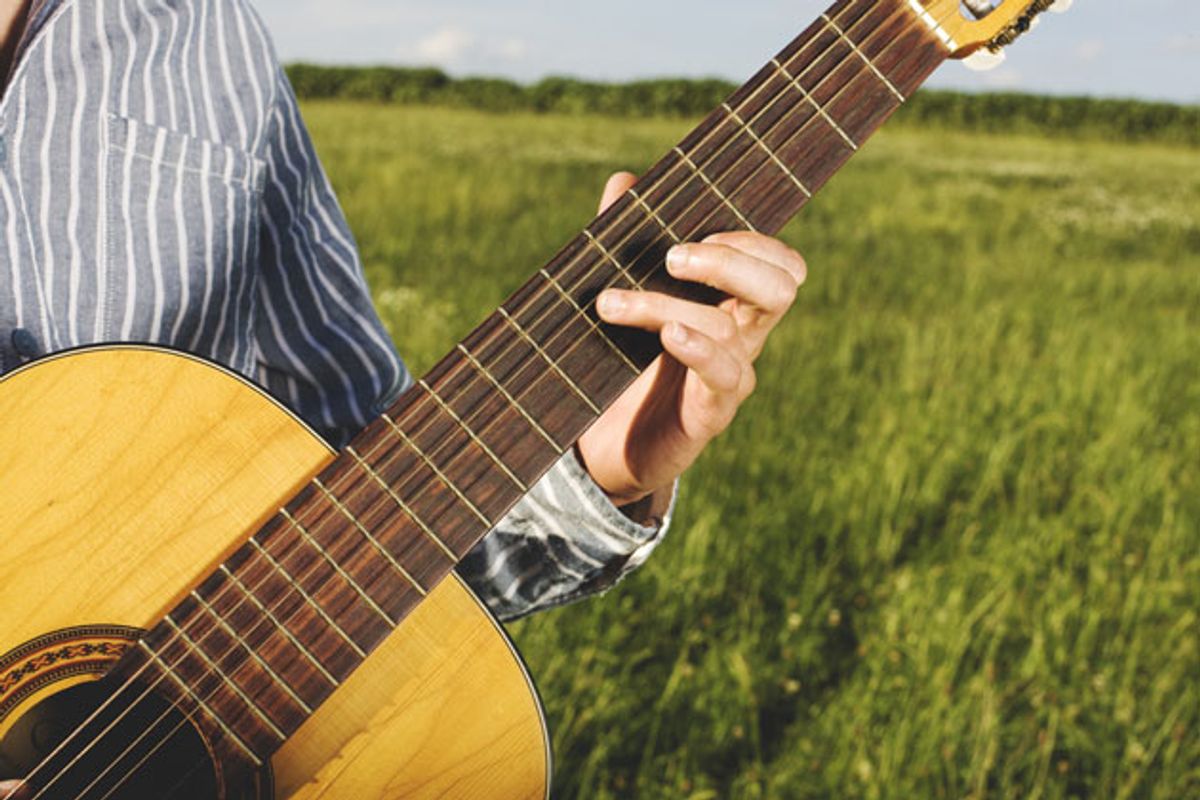 The grooves found in Latin music are full of intriguing rhythmic options. Here’s how to cop that vibe to make the music dance!

Chops: Intermediate
Theory: Intermediate
Lesson Overview:
• Learn how to create infectious Latin riffs.
• Apply elements of tres guitar technique to the standard 6-string.
• Understand how to play major and minor montunos. Click here to download a printable PDF of this lesson's notation along with backing tracks.

A montuno is a two-measure improvised pattern that you can use to add some authentic Afro-Cuban spice to your Latin-style playing. This pattern follows the clave. A clave is the foundation of nearly all Latin music. In our examples we will be using the 2-3 clave, which refers to how many hits are in each measure. (The first measure will have two and the second will have three.) Each example will start off with the clave pattern. This will help you get the sound in your ear.

The first montunos were played by the tres—a 6-string guitar-like instrument where each pair of strings are tuned in either unison or octaves. The most common tuning is G–C–E. This creates a unique sound with the lowest string doubled an octave higher and the other strings doubled in unison.

In Ex. 1, I play a montuno in the key of A major, using a I–IV–V progression (A–D–E) so you can easily hear the chords move along. To imitate the lowest strings on the tres, I’ll play octaves on the top and bottom of each chord. Always be mindful of good voice leading. Knowing all your chord inversions is super helpful when coming up with strong voice leading. You’ll also notice I’m not using any extensions on these chords—they’re all just basic triads. Later you’ll see how we can add more advanced harmonic ideas by using passing chords and substitutions.

Now I’ll take the same chords as in the previous example, but voice them differently (Ex. 2). By inverting the chords you can give the effect of a subtle change without altering the chord structure. You’ll start to notice by listening and playing these examples that there is a greater emphasis on beat 4 than on beat 1. Listen to the clave and the bass player, it will help you feel the groove. In this example, I also moved away from having the octaves on each chord. It still sounds great!

Montunos are traditionally used in solo sections, which are often just one- or two-chord vamps. Ex. 3 is over a C7 vamp. I start with a C triad in 1st inversion, which allows me to have E as my top and bottom note with G and C in between. I take this exact fingering and move it down a whole-step to create a D–F–Bb voicing of a Bb triad. Those notes are the 9, 11, and b7 of a C7 chord. I then move up a half-step to create a passing chord to get me back to my original C triad voicing. Whenever you play a chord a half-step below or above where you’re headed, it creates a leading-tone effect. You don’t need to over-analyze this—it just sounds cool.

For Ex. 4, let’s start looking at some minor-key montunos. This time our chord progression will be Am–F–E–F. You’ll notice that again these are all triads. This style of music employs the clever use of basic harmonic materials combined with African rhythms to create an exciting sound. This example will feature our octaves as outer voices. Our Am chord is in 2nd inversion, yielding E as the highest and lowest note. Both the F and E chords are in root position.

We’ll use the same chord progression in Ex. 5, but we’ll revoice our chords for a new sound. Now our Am chord will be in root position, which gives us an A on the outside voices. Our F and E chords will be in 1st inversion, thus giving us A and G#, respectively, as our outside voices. I encourage you to come up with your own voicings for these exercises.

For our final example (Ex. 6), I’ll demonstrate a montuno over Am–E7. As I outline the two chords, I’ll lean heavily on the note F. Against the E7 chord, the F functions as a b9. This creates a nice tension that makes E7 want to resolve to the Am. Delaying the resolution of the E7 chord for two bars really helps heighten this tension.

As with any style, you need to listen to the masters and imitate what they do. Start with Tito Puente and work your way forward and backward from there.