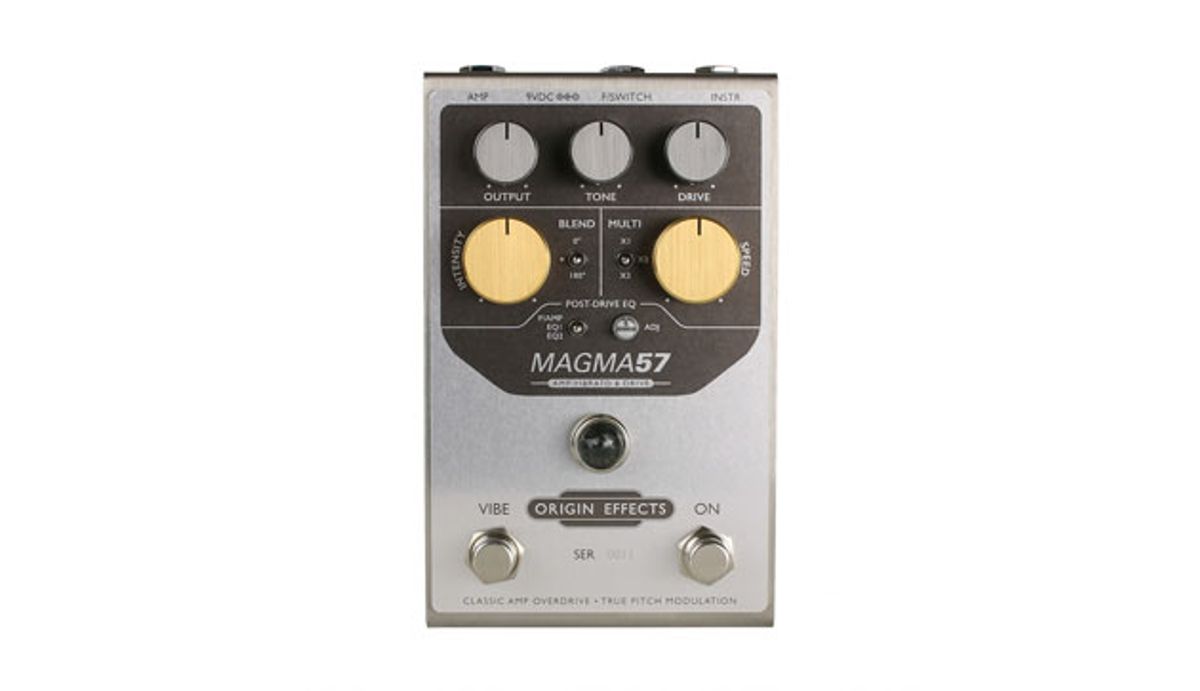 The new stomp aims to meticulously recreate the vibrato and drive from a legendary '50s Magnatone amp.

Based on the celebrated RevivalDRIVE platform, this new pedal’s amp circuitry delivers a range of stunning clean and overdriven tones inspired by the original Magnatone combos, capturing the full complexity of these classic amps and their unique vibrato effect in a 9V- powered stompbox.

Thanks to a three-way Blend switch, the MAGMA57 is able to serve up not one but three distinct vibe effects. In addition to pure Magnatone-style pitch-shifting vibrato, the pedal lets you blend the wet and dry signals in phase to deliver authentic Uni-Vibe-style phasing, or 180 degrees out of phase to create a new, unique chorus effect.

The MAGMA57 also features Origin’s powerful Post-Drive EQ, which tailors the output of the pedal to suit the voicing of the amp you’re plugging into, as well as flat-response power amps, mixers and recording interfaces.

“When we got a few different vintage Magnatone amps up on the workbench,” explains Origin founder Simon Keats, “we discovered that we loved the vibrato circuit that’s found in the mono 260 and stereo 280 models but the smaller 213 Troubadour model, which has a more basic single-stage vibrato, sounds fantastic when driven hard. So, we decided to combine the best of both – the lush two-stage vibrato from the top-of-the-range models with the preamp, tone control and power amp from the Troubadour.”

While the signal path of this dual-6V6 combo is very similar to Fender’s celebrated Tweed Deluxe amp, this amp actually improves on that classic design. Unlike the Fender’s passive tone control, the Troubadour 213’s tone control actively boosts treble as well as cutting it. When paired with an output stage that gives a little less gain to the lower frequencies, this results in a much tighter, more solid overdriven tone. It’s rich and raspy, and the amp sags in a really pleasing way, with a character all of its own.

The MAGMA57’s ultra-responsive clean and overdriven tones and range of vibrato effects are backed up by a host of other features including separate footswitches to activate the amp and vibe effects, a three-way speed/tempo multiplier switch and an external footswitch input that enables tap tempo, remote vibrato on/off and direct compatibility with a range of pedal switching systems.