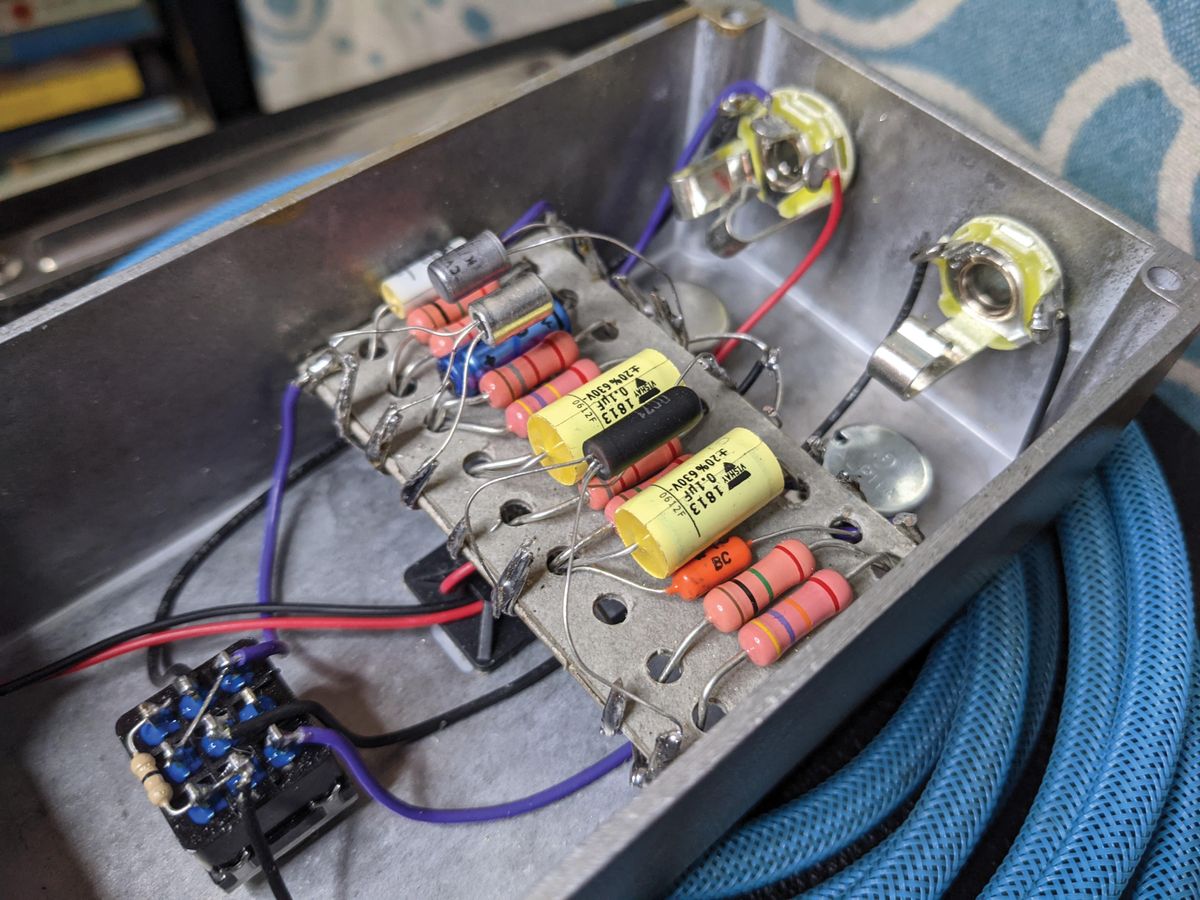 Here's a look inside the clean and elegantly handwired interior of a Collector Effector Tone Bender homage.

How today's vintage-authentic pedal builders meticulously recreate the dirty sounds of the past.

Stompboxes are made so, so many different ways—especially when it comes to the construction of the circuitry inside. Most builders today use modern surface-mount technology, others adopt the older method of using through-hole components, and some employ a mixture of both to create their circuits.

But there is a growing league of builders out there who specialize in making classic renditions of fuzz and dirt pedals the old-fashioned way: point-to-point style, completely by hand. What this means is that instead of the parts being soldered to a circuit board, they are connected directly to each other—the same way many vintage amplifiers were built, and a method still used by many high-end boutique amp makers.

The enclosures for these pedals are often fashioned to pay homage to the look of the stompboxes of yesteryear, complete with that relic'd patina and sweet name badge. Often, the aesthetic and art of this style of building pedals produces quite elegant results, both sonically and visually.

The circuits inside typically include just a handful of parts. The heart and soul of the process involves hunting down period-specific components (ideally, parts from the same time period as the parts used in building the original pedal) that must measure within a certain range and be meticulously tuned to each other. After all, it takes just the right combination to produce those ripping, classic fuzz tones we all know and love. Many point-to-point builders salvage parts out of broken electronics from the 1950s and 1960s, while simultaneously searching the web for new-old-stock, or NOS, components. Most of these components are long out of production, so there's quite a bit of treasure hunting involved in the production of these units. But troves of transistors and other components from the '60s and earlier can still be found … with luck and good intel.

"I feel like it's better to create boxes that will outlive me and be serviceable forever." —Patrick Brown of Collector Effectors

I recently spoke to two of these dedicated pedal revivalists to get some insight on their motivation and methods. Patrick Brown of Collector Effectors, based in Greensboro, North Carolina, builds his fuzzes—Buzzarounds, Tone Benders, Fuzz Faces—point-to-point, just loaded with gorgeous old parts, all neatly and perfectly arrayed. I asked Patrick what inspires him to build old-school while putting his own twist on things aesthetically.

"I think it's cool when people kind of take a classic and refine it," he says. "There's something great about getting that primitive gnarly-ness. I also like the idea that a unit can be repaired a few times with the old through-hole parts. I don't like the idea of a disposable circuit. I feel like it's better to create boxes that will outlive me and be serviceable forever, rather than go to a landfill, which is where unused tech ends up."

Across the Atlantic Ocean, in Granada, Spain, César de Vicente from Lo-Fi Mind Effects is also dedicated to making pedals of the past—with a psychedelic vibe—part of the present day, with takes on the Rangemaster, Fuzz Face, Tone Bender, and more. His enclosures have an appealing and often weathered industrial look. I asked him what he finds appealing about old-school point-to-point builds.

This may look like a wall of junk electronics, in the Lo-Fi Mind Effects workshop, but as a resource for vintage transistors and other parts, it's solid gold.

"I like all kinds of constructions—designing PCBs and tagboards. But point-to-point has something special. The first time I saw the insides of a Hiwatt DR103 amp, I was mesmerized. Since then, I always try to build something that could match that beauty."

César has a wall of ancient, gutted radios in his workshop. The piles span from floor to ceiling, and they're part of his formula for finding vintage components. He rescues the rare-as-hen's-teeth transistors and other parts from these broken radios and uses them in his pedals. And he says he might even use the radio enclosures to build little amps someday.

If you want to get a better appreciation for point-to-point work, take a close look inside a vintage or new-build old-school pedal the next time you've got its bottom cover off. You just might be inspired.
From Your Site Articles
Related Articles Around the Web
state of the stomp