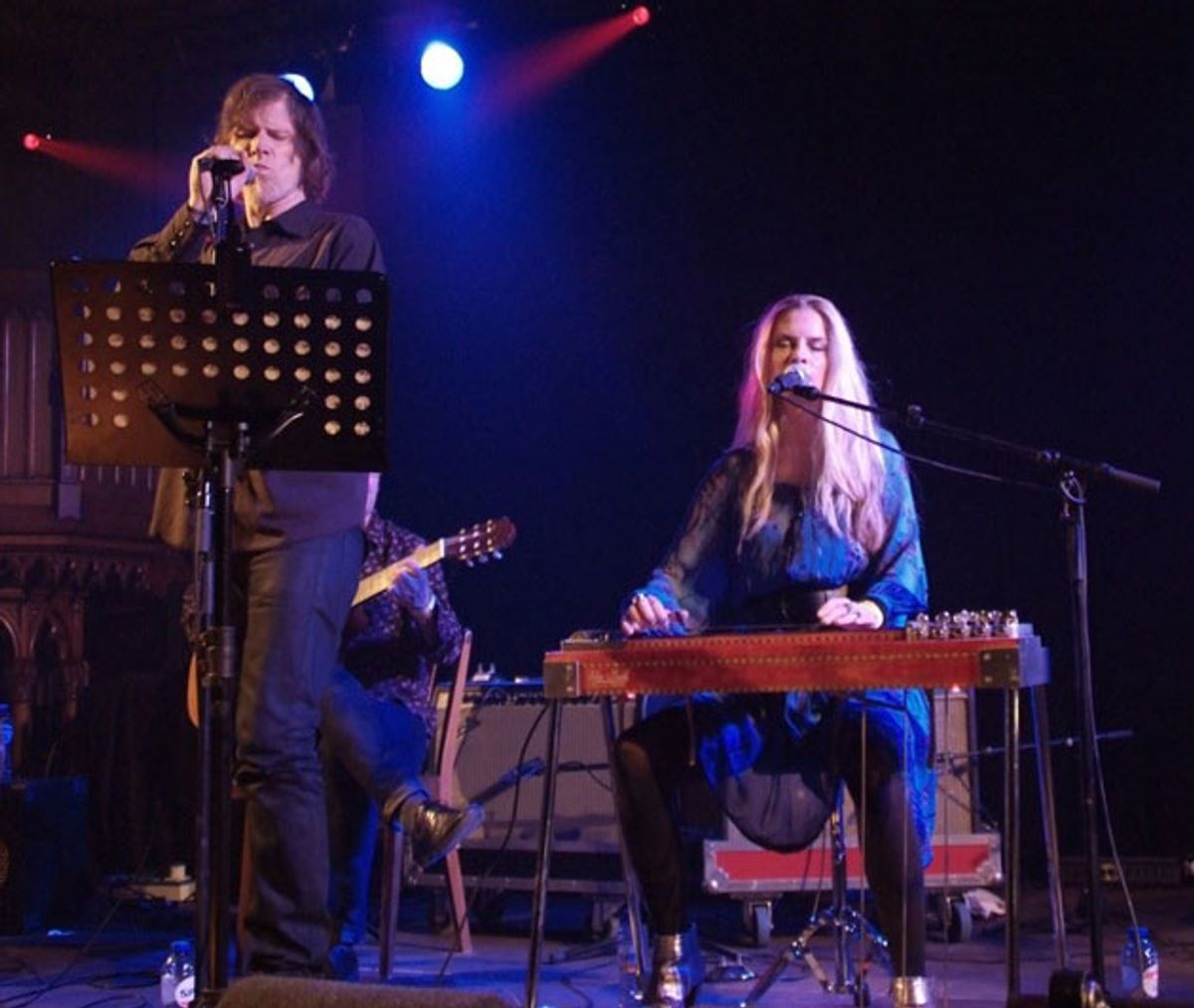 Few instruments proffer as much emotional depth and unchecked possibility for expression as a well-piloted pedal steel. From lush textural flourishes to virtual singing, the instrument can conjure an incomparable range of sounds via its complex guts of rods and pulleys. For many, becoming a proficient pedal-steel player can prove a most difficult dragon to chase, but the artistic dividends are immense once the beast is tamed.

The instrument has its share of established heroes, ranging back to its primordial days in the golden era of American country music, but few have ventured away from those traditional sonic tropes with the zest and imagination of Denmark’s Maggie Björklund. Björklund’s approach to pedal steel is as unconventional as it is breathtaking. She often sounds as if she might be the progeny of Daniel Lanois and Bill Frisell—a self-contained avant-jazz post-rock orchestra with a compositional mind and gossamer vocals to match.

Given that, it’s no surprise that Björklund has captured the attention of a host of remarkable artists, including Mark Lanegan, X’s John Doe and Exene Cervenka, and Jack White, who hired her to perform on Lazaretto and its subsequent tour. Björklund also just released her second solo album, the evocative and haunting Shaken. A masterpiece of aural cinema that owes as much to Morricone as to Mozart, the album should solidify her place among the greats of the alt-Americana movement.

“I was playing around with some pull-offs and some bouncing things … and I just stumbled across that lick and loved it. Then it was just like making a sandwich: I piled things on top of it, recording myself and playing on top of that.” —Maggie Björklund

How did you get started on pedal steel? Aren’t they difficult to get ahold of in Denmark?
Yeah, it’s a really rare instrument in almost all of Europe. I started out as a guitar player, and I played a lot of country music, but I was always really curious about other instruments. When I went to a music store, I would always try out the banjo or the mandolin or whatever was there, just to see, “Hey—what’s that sound like?”

I was always really intrigued by the pedal steel but, of course, I didn’t know anybody who played it, and the only times I saw it were when an American band would come through town. I had a friendly acquaintance that played, and one day he said, “I have this student model sitting at home—why don’t you buy that from me?” I said, “Yes! Let me buy that!” I regretted that day for a few months, because it was so hard to figure out how to play it. But I eventually fell in love with the instrument. It requires a lot of coordination with your feet, your knees, your fingers, your eyes, your ears—everything is engaged in playing it!

That track, in particular, features a very unconventional steel lick. How did you come up with that part?
It’s made up of that loop lick you hear through almost the whole song, that boo-eep sound. I was playing around with some pull-offs and some bouncing things—because that’s fun to do sometimes—and I just stumbled across that lick and loved it. Then it was just like making a sandwich: I piled things on top of it, recording myself and playing on top of that. It came to me fairly quickly once I had that first lick.

You certainly have an unconventional approach to the instrument. How did you develop your style?
I think I don’t play conventionally because I wasn’t born and raised in America. I have a different cultural background. I didn’t hear the steel guitar for the whole of my upbringing, and it was not until I got a little older that I noticed the instrument. Since nobody around me played it, I had to teach myself. I think you can hear that I grew up on European music, like classical music, Danish traditional folk music, and stuff like that. Those things shine through in my way of playing. I can’t play like they do in Nashville. I love the way they play, but I was not born and raised with it, so it’s unachievable for me to play like they do. I had to come up with my own playing style.

There’s a common thread of melancholia in new Scandinavian country and Americana artists such as yourself and First Aid Kit. What do you attribute that to?
Denmark and Sweden have a lot of culture in common, and we’re deeply rooted in darkness and light—long, dark, cold winters in which you sit down and wait for the spring to come. It has this kind of feeling of longing and loneliness, and a lot of our culture is rooted in that.

Which artists were particularly influential to your steel playing?
People like Daniel Lanois. The way he plays his pedal steel is really inspiring, because he doesn’t go the Nashville or traditional way either—he has come up with his own unique style. But some of the old cats like Lloyd Green and traditional players like that influence me through things like how their tones were so massive and so interesting. Of course they play wonderful stuff, but it’s something about the intensity of their tone that’s very inspiring.

Shaken has a very cinematic quality—it sounds more like a 38-minute suite than individual tracks. Did you write all of the tracks with one another in mind?
Oh, I love you—thank you! That’s perfect, and I would love it if people saw it like that! It was kind of tied together at the end. To get that quality of flow in a record, you need to place each song very carefully and pay attention to how they play up against each other, so that’s the next level of composing. It’s not just making a song: The whole album is the picture you want to make, more than just the individual songs. They’re placed very carefully in an order that enhances certain features in each song.

It’s a bit of a rarity to hear such a cohesive album when so many artists seem focused on singles instead of larger statements.
That’s a curse of the modern times, but I’m old-fashioned, and I’m going to stick to being old-fashioned. I might be out of fashion, if you want to call it that, but that’s just how I roll.

Tell us about the guitars you used.
I always play a 10-string Sho-Bud single-neck. That’s kind of my main steel guitar. I have a 12-string, but it’s too heavy for me to even lift up off the ground—and the double-neck I wouldn’t even know how to get into a case, because it’s just so heavy. So I stick to my 10-string, but I love it.

Is it a vintage model?
I think the one I used for the record is from the late ’50s. The pickup and body are original, but some of the mechanics are changed. It runs like a Jaguar: smooth and just perfect!

Do you service your guitars yourself? There probably aren’t many steel guitar techs in Denmark.
There are zero in Denmark, and I haven’t found one in Europe either. Whenever I get the chance to travel near Nashville, I bring my steels for a tune-up. I go to a guy named Jeff Surratt at Show Pro Custom Steel Guitars.

Which nylon-string and standard electric guitars did you use on the record?
One of the first good guitars I ever got was a Spanish guitar built by Manuel Contreras. It was imported from Spain when I was really young. I love that guitar—it has such warm, melancholy tone. We also used my Fender Jazzmaster on some stuff. It’s a vintage ’60s model.

Do you play much standard electric live?
Yes, I do. I bring an old Gretsch Chet Atkins model with me.

What amps did you use for the album?
We recorded in Bristol, England, and we used the studio’s amps. I mostly used an old Vox AC30 and, I think, a Fender Twin. Right now, I actually use a Marshall amp—an old combo from the ’70s. It’s great with steel guitar! It has really nice core tone, and it doesn’t get too crazy or anything with the overdrive. It just breaks the edges a little.

How about effects?
I always have some kind of distortion pedal and a delay pedal or tape echo if I’m in Europe with my big setup. I also sometimes use an Electro-Harmonix POG.

Do you favor any particular distortion pedal?
Yes. It’s by Xotic FX—the BB Preamp. It’s perfect for steel! I have been looking around for a good distortion pedal for so long, so I was so happy when I found it.

Do you have a favorite track on the album?
Can you ask a mother to choose between her children? I wrote big parts of the album while my mother was very sick and dying, but I found out that a big loss is also very tightly connected to big love. The whole thing about saying goodbye to a person in your life for good is that it’s really about love. So, in that sense, there are some very good things to be found in a situation you would rather not have. But “Fro Fro Heart” really nails down
that feeling for me.

The album has a lot of intricately placed instrumentation and a very sophisticated use
of negative space.
Since I grew up in the countryside, my parents listened to mostly classical music. That had a big impact on how I see and hear music. I’m not a particularly A-A-B-A kind of person, if you know what I mean. My brain is more wired in the way of classical pieces, where you don’t necessarily repeat yourself in the same piece.


Were any particular composers especially influential?
I have a special place in my heart for Mozart. I know people call him a lightweight, but he’s like the Beatles—you can keep finding new levels in his music. He used a lot of negative space and things like strategically holding off instruments and silence and such. But also composers like [Giuseppe] Sarti and [Claude] Debussy—people who make really weird, complex music. I love that!

Maggie Björklund and her quintet play the haunting, captivatingly quirky new track “Missing at Sea” before a rapt audience in Copenhagen.

On the opposite end of the musical spectrum, you’ve recently played with Jack White. How did that relationship come to be and what was the experience like?
Well, I love Jack White’s music—he’s one of the best there is, and he’s an amazing musician. So it was just fantastic to work with him. He sought me out and needed somebody like me, so it worked out great! I played on four or five tracks of the new album, though I can’t remember which ones at the moment.

You’ve collaborated with many interesting artists, including Jim Barr of Portishead, John Parish, and Kurt Wagner from Lambchop on this album. What is it you enjoy most about that process?
Well, to be so fortunate to work with such great musicians and artists. It’s really inspiring because it opens up your world more than it closes it down. It means a lot to be in such a situation with these amazing musicians, and it automatically shows itself in how you play. It opens up your vision.