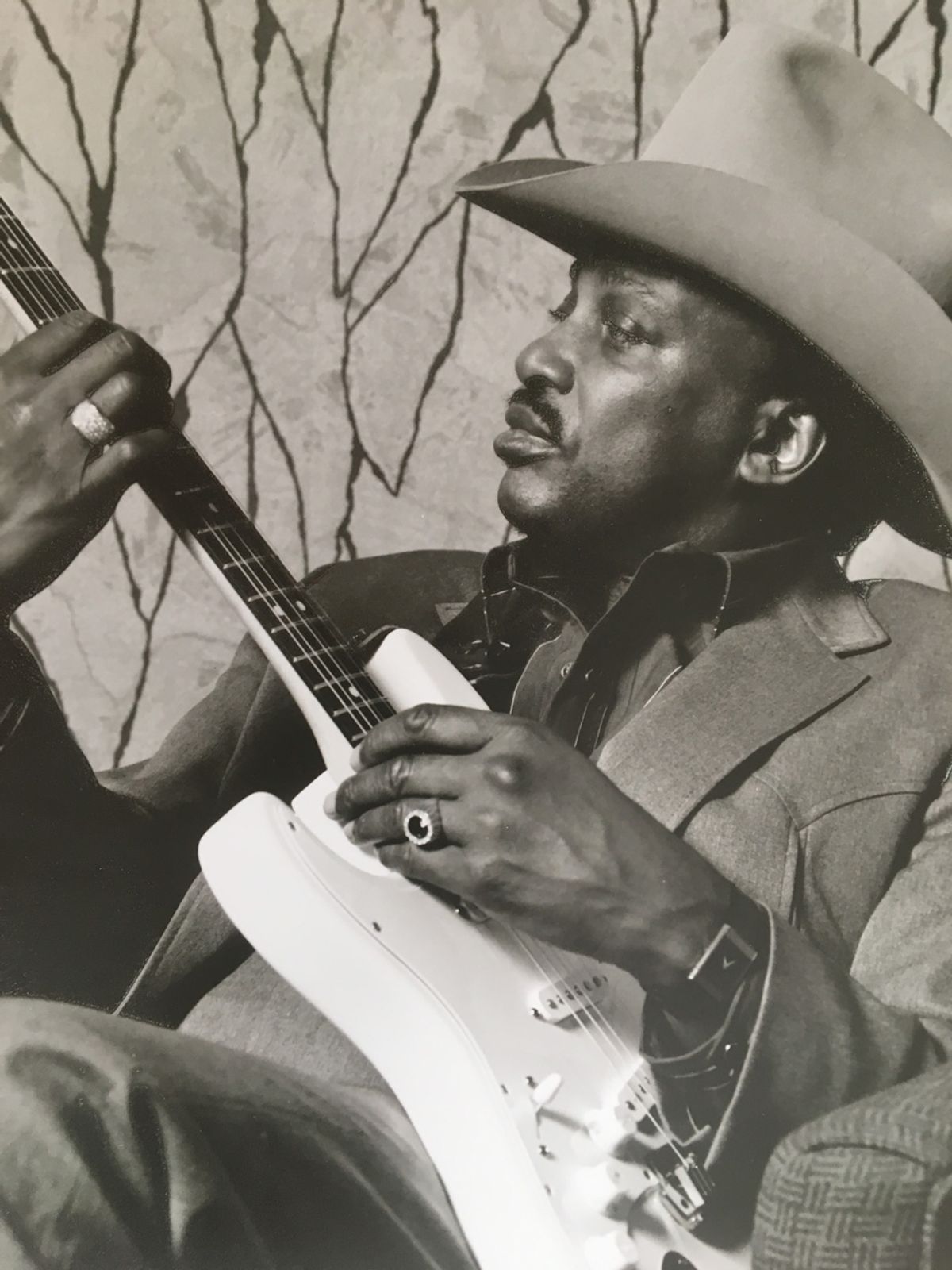 Video
During the recording of 1994’s Ain’t Enough Comin’ In, Rush briefly returned to the Fender Stratocaster—the model of guitar that can be heard on his early, foundational hits, including “I Can’t Quit You, Baby.”

The influential bluesman raised the bar for 6-string virtuosity, influencing Clapton, Page, Beck, and a host of others while adding classic songs to the American music canon.

Check out a lesson on Otis' mastery.

For guitarists, seeing Otis Rush in peak form was like grabbing a lightning rod as it was struck. At a show I witnessed in a New York City club in 1998, Rush was entirely consumed by his music, singing and playing with an intensity so raw and powerful that it transformed his pickup band into an extension of his own consciousness. They were in sync with every glance, raised shoulder, or nod that signaled the modulations, dynamic shifts, and tempo changes he wove through his performance. And when Rush exercised his shimmering vibrato or deep downward southpaw bends, or took off on an incendiary, unpredictable solo on his Gibson ES-335, listeners erupted or gasped or simply stared with the kind of awe typically seen at the rim of the Grand Canyon or during a solar eclipse. It was that damn good.

All of that ended in 2003, when Rush suffered a stroke and was compelled to cease performing. And now, 15 years later, the venerated blues legend that was a profound influence on Eric Clapton, Jeff Beck, Jimmy Page, Peter Green, Jimi Hendrix, Bonnie Raitt, Ronnie Earl, Nick Moss, and a host of other 6-string masters, and was embraced as a peer by Willie Dixon, Buddy Guy, John Lee Hooker, and Muddy Waters, has died. Rush was 84 when he was claimed on Saturday, September 29, by stroke-related complications.

Rush was born in Philadelphia, Mississippi, on April 29, 1934. But his career ignited in a garage on West Roosevelt Street in Chicago’s rough west side in 1956. On a July day, he recorded his first single with Eli Toscano, the owner of Cobra Records. Musicians sat or stood behind a single microphone in Toscano’s claustrophobic studio, separated by a plate of glass from the recording console. When it was time for a guitar solo, the amp was rolled closer to the mic on a dolly. That debut single, which opens with Rush’s soaring high-wire voice and a tumble of notes cutting the air, was “I Can’t Quit You, Baby.”

Then, Rush was just 21. He’d moved to Chicago in 1949 with money from a good crop harvest financing his relocation. And he’d been discovered playing the tough clubs of the Windy City’s west and south sides by Willie Dixon, who also brought Buddy Guy and Magic Sam to Toscano’s attention. Rush, Guy, and Sam Maghett had a faster, more wiry, and altogether nastier approach than the artists Chess Records was recording at the time, including Muddy Waters and Howlin’ Wolf. These three guitarists would come to define the sound of the second generation of Chicago electric blues.

“It’s about playing what you feel. If I’m playing a solo in B, I might bend a note up to D just because I want to.”

The music of these youngsters was forged not in the Delta but in the pressure cooker of urban poverty and wage-slavery, and crowded living conditions and race-based police harassment. That desperate energy can be heard in the tracks of Rush’s career-defining singles from 1956 to 1962, including “My Love Will Never Die,” “All Your Love (I Miss Lovin’),” “Three Times a Fool,” “So Many Roads,” “Checkin’ on My Baby,” “Homework,” and “Double Trouble.” Another fan, Stevie Ray Vaughan, borrowed the latter title for his band’s name.

Rush became Cobra’s biggest star when “I Can’t Quit You, Baby” hit the streets. The single blasted out of windows on every block of Chicago’s African-American neighborhoods. It also somehow made it across the sea into the hands of Clapton, Beck, Page, John Mayall, and others who would lead the British blues movement in the 1960s. Rush first made it to Europe in 1966, as part of the American Folk Blues Festival, a touring concert series that ran from 1962 to ’66.

Even toward the end of his performing career, Rush was modest about his influential style. “I didn’t know what I was doing then, and I don’t know what I’m doing now,” Rush told me backstage at the original House of Blues in Cambridge, Massachusetts, in the late ’90s. “People will go, ‘How did you play that?’ It’s hard to explain, to me. I feel like I’m always hitting the wrong notes.” But thanks to his whip-crack intensity and his snaking chromatic soloing style, Rush had an undeniable way of making even the notes he felt were wrong sound perfectly and deeply right. Add in his ability to make strings quiver, control dynamics and tempo shifts on impulse, and improvise in ways that made even his oldest songs sound like pups in concert (plus his signature move of stopping a solo or melody line to hang on an extended chord), and his influence as a blues guitarist is entirely understandable. His soulful, stratospheric singing added even more fuel to the flame of his legacy.

After Cobra Records went broke, Rush jumped to the Chess label in 1960, where he cut “So Many Roads.” His next hit was 1962’s “Homework,” which became a staple of the J. Geils Band. Even as his career began to languish, Rush’s “All Your Love” became the opening track on John Mayall’s 1966 album, Blues Breakers with Eric Clapton, and “I Can’t Quit You, Baby” was a blasting centerpiece of Led Zeppelin’s 1969 debut, with Page and Robert Plant shedding blood in their performance. That same year Rush got a brief boost when another acolyte, Mike Bloomfield, took him to Muscle Shoals to record Mourning in the Morning, where Rush reprised the high drama of “My Love Will Never Die” and added another classic original, “It Takes Time,” to his repertoire.

In the following decades, Rush’s career was a rollercoaster of mostly indie and European record labels with mediocre distribution, periodic absences from the stage, inconsistent performances, and health troubles, including diabetes and bouts of depression. After 1971’s Right Place, Wrong Time, Rush ceased recording for much of the 1970s and early ’80s. (“It got discouraging, discouraging, discouraging,” he explained.)

Rush in his prime, wailing his “I Can’t Quit You, Baby” on the American Folk Blues Festival’s traveling stage in 1966, is the very embodiment of the second generation of electric blues. He snatches the torch from the likes of Muddy Waters and Howlin’ Wolf in a solo that’s a scalding fusillade of notes, balanced by the verses’ elegant pentatonic lines that cry in reply to his dark-angel singing. In his slick shades, skinny tie, and a sweater Rivers Cuomo might once have killed for, Rush is also the absolute embodiment of cool.

Rush’s last truly essential album was 1994’s Ain’t Enough Comin’ In,a burly affair buoyed by gargantuan tones from his Gibson ES-345—another of the Gibson semi-hollowbody guitars he preferred for much of his career—and his then-new-found affection for Mesa/Boogie combos. That disc’s sessions also found him tracking with a Fender Stratocaster, the model of guitar he used back in the Cobra days. And for the next nine years, until his stroke forced him into retirement, Rush managed to summon the virtues of his most articulate playing during his finest onstage performances.

Elaborating on his style backstage during our conversation at the House of Blues, Rush declared himself a firm believer in the less-is-more approach. “I figure if you put in every note you can for five minutes, it’s gonna be hard for people to figure out,” he said. “You’ve got to bring out your notes slow and easy, like in ‘All Your Love.’”

Rush had also become a serious jazz fan by then, which explains why his onstage solos became increasingly chromatic fireworks displays as the years went by. “I’m crazy about Kenny Burrell,” he explained. “I’ve learned some of his tunes, like ‘Chitlins Con Carne,’ and I’m crazy about Stanley Turrentine on saxophone and [organist] Jimmy Smith. That’s one of the reasons I play out of key sometimes. I don’t worry about that. It’s about playing what you feel. If I’m playing a solo in B, I might bend a note up to D just because I want to.”

The exceptional traditional blues guitarist Ronnie Earl developed a longtime friendship with Rush, who was one of his mentors. “Otis’ music always really touched me because it was tormented and had this minor key, deep quality,” Earl told me in the early 2000s. “I was very struck by that and by his vibrato, which I was trying to learn in my room when I was starting out. He’s the king of that: He has the best vibrato of them all. It never fails to shake my soul up. I’ve heard him take a 12-minute ride with his guitar and never repeat himself. He’s like the Ray Charles of blues guitarists.”

Perhaps due to his stroke, Rush never experienced the kind of later-career renaissance that was enjoyed by Muddy Waters and John Lee Hooker, and that Buddy Guy continues to relish. Reflecting on his ’70s and ’80s hiatus, when Rush said he was mostly “shootin’ pool and livin’ off the land,” as well as dealing with the onset of his depression and diabetes, Rush explained that “I have a gift and I chose not to use it for a while. But it felt like God gave me a whuppin’ for that, you know. So I got back to it.”

“Let me tell you,” he continued, “being a blues musician is one of the hardest things you could ever want to do. But it’s sweet, too, if you make it.”