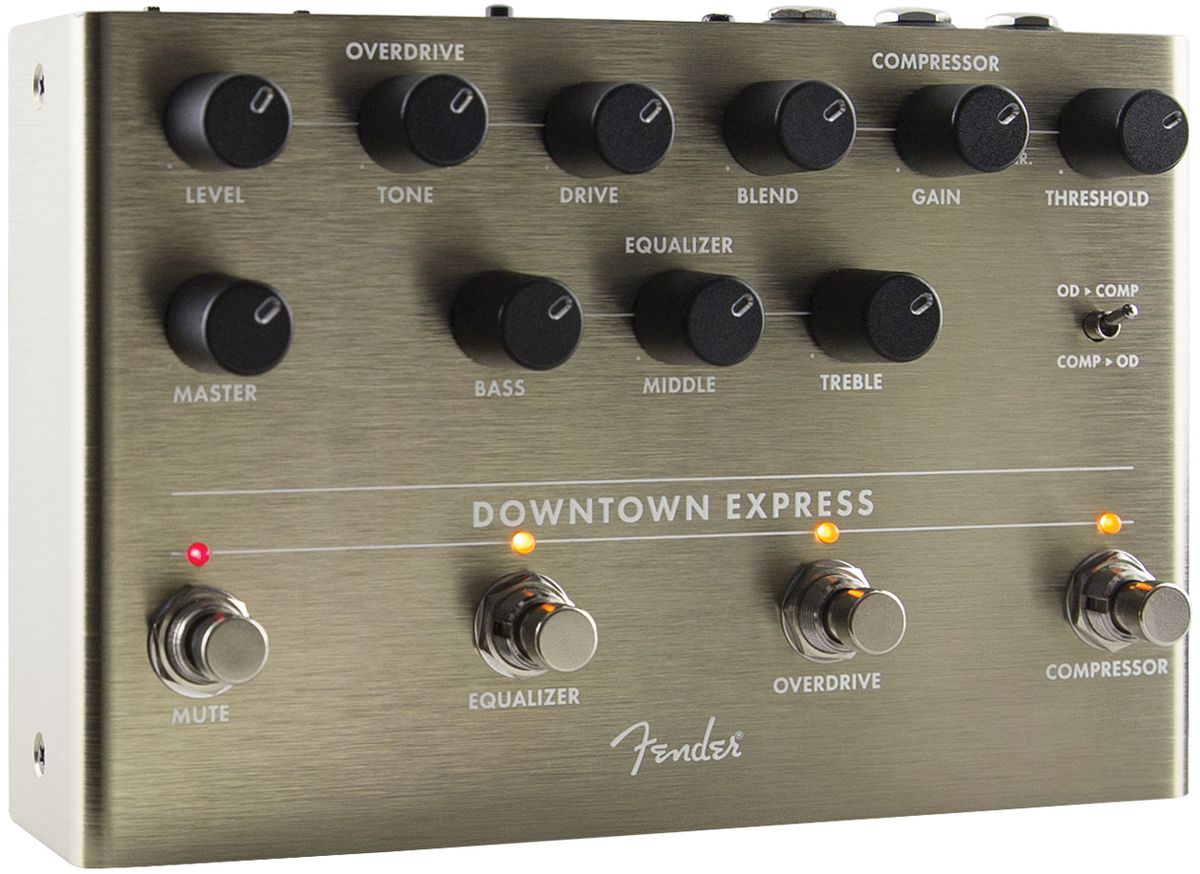 Three of the most useful tone tools for bassists in a tidy, variable-XLR-equipped box.

Fender has been quite busy out in the California sunshine, crafting pedals with lots of new offerings for our guitarist friends. But the company also recently rolled out a new pedal for us bassists—actually its first bass pedal ever. And instead of just a one-effect stomp, Fender decided to roll three useful tools into one stomp and call it the Downtown Express.

Expressway to Your Tone
With EQ, compression, and overdrive (as well as a variable-XLR out), the Downtown Express is a strong, practical jump into the bass-pedal pond. Establish the tone first, then start adding some modulations or delays down the line. The pedal’s layout is relatively easy to navigate with its three main sections clearly marked.

The control knobs are all LED backlit, which will make dialing up changes a snap on a dark stage. (This function can be turned off with a backside switch.) The individual footswitches for the effects illuminate in red (mute) or amber when engaged. I should mention that one of our test pedal’s footswitches was quite loose out of the box, since the lock washer inside wasn’t tightened. While I’d rather play through a pedal before opening it up, I made the fix and moved on.

There are a couple more features that really make the Downtown Express stand out, including the mini-toggle switch for choosing your preferred signal order for the overdrive and compressor effects. The other is the tonally flexible DI, which can be run with effects, effects and EQ, or pre-effects, so you can dial in one EQ onstage, and also let the FOH engineer mix a separate signal.

I had the great driven tones I had hoped to hear, from just a dusting of fuzz to searing overdrive.

All Aboard!
I plugged a passive Fender Flea Jazz bass into the Downtown Express, sent my signal through a PreSonus DAW, and used Ultrasone headphones for a true ear test. I started with the overdrive section and dialed in a small amount at a time, from a little dirt to full-on. The overdrive on its own wasn’t quite as expressive as I would have hoped and seemed just a little weak, but that all quickly changed when I engaged the EQ section. The OD really sprung to life with just a bit of low end and high end dialed in. I got the great, driven tones I had hoped to hear, from a dusting of fuzz to searing overdrive. When tracking, I would crank the tone and dial in a breath of drive for a hint of dirt, which really made my bass jump in the mix.

I appreciate the compressor’s wet/dry blend control, which let me get creative with different styles quite easily. Being able to get my dry signal in there to maintain integrity when I need it, and, conversely, run a super-squashed signal for another option, is something I like. The section’s gain control helped level out my signal effectively when pushing the threshold to the max. As with the overdrive, using the compressor in tandem with the EQ really helped its tones come alive.

The Verdict
Fender thought the Downtown Express through, in its features and real-world applications. I appreciate the variable DI, which is practical for any playing situation. I would have preferred the overdrive to sound a bit more robust on its own, but, again, the EQ is the secret sauce for bringing out the best from both the overdrive and compression sections. If you’re in need of all these effects and a DI—and want them all in a wallet-friendly manner—you might consider punching your ticket for the Downtown Express. It’s a solid contender for a new gig-bag addition.