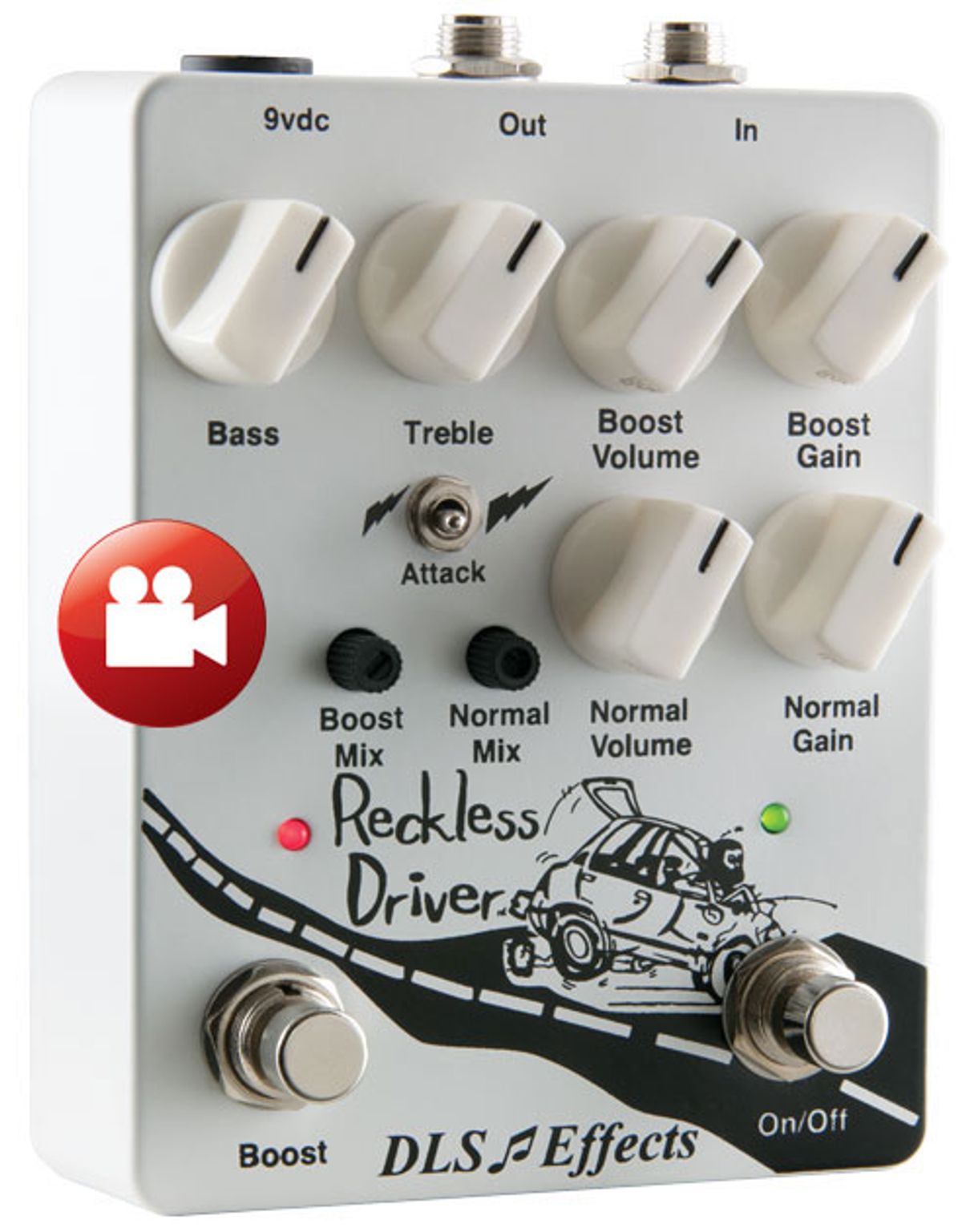 This 2-channel OD/distortion delivers a wide range of dirty colors.

DLS is famous for their delay and modulation effects—so much so that to see a new overdrive among their pedal roster verges on, well … odd. But in classic DLS style, the new dual-channel Reckless Driver isn’t just another generic OD: It generates boost, overdrive, and distortion in many colors—from nearly transparent to crunchy—all with a remarkable dynamic sensitivity.

Refined Recklessness
While the pedal’s name hints at the potential for sonic havoc, there is nothing reckless about the pedal’s design. It feels meticulously engineered and uses top-shelf parts, like Amphenol jacks and 3P3T switching. The craftsmanship is impressive. So is DLS’ ability to cram so many controls onto a relatively compact surface without inducing total confusion. There’s volume and gain for each channel (the higher-gain “boost” channel and the curiously named “normal” channel), a shared EQ section consisting of bass and treble knobs, two mini knobs for each channel’s wet/dry mix, a toggle switch for attack, and two footswitches. Under the hood you’ll find internal trim pots for input stage and distortion input stage.

The Reckless Driver feels very much like an extension of your hands and instrument.

Pedal to the Metal
I tested the Reckless Driver using a Gibson SG and a Music Man Axis Sport through a Fender Super-Sonic combo and a solid-state Roland Jazz Chorus, and the extent to which you can tailor this pedal to amps of such radically different circuitry is remarkable.

The mix knobs let you balance how much clean signal you want blended in, which significantly expands the Reckless Diver’s palette. With the normal mix control set in the middle and the normal gain set just shy of noon, I got a very pleasing, edge-of-breakup, low-to-mid gain sound that highlights the harmonic detail in open-position chords.

Even at this gain level, the pedal has great range. The unit’s touch sensitivity is very perceptible and musical, and allows you to add texture to different sections in a song based on the intensity of your attack. The harder you hit the strings, the rattier the overdrive sounds.

Cons:
Shared EQ. Getting the best sounds for your rig may take some tweaking.

But a light attack or thumbpicking can make the pedal sound downright dignified. Indeed, the Reckless Driver feels very much like an extension of your hands and instrument. With the gain set low, the normal channel works well as an always-on signal enhancer that can thicken and excite an otherwise anemic amp tone.

The circuit routes the normal channel into the boost channel, and the drive from the combined channels generates some of the most complex and natural amplifier overdrive I’ve ever heard with a pedal in the mix. Individual notes bloom and decay with a very organic feel.

Maxing the gain on both channels yields a fairly aggressive distortion. But where a lot of pedals would drown dynamics and overtones in a sea of compressed, dark gain, the Reckless Driver is articulate, clear, bright, lively, and open sounding. Even with the treble all the way off and the bass all the way up, there’s plenty of note-to-note definition and room for picking dynamics.

You can tailor how the Reckless Driver interacts with your picking by using the attack toggle switch. With the switch to the left, you get a softer and warmer attack that works well for fusion and smooth-but-heavy blues. Flicking the switch to the right adds brightness and a faster attack. The shift can be subtle but you can definitely feel the difference.

The Verdict
There’s no shortage of dirt boxes out there. And there’s some very good 2-channel overdrive and distortion units at great prices. But it’s not easy to find one that offers as broad a range of natural OD and distortion—sounds that can bring your playing to life—as the Reckless Driver. Given the unit’s high quality and versatility, it’s an excellent value too.