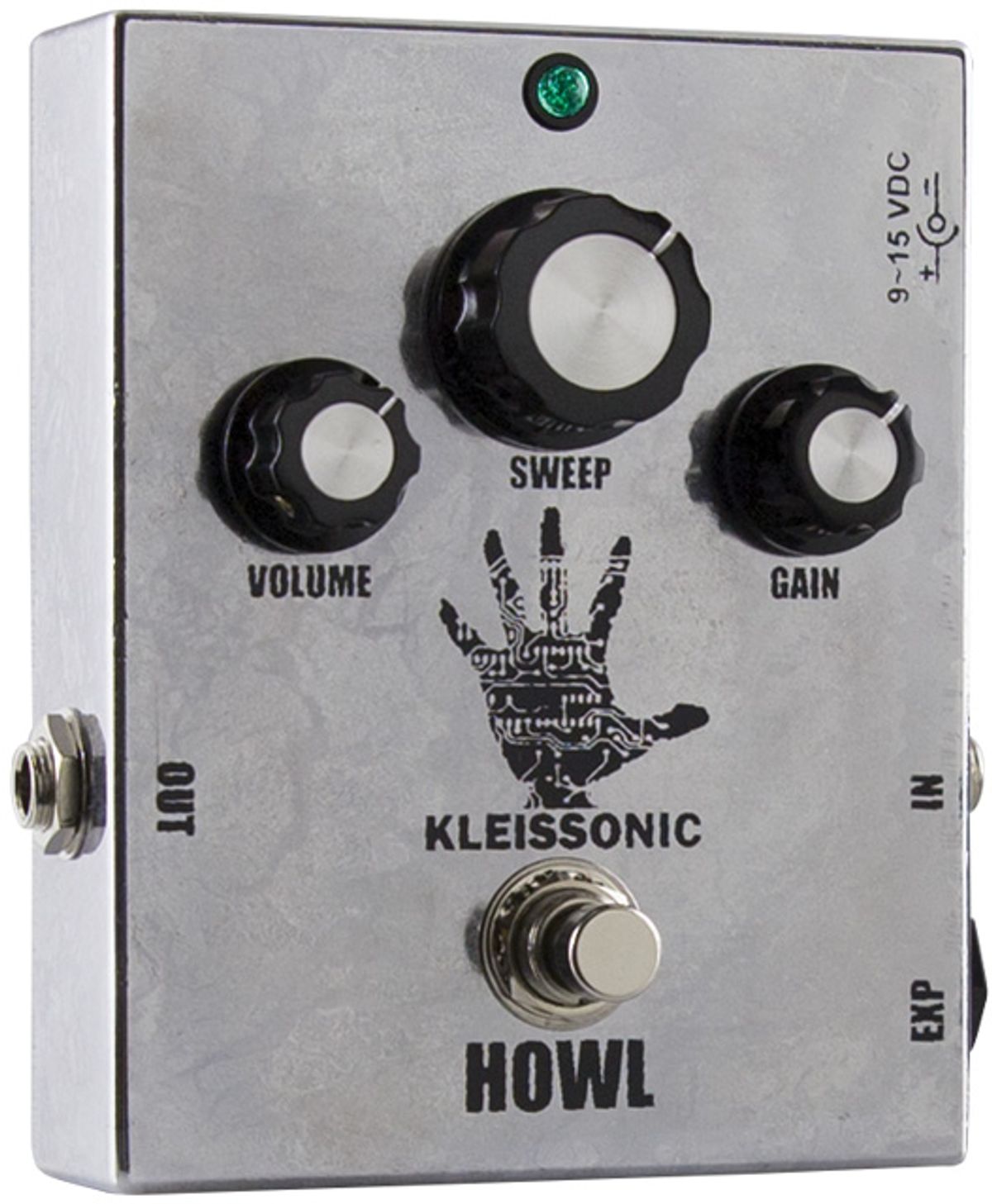 I have a friend that hates phasers. And while I think his sentiments are rather generalized and harsh, sometimes I sorta see his point. When you switch a phaser on, it runs through its phase cycle until you turn it off again. It sounds trippy, sure, but leaves you a semi-passive participant in tone-shaping while the phaser just … phases. I don’t suspect that perception of a phaser’s limits is a widely held opinion. And being an enthusiastic phaser fan I certainly wouldn’t call this aspect of phaser performance a problem. But to whatever extent it is an issue for the guitar players of the world, the Greece-built Kleissonic Howl might be the solution.

The Howl, unlike most phase shifters, has no LFO. That means that there is nothing in the pedal to drive a phase sweep or control its rate. What Kleissonic offers instead is a means of routing your signal through a specific, fixed point of a phase cycle that you determine with the pedal’s sweep knob or via manual shifting with an expression pedal (not included). In this sense, the Howl crosses some of the functionality of a wah with the sonic flavor of a phaser. The result is often unique tones that hint at both effects without recognizably being either.

Freeze the Phase
The Howl is not the first pedal to utilize the tone potential of fixed or “frozen” phase points. Electro-Harmonix Bad Stone made use of the concept to great effect decades ago, and any cocked wah effect achieves similar results by locking in on a fixed point in a filter sweep. It’s not the first phaser to offer manual sweep functionality, either. Moog’s legendary, but very expensive MF-103 is a great tool for this. But Kleissonic offers more manual control than the Bad Stone. It’s much less expensive than an MF-103. And many of the sounds the pedal generates are unique enough to prompt aural double-takes and induce a sense of haze and mystery. Plus, phase shift isn’t the only effect in the Kliessonic. There’s also a drive section that can range from clean boost to near-fuzzy textures.

The Howl crosses some of the functionality of a wah with the sonic flavor of a phaser.

The Howl’s simplicity is one of its greatest assets. If you crack the enclosure open to access the trimpots that determine phase frequency range and calibrate the stomp to your expression pedal, you’ll find a clean, well-ordered printed circuit affixed to the enclosure via the pots and independent of the jacks and footswitch. For all the extra space though, there’s no battery option.

Ease describes the pedal’s functionality, too. If you don’t have an expression pedal attached, you merely pinpoint your preferred phase-sweep point and its attendant tonality via the sweep knob, and set the level and gain to taste. If you have the pedal attached, you control the sweep as you would control the filter on a wah. The resulting tones are often more analog synth than pedal-like, though you can summon cool twists on envelope and wah filter tones as well. I also grew to like the warm lo-fi qualities of the gain control in its higher reaches, but occasionally wished for either fuzzier textures or rounder, warmer overdrive tones. Thankfully, the Howl interacts with fuzz and overdrive with civility.

The Verdict
Kleissonic is a resolutely creative pedal builder. And the Howl chases a very cool musical idea in a simple, creative way. Many of the pedal’s tones evoke the sounds of cocked wahs, envelope filters, and filtered or aggressively EQ’d overdrive. But they also sound cutting, distinct, and unique, which can be gold in a studio. What you’re willing to pay for those sounds is another matter. While there’s no doubt that the Howl is a well-made, original design, it’s expensive for a relatively simple circuit. And the fact that so much of the Kleissonic’s functionality depends on an expression pedal that’s not included also makes the price seem high. But if you favor effects that make uncommon-to-freaky sounds more readily than clichéd or classic ones (or you’re that weird friend who hates regular phasers), the Howl could be well worth the price.