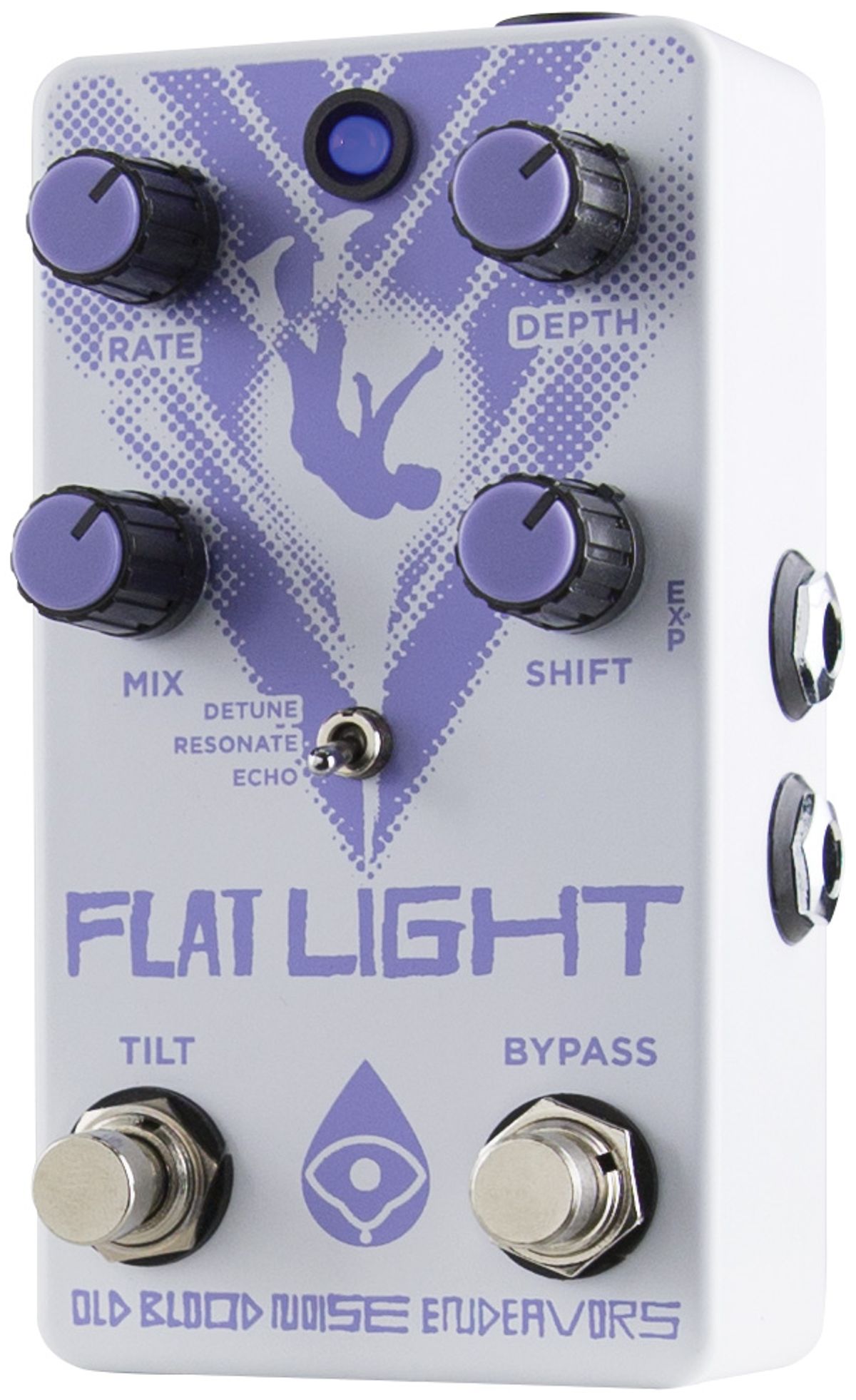 A flanger with a few tricks up its sleeve.

The latest release from Old Blood Noise Endeavors is the Flat Light, a flanger with cool and trippy extras. It’s a digital effect—the popular Spin FV-1 chip generates the pedal’s pitch shifting and delay. The Flat Light resides in a standard 125B-sized enclosure and runs on the usual 9V power supplies. There is no battery compartment.

Flange Facts
It’s easiest to understand the Flat Light’s expanded take on flanging if you know how the basic effect works. (Skip ahead if you know this stuff.) Flangers mix your dry signal with a very slightly delayed duplicate of the signal. This offset creates phase conflicts between the two signals, often resulting in hollow-sounding and/or clangorous tones. That signal is then pitch shifted, which produces rich chorus-like sounds at modest settings and mad whoops and screeches at high settings. A flanger’s feedback control makes the delayed signal repeat (though it happens so quickly that you don’t hear individual echoes). High feedback settings yield the jet-engine whooshes we associate with flangers.

The Flat Light has the usual flanger controls: depth and rate (of the pitch shift) plus mix (the wet/dry balance). In the Flat Light’s traditional flanger mode (called “resonate”), the shift knob controls feedback. Here you get all the usual flanger effects, from subtle choral thickening to otherworldly clanks and drones.

Other settings produce intriguingly chaotic noises you couldn’t coax from a conventional flanger.

They Put a Twist on It!
So far, so good—but the Flat Light’s toggle switch provides two additional modes. In detune mode, the delay is pitch-shifted. Not in the usual small increments, but as much as an octave up or down. Here, the shift knob controls the amount of transposition rather than feedback. At some settings this mode behaves like an octave pedal, with clear up/down shifts. Other settings produce intriguingly chaotic noises you couldn’t coax from a conventional flanger.

The third mode, echo, adds longer delays to the wet signal. This unlocks a raft of quasi-reverb effects—an eerie alternative to traditional delay and reverb. Here, the shift knob regulates delay time. The flanger depth is fixed, and the depth knob controls resonance instead.

Quality and Coloration
The Flat Light definitely sounds digital, without the distortion and coloration of vintage flangers with their bucket-brigade delay chips. That’s not necessarily bad—it’s just a different flavor. Still, tones are far from pristine. The pitch shifts are decidedly lo-fi, with perceptible bleating. The Flat Light might not be a great choice if you seek a retro flanger’s warmth, but the lo-res transpositions have a unique color that noise-oriented players may dig. Meanwhile, the dry signal isn’t perfectly transparent. Even with modulation turned off and a 100 percent dry setting, tones acquire a midrange bump at around 250 Hz. This low-mid boost can make the high end seem dimmer, though again, it has its own character.

Two more cool features: There’s an expression pedal jack (pedal not included) to pilot the multi-mode shift knob by foot. And a dedicated tilt footswitch momentarily maxes out the shift knob for as long as you keep your foot down. It’s handy for unleashing momentary shrieks and clangs, which might sound bitchin’ while building up to a big downbeat.

The Verdict
For better or worse, the Flat Light is no old-school flanger. Its tones are more icy than warm. On the other hand, its three modes venture well beyond the usual flanger vocabulary, and often to fine effect. Chances are this is a better choice for naughty noisemakers than for retro cork sniffers.