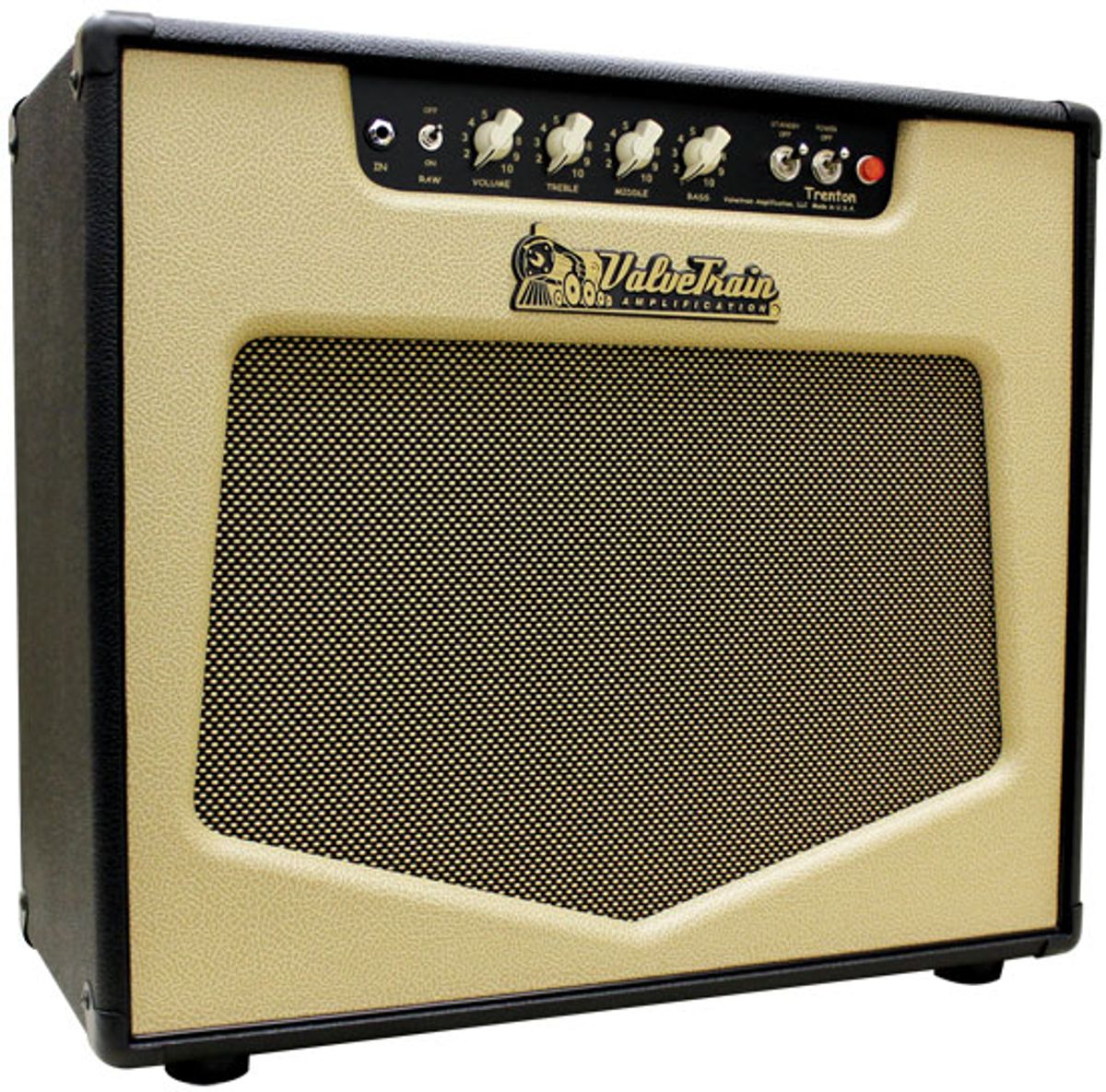 ValveTrain''s 16-watt, 6V6-powered Trenton amp stands out from under-20-watt pack with a strong musicality, as well as versatile and musical tones that go way beyond just delivering high saturation at low volumes.

ValveTrain has always had their heart in making affordable, American-built amps—often in the classic Fender blackface vein. Because—let’s face it—like a well-tailored black suit with narrow lapels, Fender’s blackface amp designs are timeless both for their own sonic signature and because the pure tones they generate can be used as a clean slate from which to shape tones for practically any application and style.

The 16-watt, 6V6-powered Trenton amp is ValveTrain’s newest entry in the popular under-20-watt pack. But it stands out from the pack with a strong musicality, as well as versatile and musical tones that go way beyond just delivering high saturation at low volumes.

Stylish and Stealthily Potent
While the earliest amps from Florida-based ValveTrain were typically function over form, the spiffy-looking Trenton combo is subtly stylish and will look great in any backline or studio—or living room, for that matter. It can be configured as a 1x12, 2x10, or head, but here we’re reviewing a 2x10 loaded with custom 25-watt Weber 10" speakers. The Trenton’s relatively spare control set—which looks a little like a Fender tweed control panel flipped over and moved to the front panel—has “chicken head” knobs for volume, treble, middle, and bass, in addition to a raw switch that effectively bypasses the EQ.

Experiments with the raw switch transformed the amp into a roaring tweed Fender Deluxe, but with a barking quality that hinted at AC30 territory—a very cool tonal convergence!

From Clear to Crazy Horse
My first test with the Trenton was at a band practice. Because reverb and tremolo are a big part of my personal sound and the Trenton has neither, I used it in combination with my trusty blackface Twin Reverb, a ’65 Jazzmaster, and an A/B Box. I was impressed with both the clarity and thickness of the amp, and though it’s obviously less powerful than the Twin, it filled the rehearsal room with huge chunks of additional clarity without any harshness whatsoever.

The EQ section made significant adjustments easy, with a minimum of fuss, and the controls have a very wide and effective sweep. Experiments with the raw switch transformed the amp into a roaring tweed Fender Deluxe, but with a barking quality that hinted at AC30 territory—a very cool tonal convergence! Even with the Trenton’s volume at 10, the amp stayed relatively clean—remarkably so, given the wattage—with a subtle but very nice tube compression. Single-coil pickups were a great match for the amp—retaining clarity of tone without inducing any fizziness. Even so, notes and chords packed such a gut-punching wallop at higher volumes that, at times, the Trenton evoked the sensation of playing through a ’60s Marshall combo. I was also struck by how dynamically the amp responded to volume adjustments at the guitar, and the two 10" Webers highlighted that with their tight, clear bass response.

Cons:
Would be just about perfect with reverb and tremolo.

Predictably, humbuckers changed the character of the Trenton significantly. A ’65 Gibson SG Custom drove the amp harder, and it got very raunchy past five on the amp’s volume control. And when I flipped on the raw switch, the ValveTrain bounded for Neil Young’s Crazy Horse territory—heavy with saturation and a creamy but very musical fuzz. At lower volumes, the Trenton-and-Gibson combination yielded a warm tone that would work well for jazz, with plenty of volume to ride over a drummer with a light touch.

Testing the 6-watt mode, I was immediately impressed with its clarity. Given my preference for high headroom and clarity, I’m typically pretty unimpressed with the lower-wattage sounds from amps that allow you to decrease power. Of course, many players enjoy the capacity for low-wattage saturation that this type of feature usually affords, because it can be great for recording or apartment playing. But the Trenton’s low-wattage mode is also great if you prefer starting with a clean slate and getting your saturation with a pedal. Single-coils take on their own charm at the lower wattage setting, too. When I plugged the Jazzmaster back in and started playing my favorite Steve Cropper licks, the compression had a sound and vibe just like the Tweed Harvard tones Crop’ cooked up on countless Stax Records classics.

The Verdict
If the Trenton had reverb and tremolo, it would be in the running for the most complete modern, low-wattage class A/B amp out there. As it is, however the Trenton is still among the best-sounding amps you’ll find in this class. And if you favor high headroom above saturation at low output, the Trenton is a very attractive alternative. And at around 1,400 bucks, the handwired Trenton is one of the more competitively priced amps you’ll find in this crowded corner of the amplifier market.