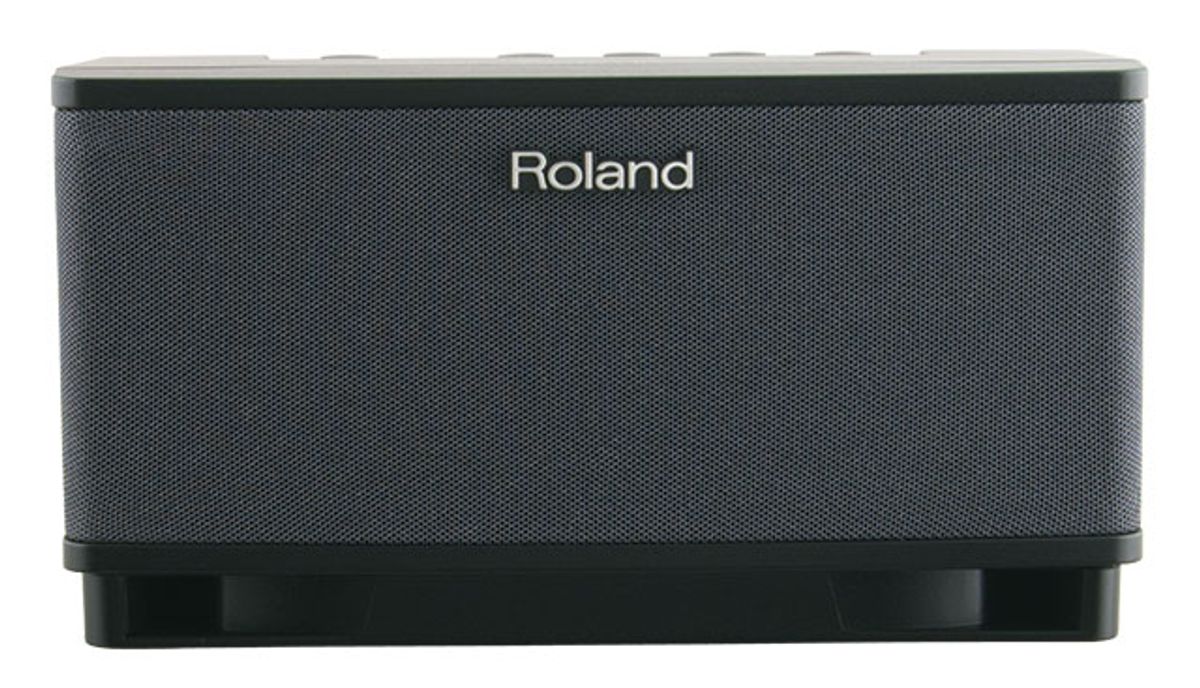 Roland leverages the power of mobile devices in an attempt to create a more perfect practice amp.

Roland has always devoted a lot of energy to developing compact and powerful instruments and tools that address the realities of modern musicians—things like smaller dwellings, expensive travel, and tight budgets. And while vintage purists who can, well, afford to be purists might scoff at some of Roland’s efforts to maximize through miniaturization, many of the company’s products built with this strategy in mind are worth their weight in gold to working musicians trying to make the most varied music they can on a budget.

Roland’s multi-effect guitar units can still surprise with their versatility and bang for the buck. But the company is less renowned as an amp builder even though their 1975 JC-120 Jazz Chorus amp gave new meaning to the word “clean” and created such a demand for its pristine, clear tone that it remains in production 35 years later.

With the Cube series of amps, which debuted in 2005, Roland combined its amp and multi-effect know-how, as well as its knack for making things highly portable. And the product line now boasts a fistful of amps for bass and guitar ranging from the handheld, low-watt Micro to the 80-watt 1x12" Cube-80XL. The most recent addition to the Cube family is the Cube Lite reviewed here. And though it’s the least amp-like Cube (and least cube-like, for that matter) it can be a surprisingly powerful asset for guitarists who make their office or living room a creative or practice space

Dapper Dude
If you’re used to Cube amps in their most common form, which is to say a kind of cross between a Jazz Chorus and a lunch pail—the Cube Lite might be a surprise. It’s shaped more like a Bose Wave Radio than a traditional guitar amp, which is little surprise given that the Cube Lite isn’t strictly a guitar amp and also doubles as a stereo system. With its cloth grille and front facing bass ports, it has the sleek appearance common to many iPod-docking stereos. If you haven’t been able to sneak a guitar amp in among the living room décor, this may be your best chance yet. And considering it comes in black, white, and red, you may even be able to match it to the couch upholstery!

The Cube Lite has two stereo speakers, as well as an integrated subwoofer. Like the Orange OPC, the Cube Lite uses a speaker configuration designed to play back full-range audio. So while the Cube Lite can add distortion and effects to your guitar tone, it can also reproduce the full range of instruments from a backing track while you practice.

The amp has a 1/4" instrument input. This input feeds the signal through the COSM-based modeling section of the Cube Lite. You get amp models—including JC clean, crunch, and extreme—and a gain knob to control the overdrive level. Bass and treble controls adjust the body and crispness of your tone, while the volume knob adjusts the overall output. The Cube Lite includes two effects, chorus and reverb, and a single knob to adjust their levels. Unfortunately, the chorus and reverb cannot be used at the same time. Roland focused on making the Cube Lite simple. The back of the unit has DC power in (unlike some of the amps in the Cube line, it cannot be powered by battery), 1/8" headphone out, 1/4" instrument in, and i-CUBE LINK input with a corresponding volume adjustment control.

The crunch model produces a chugging Marshall-like tone with a surprising, if not enormous, amount of dynamic range on top

Baby Jazz Chorus—And Other Big Tones
Though I’ve never possessed a Roland JC-120 Jazz Chorus, my college roommate owned one. I always marveled over its brilliant, fully bodied clean tone and mesmerizing built-in chorus effect. So it’s no surprise that Roland was able to achieve a very compelling Jazz Chorus-like tone in the Cube Lite. But it’s remarkable how little difficulty the Cube Lite has replicating the spaciousness of the JC-120 and the bigger amp’s full, crisp clarity.

Rolling up the drive control added a bit of compression in the low end and some dirt in the highs and mids, and adding a bit of chorus produced that signature JC-120-style doubling effect. This particular setting ended up being my favorite sound on this little amp. Even on the diminutive Cube Lite, the distinctly Roland chorus can actually sound like multiple guitars, rather than the shallow, swirling detuned sound you get with most onboard chorus effects.

The reverb does an impressive job of replicating spring-style devices—a pretty tall order on an amp this size. With my Stratocaster in hand, I added some treble to the JC clean setting, cranked the reverb, and got an impressively convincing Dick Dale-inspired surf-rock tone.

Naturally, the Cube Lite doesn’t have the brute force and dimensionality of a cranked Dual Showman bouncing sonic fireworks off the rafters of the Rendezvous Ballroom. And if there is one predictable downside to the Cube Lite—especially in this clean setting—it’s that louder volumes can generate perceptible and harsh clipping, no matter how lush the reverb sounds at low volume.

Despite those limitations, the amp modeling fun doesn’t end with clean Jazz Chorus tone. The crunch model produces a chugging Marshall-like tone with a surprising, if not enormous, amount of dynamic range on top. A Fender Stratocaster’s single-coils summoned plenty of high-end spank, and the low end had a fair bit of body and punch. Like the clean model, the crunch mode sounds great with the EQ controls at noon, and they’re powerful enough that you can actually accentuate or tame any favorable or less desirable characteristics of your instrument’s pickups.

The Stratocaster’s brighter tone found me rolling off a bit of the crunch setting’s brightness by turning down the treble control to 10 o’clock. With my Gibson SG’s humbuckers, I added a bit of treble back to get more sparkle to go along with the additional low-end punch. Another very surprising positive with this little amp is its ability to render guitar feedback from the full-range speakers. It’s not an effect a lot of players will use, and the amp can sometimes produce that nasty PA-and-mic style screeching feedback at very high gain settings. But if you’re careful you can get a nice musical feedback out of the Cube Lite.

The extreme setting is for high-gain shred and ripping solos, which may be the environment the Cube Lite is least suited for. But like the other two modes, you can get surprising, low-volume approximations of the amp types it emulates. The Stratocaster’s high end was pretty intense and required rolling off the amp’s treble knob to tame the brightness. With the SG’s humbuckers, I could more easily generate the kind of molten, face-melting distortion you’d associate with a Mesa/Boogie Dual Rectifier. For long chords, the distortion blistered and folded over itself as the notes decayed, producing a fairly complex distortion tone. And during single-note solos, the overdriven tones sang with clarity. Even chugging power chords and palm mutes maintained a dynamic punch when I caked on the gain.

Again, as good as this stuff sounds, you won’t be taking the Cube Lite to practice to go up against your bandmate’s stack. But around the office, living room, or apartment, the Cube Lite is dynamic enough for exploring the finer points of your technique.

Out and About
The only function that’s less than self-explanatory is the i-CUBE LINK. Any recent iOS device (iPad, iPhone, iPod Touch) features a 1/8" jack that enables stereo audio output as well as a mono input. These signals are transferred with a TRRS (aka 4-pole) cable, which has one more stripe on the plug than your typical headphones.

In the same manner, the i-CUBE LINK jack can send and receive sound through a single TRRS cable (which is included). The ability to have your amp and mobile device send and receive audio in real time opens up a new world of possibilities for mobile recording and practicing. If you want to record directly to your iPad and play the results back to the Cube Lite or want an app on your iPhone to process your guitar signal and play it back to the Cube Lite’s speakers, you can via the i-CUBE LINK.

Additionally, when recording to your mobile device, you can set the Cube Lite for one of two modes: line or direct. In line mode, the Cube Lite processes your guitar signal before sending it to the CUBE LINK output. Direct mode sends the dry signal to that output, allowing you to leverage any modeling software you may already have on your device.

To take advantage of the interconnectivity between the Cube Lite and your iOS device, Roland developed an intuitive, free iOS app called Cube Jam. The app allows you to import audio directly from your iTunes library. This audio is then placed on one channel of a two-channel mixer. Your incoming guitar signal is fed to the other mixer channel. From here you’re able to practice alongside a tune, adjusting the two volume levels to taste with a slider on each side. The Cube Jam makes things easier (or more challenging, if you want) by letting you adjust the playback speed of your sound file without changing its pitch. The range is from 50 to 150 percent, available in 10-percent increments.

Cube Jam also lets you transpose the pitch of the sound file without changing its speed, from -6 to +6 semitones. Once you have the desired speed and pitch, you can practice along and record your session inside Cube Jam and mix them down so you can share them with your friends.

Video integration would have been nice to see in the Cube Jam, given how often people share this type of content on YouTube. Another minor drawback is that the Cube Jam app isn’t optimized for the iPad’s larger screen, and always remains in portrait mode. Hopefully these issues will be addressed in future versions.

The Verdict
There are literally hundreds of practice amps out there on the market. But by using the expertise they’ve gained through the development of their powerful COSM modeling technology and a fairly streamlined approach to smartphone and tablet integration, Roland has developed a pretty sophisticated and simple practice-amp package in the form of the Cube Lite. The free Cube Jam app expands its ease-of-use for practice and recording. But all the iOS integration in the world would mean little if the Cube Lite didn’t sound pretty dang good, and in settings from classic Roland clean-and-chorused tones to more aggressive fare, the Cube Lite impresses at low volume. This makes the unit an ideal practice mate for players who spend a lot of time at the office or share a small living space. That combination of assets is bound to make the Cube Lite a very valuable tool indeed to many modern players facing the modern challenges of less space and less time.