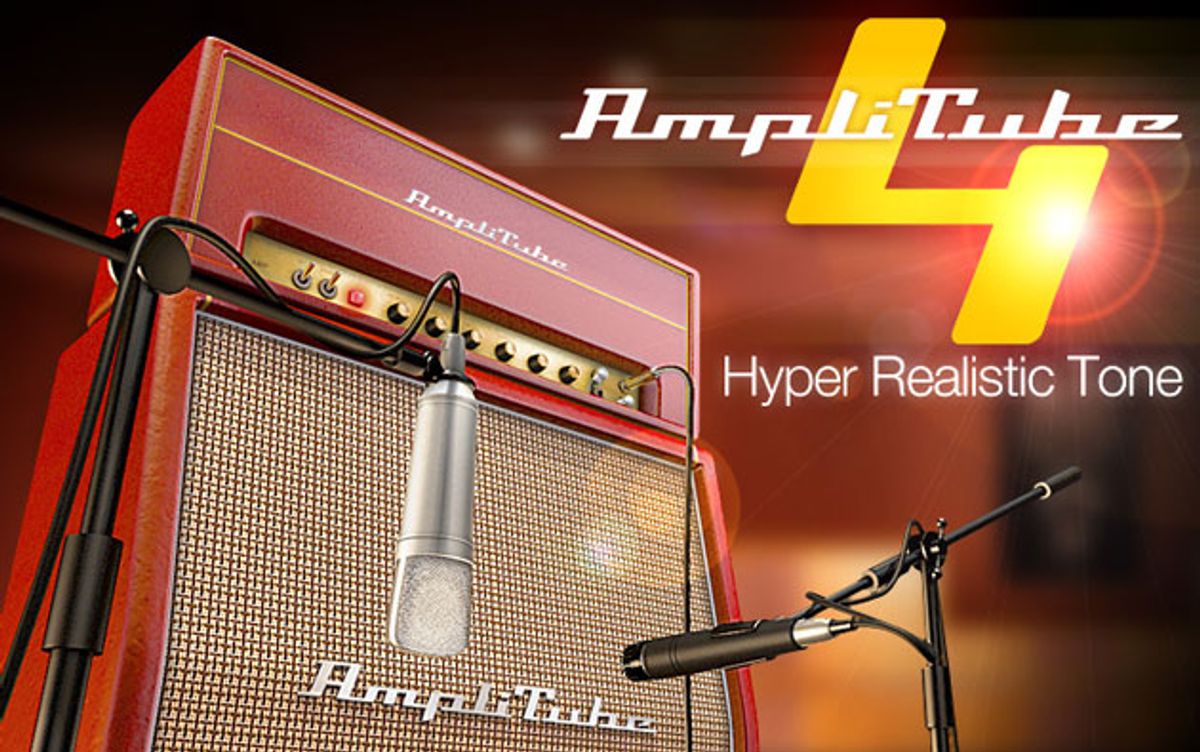 Sunrise, FL (September 15, 2015) -- IK Multimedia is proud to announce AmpliTube 4, a major upgrade of the legendary guitar & bass tone studio DAW plug-in and software for Mac/PC. The new AmpliTube offers a whole spread of fresh specs and updated gear: It now features the most advanced speaker cabinet section ever developed, new speaker modeling, 5 new British amplifiers, a new acoustic simulator pedal, an additional "effects loop" slot between the preamp and power amp sections, a built-in 8-track DAW, an ultra-precise tuner, an inspiringly intuitive looper section and a whole lot more. These new features add to the jaw-dropping inspirational depth, hyper-real performance and amazing sonic accuracy that have made AmpliTube such an essential tool in the music studios and performance rigs of guitarists, bass players and other musicians all across the world. With more realism, more gear, better sound, more flexibility, more functionality, more tone and just plain more everything than ever before, AmpliTube 4 is the most powerful version of the ultimate guitar & bass tone studio ever released.

New hyper-realistic cab room AmpliTube has always been about achieving the most realistic tone, and now that extreme commitment to accuracy is a part of its completely redesigned cabinet section. The new Cab Room feature is the most advanced cabinet section ever made, giving players a new level of customization and flexibility never before heard in software.

The cab room is a 3D speaker cabinet recording space that can be changed depending upon the desired "room" type and effect. Players can choose from a range of room types - from a cavernous "garage" to a full-on cabinet "dead" room - and mix the room effect and color into the overall sound. On top of that, the cab room now has 5 distinct customization sections: There's the cabinet selection, with size adjustment, where players can choose the speaker cabinet they'd like to match to their amplifier. There's individual speaker selection where users can swap out individual speakers. There's mic selection and placement for finding each speaker's "sweet spot". There's room selection where players select the surrounding recording environment. And there's also a mixer section that lets players mix the levels of their speaker mics, room ambience, direct amp signal and overall main mix. Never before has such a level of control and customization been available for fine-tuning tones from the speaker section.

Dual 3D mic placement Musicians can now mike their cabinets with up to two microphones in a full 3D space. With 18 highly coveted recording microphone models available in AmpliTube Custom Shop, AmpliTube 4 allows for a truly hyper-realistic recording environment. The room microphones can also be chosen from the available mics. This, coupled with its swappable speakers, allows for true cabinet miking with full speaker interaction - a digital first - making it easier to find that magic speaker "sweet spot" for an unprecedented level of tonal realism and control. Add in things like room ambience control, a new mixer for the cab section and gorgeous new graphics, and it's easy to see that the new cabinet section is poised to revolutionize the way guitarists, bass players and other musicians utilize virtual cabinets in their music.

New hyper-realistic gear AmpliTube 4 welcomes 5 new classic amplifier models to the mix that represent some of the best British tones from the 70s, 80s and 90s. Each amplifier has been modeled from scratch to embody a different aspect of powerfully classic British amplifier design: There's the Brit 8000, Brit 9000, Red Pig, Brit Silver and Brit Valve-Pre - each sports its own matching cabinet. All of these new amplifiers have been created via the same methods and technologies that have made the AmpliTube brand name synonymous with world-class sound, hyper-realistic tone and extreme accuracy. These models also bring a new level of realism and sonic accuracy through a new technology that precisely replicates the dynamic interaction between the power amp and the speakers. This finally eliminates the "harshness" found in the upper frequencies of other amp modeling software. All of this new gear is exclusively available only in AmpliTube 4.

Acoustic simulator AmpliTube 4 is all about exploring new tonal possibilities, and its new "Acoustic Sim" model pedal turns the electric guitar into a hyper-realistic acoustic. It delivers stunning realism and an amazing playing experience that can be tweaked via its intuitive onboard controls. Players can choose and blend between different 3 acoustic body styles and 3 types of top material to sound like a range of different acoustic guitars - it's yet another technology premiere from the AmpliTube team. Now AmpliTube 4 guitarists can go from shred to strum with just one click.

UltraTuner Also stock in AmpliTube 4 is an upgraded tuner section with IK's patented UltraTuner technology. With tuning accuracy to 1/100th of a cent, this technology allows for the most precise digital tuner ever made. In fact, UltraTuner is so precise that it's more accurate than mechanical strobe tuners - tuners that are widely considered to be the "gold standard" of tuning devices.

Creative connections and effects placement New to the signal path in AmpliTube 4 is an effects "loop" insert slot situated between the preamp and power amp sections that can accommodate up to 4 daisy-chained rack effects. In addition to the new effects loop, any stomp or rack effect can now be placed into any effects slot. This means that stomp boxes can be used in the post "rack" section and rack effects can be used in any stompbox slot (on any pedalboard or in the effects loop section). This opens the door even more for creative tweaking and innovative sonic sculpting possibilities.

8-Track Recorder/DAW under the hood When used in standalone mode, AmpliTube 4 now features a built-in 8-track DAW that makes recording ideas and songs a breeze. Its powerful sequencer-like waveform editing should be immediately familiar to any modern musician, making it easy for anyone to use it as a sketchpad for new ideas or as a full-featured recording solution on its own. Each track features standard treble, mid and bass EQ, pan control, level, mute, solo and record enable functions, plus there's an FX enable button that allows for the application of different tone configurations to individual tracks.

As a learning tool, players can import any audio tracks into the DAW section, define loop points and use AmpliTube's built-in speed control to slow down difficult passages without affecting pitch, and use the pitch control to change keys without affecting the speed. This feature is perfect for working out difficult solos or practicing different leads or melodies over a series of chord changes in a backing track.

A truly super looper Rounding out AmpliTube 4's new feature set is a MIDI-controllable 4-track looper. Dubbed the Super Looper, it's an intuitive and full-featured 4-track looper that musicians can use to lay down multi-part backing tracks with speed and ease, and then practice leads, chords and melodies over the top.

Infinitely expandable AmpliTube 4 comes with the built-in Custom Shop gear store feature that allows guitarists to add gear to their collections any time a-la-carte or in collections. The AmpliTube Custom Shop is the largest collection of virtual gear on the market. Its easily browsable selection of amps, stomps, cabinets and more includes officially certified models from the likes of such legendary greats as Fender, MESA/Boogie, Ampeg, Orange, Soldano, Groove Tubes, Gallien-Krueger, Jet City Amplification, THD and T-Rex, Fulltone, Z.Vex, Carvin, Morley, Wampler Pedals, Dr. Z, ENGL and more. In addition to these well-recognized brands, there's also signature gear from artists like Slash and Jimi Hendrix. AmpliTube 4 can also be expanded with legacy gear from previous versions of AmpliTube via the Custom Shop. Owners of previous versions can restore all purchases and gear with the "restore my gear" feature in the Custom Shop. All told, there's over 290 pieces of professional-grade gear now available for trial and purchase in the AmpliTube Custom Shop! Gear released before AmpliTube 4 can be purchased individually or as bundles in either currency ($ or €) or in Custom Shop Gear Credits.

Plugging in to a world of sound With IK Multimedia's range of audio interfaces, getting tone from AmpliTube is as simple as plugging into an amplifier. iRig 2, iRig HD, iRig PRO and iRig UA are IK's latest generation of interfaces that allow players to plug in and get pristine, pure sound quality from their Mac or PC (or iPhone, iPad or Android). Plus players can get the latest in wireless stomp control using iRig BlueBoard, IK's Bluetooth MIDI foot controller (for iOS and Mac).