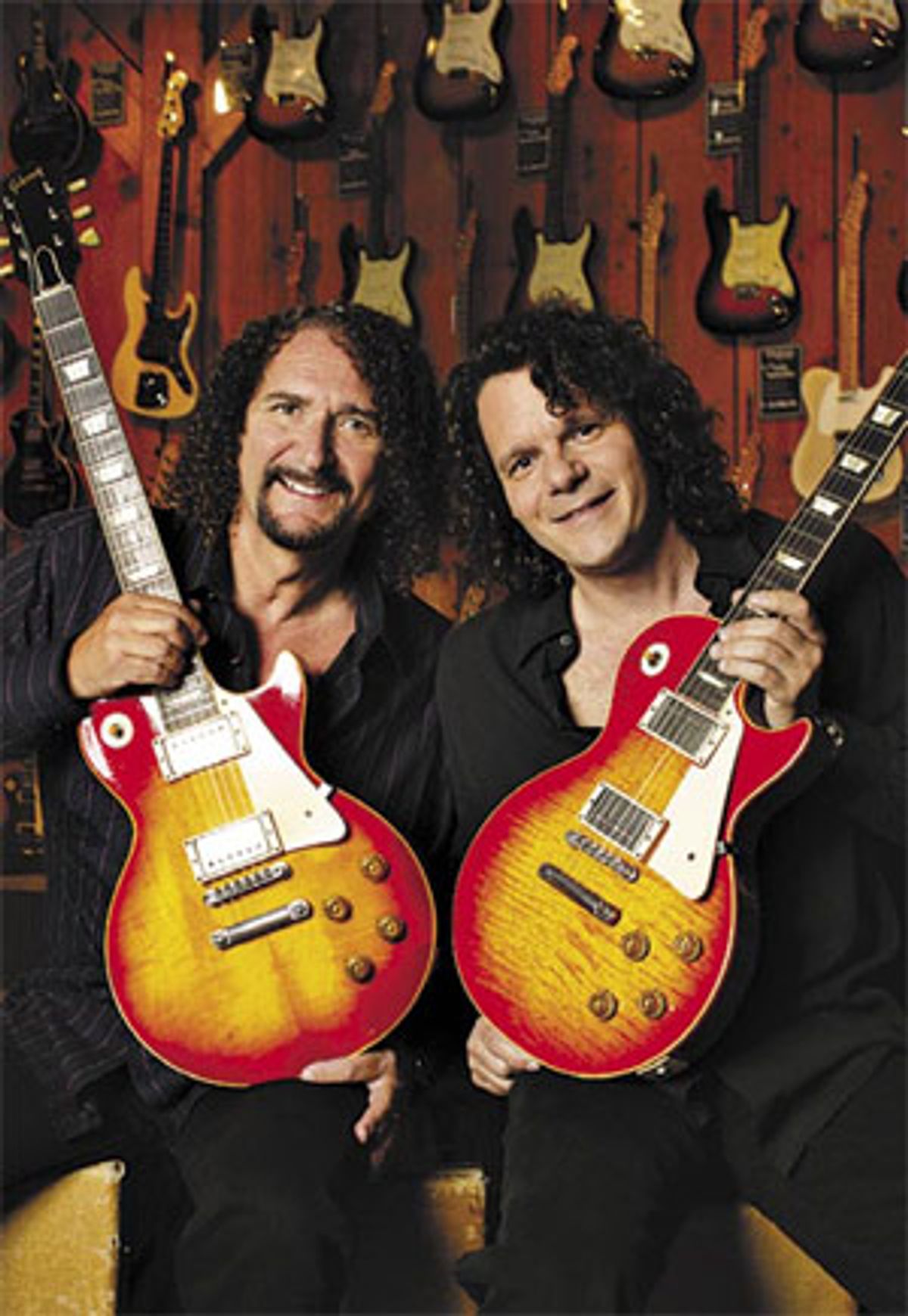 To evaluate the state of the vintage guitar market, Adam interviews the Burst Brothers, experts on the subject.

When we set out to track the peak of the vintage market in 2006 and its subsequent correction in the years since for this month’s cover story, two of the first people we called were Dave Belzer and Andrew Berlin, an enterprising pair of Southern California vintage dealers known by most of the guitar industry simply as the Burst Brothers.

Hidden behind their sunglasses and easy-going nature lie two of the sharpest minds in the vintage world, and they’ve proven a knack for making bold moves at the right times, perhaps best illustrated by orchestrating Guitar Center’s 2004 multi-million dollar acquisition of a trio of iconic guitars at auction, including Clapton’s Blackie and Cream-era 335 and SRV’s Lenny. We sat down with Belzer and Berlin in late May to get their takes on the current state of the vintage market and their predictions for the future.

Where have you seen the vintage market go in the last six months to a year?

DAVE: Within the last year, obviously with the state of the economy, it’s about where most things are at: people’s houses and most collectibles are down 20-30 percent on average.

DREW: There are not people lined up like there were to buy vintage guitars. For a while, it seemed like a lot of people were wanting to buy guitars not just to play and enjoy, but as investments. A lot of people were using their home equity to do it, and we’ve seen a lot of that slow down. However, within the last month we’ve seen it pick up – definitely within the last few weeks.

DAVE: I would say within the last two months it has started to pick up. Two months ago it was the lower end – stuff in that $500 to $3000 range – but within the last month we’ve started to really get people who are inquiring about higher-dollar items, and suddenly we’re starting to move some guitars over the $10,000, $20,000 price range. It’s the people that still have a passion and love for the instrument, and they’re not in it so much from an investment standpoint as they are for the love of the instrument. And I think people are starting to feel a little better about spending money. It’s a good time to buy. The fact that everything is down somewhat means that if you’re a buyer, it’s not a bad time to be in business.

DREW: Additionally, there’s more availability now on things that were harder to get before. Prices got so high that people figured, “it’s time to sell,” while there are other people selling because they have too much money tied up in properties, and they feel that they can still get more out of their vintage guitar than a house or something similar.

Are there any sectors of the market that were particularly hard hit by the market’s correction?

DAVE: I would say Fender across the board – bass-wise, Fenders weren’t hurt too much, but guitar-wise, everything Fender has been a little soft and slow.

DREW: You have to realize that Fender was a mass-producing company that made tens of thousands of sunburst guitars in the sixties; their goal was to get as many out into the public as possible. It took longer to carve a Gibson and to glue the neck in, and Fender was slapping the necks on and turning them out. And they’re great instruments, but I think they got a little heavy there – they needed a little correction as they started to get a little ridiculous. I think they’re adjusting now.

What about the very high end of the market – how were amazing Bursts affected, for example?

DREW: I think at this point a perfect Burst is still going for the same amount of money; there are just so few of them for sale. What we’re seeing is that there are a lot of Bursts on the market, but they are generally plain and not exciting, not flamey or they have issues. I would still think that if you found the right Burst you could get $600,000 for it if it was flamey and in perfect condition – there are still guys who would be willing to spend the right amount of money for the right instrument. The ones that have gone down in value are the ones that are not that exciting or have issues.

As we move towards vintage shows like Arlington, which are really considered barometers of the market, what are you keeping an eye out for?

DAVE: You’re hoping to see the public bring some instruments out for sale. I’m hoping that dealers become a little more realistic to what pricing is today – it seems that you’re still going to guitar shows and seeing the same price on instruments that was there two years ago at the height of the market. I haven’t quite seen that adjustment yet. Also, I’m expecting to see less high-end stuff, because the high-end is so soft right now that dealers aren’t even bringing that stuff to shows right now. We’re all trying to buy that lower end stuff.

Is this a buyer’s market for the players who have been sitting on the sidelines, or do you believe that people should wait longer, that there’s more to fall?

DAVE: My recommendation would be that yes, if you have the money, this is a buyer’s market, especially for Fender stuff. It’s a good time to buy; try to buy the best, cleanest, original piece you can.

DREW: There are still pieces that I don’t think have completely matured in terms of being collectible, that haven’t been completely collected up where you can’t buy any more of them and the price gets higher. I won’t say exactly what all of those pieces are [laughs], but there are still some pieces that you can buy that are a good value in terms of how they will appreciate, because there just weren’t that many made, and people are starting to become hip to them.

A good example would be amps. Amps have been doing very well, and we’re selling a lot of amps, especially smaller amps. The appreciation for amps is growing and it’s one of those markets that we’re doing very well in.

As older vintage pieces become rarer, does that mean some of the newer pieces from the ‘70s and ‘80s are going to see a corresponding rise in value?

DREW: Guitars from the ‘70s were not considered vintage when I was doing shows in the early and mid-‘80s. If you had ‘70s guitars in your booth, that was kind of a no-no. You weren’t taken seriously if a [Fender] guitar had three bolts in those days. Now we can’t find enough good early ‘70s stuff to keep in stock. There’s a very big market for those guitars that’s growing.

I don’t know if it’s going to bleed over into the ‘80s – I don’t think so [laughs], just because there’s gotta be some cutoff there. In my opinion, some ‘70s Strats were decent, but they weren’t of the quality that four-bolts from the ‘50s and ‘60s were; yet, to some musicians, that era in the ‘70s was my ‘50s, and so they still see them as vintage instruments.

DAVE: Believe or not, there is a little buzz about ‘80s Fender reissue stuff right now. The early Tele reissues, the ‘57 Strat reissues – they’ve really jumped in price within the last year and there’s a lot of desirability. ‘80s Gibson dot 335 reissues also seem to be hot. That stuff falls into a certain price point, and they’re good, quality instruments.

DREW: The early ‘70s dot necks were made by the archtop luthiers that were making Gibson’s archtops in the ‘50s and ‘60s; if you can get one of these, they can make for a great workhorse, and you won’t have to spend $20,000 on a vintage 335.

DREW: It’s hard for us to predict – I never thought they’d be close to what they are. In this business and doing it for so long, I never thought I’d see a burst hit over $100,000, or over $500,000. But I would assume that vintage is what’s hip for young people to use, and even if vintage for them is seventies, it’s still vintage. There are a lot of good guitars being made now by Gibson, Martin and Fender, but there’s something about the mystique of the vintage piece – its sex appeal, what it does, the mojo, the inspiration that you get from a piece that’s been around for years and continues to get better and better. I seriously doubt that that feeling you get from picking up a really cool, old piece made in the ‘50s or ‘60s will go away.

DREW: I do want to say that some of the people that Dave and I have built collections for throughout the years, there have unfortunately been a couple of people that needed to sell their instruments because they came up against hard times, but generally, I think that people appreciate that they took the chance 10, 15 years ago when these prices were way lower, but were very high prices at the time. They bought instruments thinking they were paying a lot, and a lot of those people are just really grateful now because the money they allocated for those instruments they would have just played the stock market with. A lot of people have called us and thanked us for recommending vintage guitars – they still have them, they still love them, and they’re still incredibly valuable.