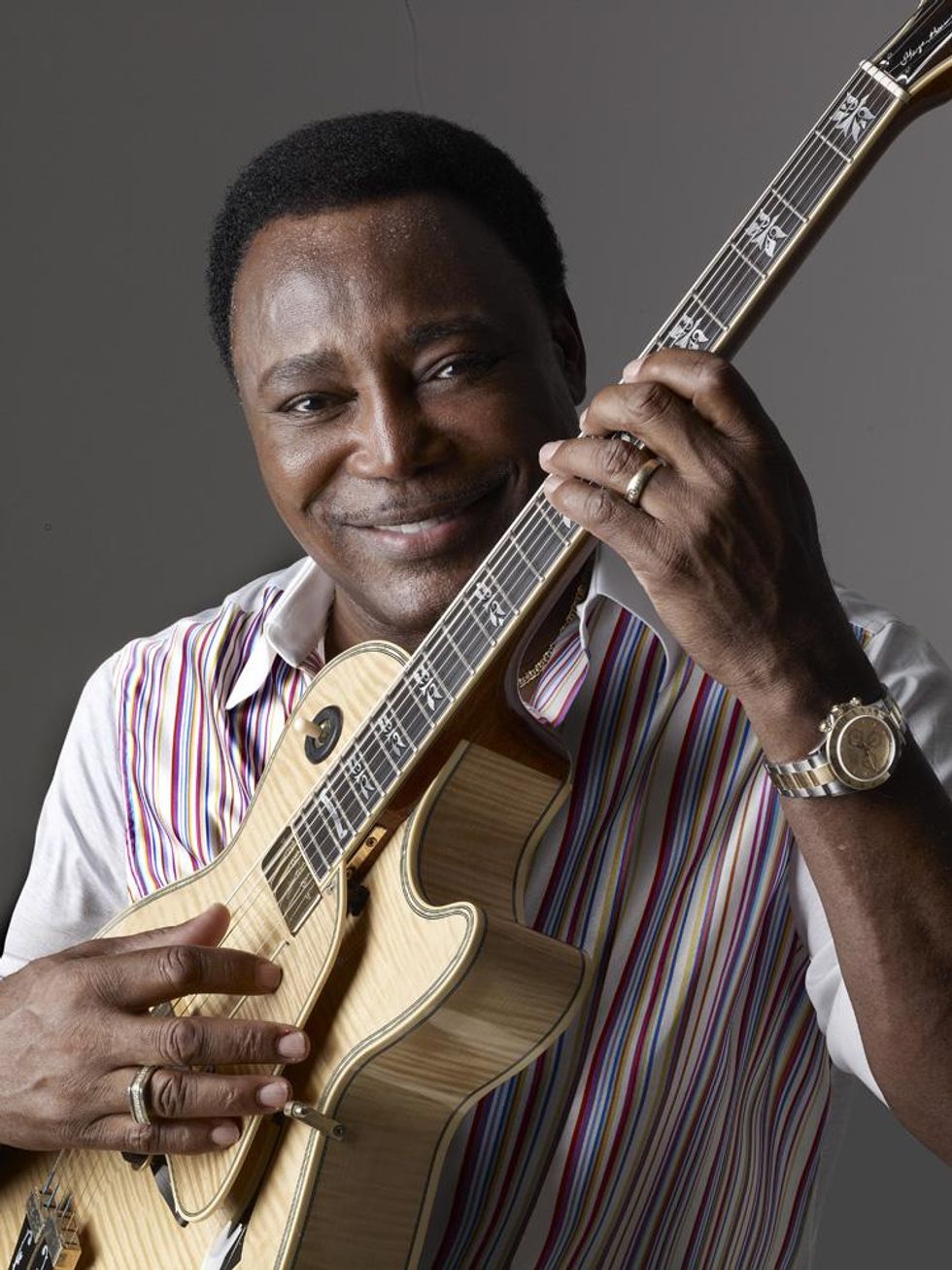 A foray into the fretboard wizardry of one of the greatest of all time.

• Unleash the power of the superimposed arpeggio.
• Organize advanced language in a guitar-friendly way.
• Create excitement and forward motion in your solos.

George Benson is a jack-of-all-trades in the music world. He's known by many as a talented R&B singer and he's floored listeners with his melodic guitar-driven smooth jazz instrumentals, but to me (and my fellow jazz guitar nerds), Benson has all of the qualities that make him one of the greatest straight-ahead jazz guitarists of all time.

He is fiercely swinging, has a fluid command of the jazz/blues language, and possesses some of the fastest fingers in the business.

Influenced by instrumentalists such as Grant Green, Wes Montgomery, and Charlie Parker, Benson has a very deep bag of bebop licks and tricks. This style of jazz improv is notoriously hard to approach on guitar, but Benson's virtuosity lies in the way that he's reworked key elements of the jazz idiom to fit the nature of the guitar. Dense chromatic lines, chordal soloing, and blazing triplets sound and feel as natural as an A minor pentatonic scale using his intuitive ways of organizing the fretboard.

Ex. 1 is an excerpt from one of my favorite Benson solos, "I'll Drink to That," a blues in F off of organist Jimmy Smith's classic 1982 release Off the Top. Benson blazes through some otherworldly double-time ideas that almost knocked me out of my chair when I first heard them. This lick is textbook Benson: a muscular barrage of 16th-notes packed with superimposed arpeggios, sinewy chromaticism, and a punchy minor pentatonic idea to bring things back home.

The first measure of this lick is straight bebop, with Benson making extended use of the Dm7b5 (D–F–Ab–C) and Abmaj7 (Ab–C–Eb–G) arpeggios on a Bb7 chord. Superimposed arpeggios are often used to emphasize different colors on a chord or tonality, but in this instance, Benson uses it to generate forward linear motion and get from one area of the fretboard to the next.

Benson also utilizes a delayed melodic resolution in the first measure of Ex. 1, landing on a B natural directly on beat two, but immediately resolving it to a Bb by way of a chromatic enclosure. Delayed melodic resolution is a hallmark of the bebop idiom, having been pioneered by Charlie Parker and Bud Powell. The chromaticism in this idea also happens to be symmetrical, with the interval of a minor third anchoring the outside note to the key. Oftentimes without a common interval linking chromaticism together, it can sound random or unorganized. Guitarists like Benson and Pat Martino have employed this symmetrical chromaticism to great lengths, as it not only sounds great, but it feels great and lays out nicely on the fretboard.

Ex. 2 gives you an idea of the possibilities of the superimposed arpeggio over a Bb7, and also happens to be similar to a lick that Benson plays in a variety of contexts. The concept is to move through different arpeggios over a given chord and connect to the various arpeggios using scales and chromaticism. In this lick, we're using the arpeggios Abmaj7, Dm7b5, and Fm7 (F–Ab–C–Eb) over a Bb7. The superimposed arpeggios also give you an idea of what other harmonies you can use this lick over: Bb7, Dm7b5, Fm7, and Bb7 are all interchangeable.

The picking directions for Ex. 2 will also include some insight into how Benson groups lines on the fretboard to work in favor of his right hand. A lot of times, he'll begin each string with a downstroke and end each string with an upstroke, a system that a lot of speedy pickers have favored. But when playing arpeggios like we see in this example, Benson will utilize short downward sweeps to execute them confidently and not run into any right-hand "hiccups."

I think that one of the coolest things about Benson's original lick is how he slips into a greasy minor pentatonic run in the second measure. This is a masterful display of bridging the gap between bebop and blues: two styles that are like bread and butter in the hands of a masterful jazz guitarist.

Ex. 4 shows another way of injecting blues into your bebop playing (or vice-versa). This time we start with an F blues scale run, which seamlessly transitions into a more bebop-oriented idea with chromatic approaches targeting Bb7 chord tones. The logic that ties these two worlds together is melodic voice leading. This essentially means that we're looking for areas where we can connect the two ideas (the blues scale and bebop derived ideas) using the least motion possible. To accomplish this type of voice leading, it's important to understand the shared notes between sets of scales, arpeggios, chords—whatever it is you're trying to voice lead between.

This next example is one of my favorite ways that Benson commandeered a concept that is not typically guitar-friendly: soloing with chords (Ex. 5). Chord soloing, especially at any tempo faster than a ballad, is usually best left to the pianists. The nature of the guitar makes it very difficult to shift around different chord shapes quickly, but Benson remedies this by moving around the same chord shape quickly. By taking a stack of fourths (or a quartal voicing) and using it to harmonize a blues scale melody, Benson creates forward motion and excitement. It's important to note that the only consistent notes from the blues scale are the top notes of each voicing, the bottom and middle notes are usually non-diatonic.

Ex. 6 will give you an idea of how you can extend this quartal idea to include more chromaticism. Getting accustomed to using ideas like this on a blues will train your ears to hear bluesy key-center based chordal lines on standards, which provides a nice contrast to strictly playing the changes.

In jazz and blues playing, the notes are only half the battle. Playing along to recordings of guitarists like Benson, Wes, and Grant Green will show you how to swing and phrase in a way that's informed by the tradition.

For more great straight-ahead Benson, I'd recommend checking out the albums It's Uptown, Giblet Gravy, Big Boss Band, and my personal favorite, Cookbook. Finally, listen to hear the natural progression of the jazz guitar vocabulary in Benson's behemoth of a solo on the tune "Ready and Able."

From Your Site Articles
Related Articles Around the Web
george benson