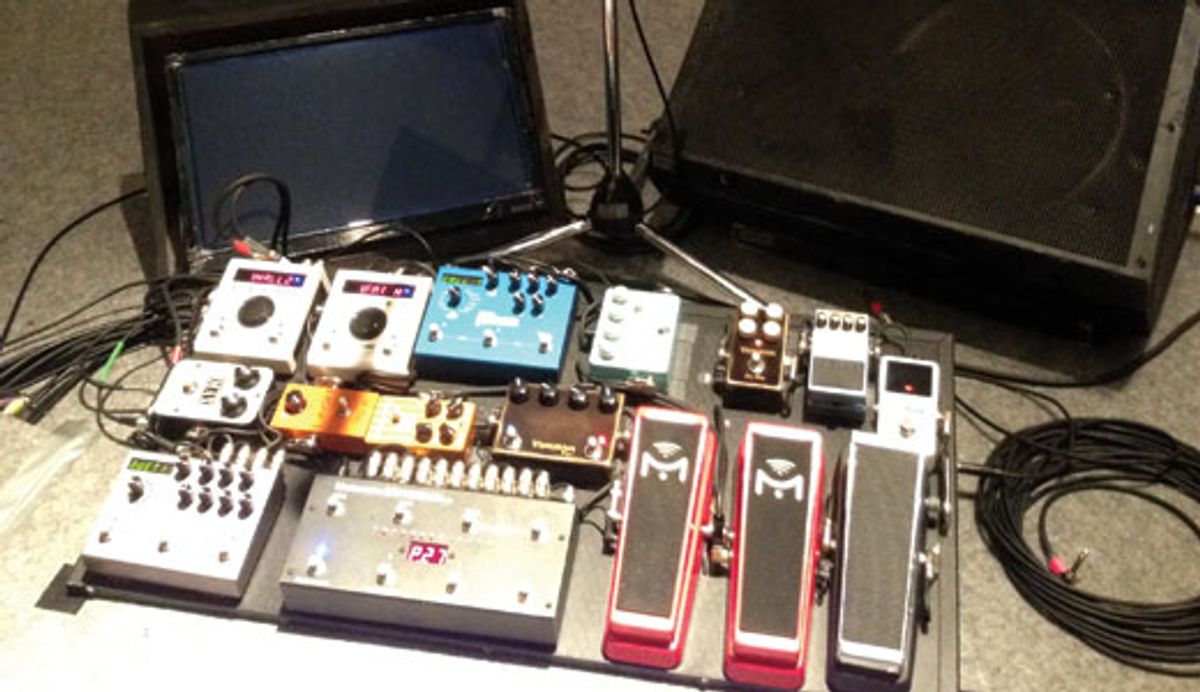 This is my position onstage for the Tsuyoshi Nagabuchi tour, showing my wedge and the ramp with wedges surrounding it. Every day I run out there at soundcheck to make sure I hear enough drums and guitar over the din of the PA.

In-ears or wedges? Here’s how to get the best from both onstage.

I'm often asked about my thoughts on stage monitoring. With the advent of in-ear monitors, it's now common to see stages devoid of any “side fills" and/or wedge (or “foldback") monitors. On many tours—and certainly in bars and casinos—it's become fairly common to see stages with no guitar or bass amps either. Yet some artists, such as Paul McCartney and Gov't Mule, prefer to do things old school with traditional monitors. Let's look at the pros and cons of both in-ear systems and traditional monitors.

Let's just get this out of the way: In the early days of rock 'n' roll shows, there were no monitors! Early rockers heard their instruments through guitar and bass amps. Vocals and drums were heard through the main PA system. As rock's popularity exploded, crowds grew larger, girls screamed louder, and it became impossible for both musicians and audiences to hear the music.

The first use of foldback monitors may have been when the Beatles performed at Atlanta Stadium in 1965. A local soundman, “Duke" Mewborn of Baker Audio, set up a monitoring system that so impressed the Fab Four, they asked him to go on the road with them. (He declined.) Until then, feedback concerns had largely prevented soundmen from facing monitor systems back towards the band and their microphones. Mr. Mewborn used cardioid mics (which reject sound from the back and the sides) to limit feedback. So began the age of foldback monitors.

And so it was—until the '80s, when the first in-ear systems were developed. These are basically headphones—each musician gets a personal mix, much like in a recording studio.

I've used both in-ears and wedges extensively over the last 25 or so years. I've learned that both approaches have advantages and disadvantages, and I might prefer wedges for one situation and in-ears for another. Sometimes, when starting a tour, I'm given a choice, though sometimes there's no option—you must use the system the tour has decided on.

Working with In-Ears
Let's look at in-ears first. On the plus side, custom-molded in-ears act like earplugs, protecting your hearing (as long as you're careful with levels—more on this later). You get a mix, and it stays consistent no matter where you stand onstage. This makes in-ears a great choice if you move around onstage. If your band is touring with its own monitor console, you can also expect consistency, and you shouldn't need to make many changes from show to show. In-ears isolate you somewhat from the varied acoustical environments you encounter in different rooms.

I remember touring with Chris Cornell in 2009, opening for Lenny Kravitz for three weeks in France. For various reasons we weren't able to do a full soundcheck until two weeks into the tour. But because we carried our own digital console and mics, the sound from gig to gig was basically identical to what we'd experienced in rehearsals. Likewise, when we'd perform at big festivals with multiple bands—often “throw and go" situations where soundchecks aren't an option—we could expect our familiar mix when we hit the stage. This would be next to impossible using traditional wedges. Also, singing is much easier with in-ears. Most musicians don't push their voices as hard and sing in tune better with in-ears.

In-ear monitors can be frustrating for guitarists. Most in-ears isolate you almost completely from ambient stage sound, but we're used to hearing our amps onstage.


On the downside, in-ears can be frustrating for guitarists. Most in-ears isolate you almost completely from ambient stage sound, but we're used to hearing our amps onstage. With in-ears you're almost completely reliant on the monitor engineer, and hearing your close-miked amp is not the same experience as hearing it on a wide-open stage. Also, a consistent mix can actually be a disadvantage at times. Have you ever walked toward the drummer during a song so you could hear a bit more hi-hat and a bit less of yourself? This “self mixing" is impossible with in-ears. Also, in-ears isolate you from the crowd and the other musicians, which can make it difficult to talk to your bandmates mid-performance and leave you feeling disconnected from the live experience.

To be happy using in-ears, you need to spend time dialing in a mix—winging it is a bad idea! Working with an experienced monitor engineer is obviously a huge plus. Knowledge of good amp- miking technique is helpful. If possible, set time aside to work with your monitor and FOH engineers. Experiment with a few different mics on your amp in various positions until you get the desired sound in your in-ears (assuming it also works in the PA). Cabinet simulators, such as the Two Notes Torpedo C.A.B., can also be terrific for keeping your in-ear mix consistent from show to show. Using a stereo rig to add a touch of ambience (delay, reverb, or a bit of both) can also make the in-ear experience more natural and enjoyable.

Lastly, be very careful about levels. Using a limiter on your in-ear mix is recommended. (Most in-ear receiver packs have them built-in.) I have tinnitus in my left ear mainly because of repeatedly setting my in-ear level too loud on a past tour.

Working with Foldback Monitors
Using good ol' wedges is actually my preference. The pluses are many: Setup and soundcheck are usually easier. You have less gear to deal with personally, so you can concentrate on playing more. You can hear your amp naturally. You can communicate with the other musicians onstage. And you'll hear the crowd, which tends to make the whole experience more exciting and enjoyable. On the downside, they obviously create more stage volume, which can conflict with the main front-of-house mix. Also, if you move around onstage a lot, it can take a bit of soundchecking to make sure you hear yourself everywhere.

On my current tour with Tsuyoshi Nagabuchi, we have a large ramp that extends off the front of the stage. When I'm all the way at the end, I'm actually in front of the main PA. The sound is quite delayed coming out of the PA, so I have to make sure the wedges all the way down the ramp have plenty of drums and guitars so I can play in time.

Try to keep the stage volume as low as possible. I recommend learning some EQ basics so you can listen to your wedge at soundcheck, identify issues, and ask for changes in the master EQ if necessary. Generally, cutting frequencies is better than boosting. This contributes to a better- sounding stage. It's great if you can listen to your monitor and say, for example, “Can you cut 400 Hz on the whole mix a bit to clean it up?" Your monitor engineer will appreciate your knowledge, and the FOH engineer will appreciate you keeping things under control onstage.

Both approaches are valid, and if you maintain a flexible attitude, you can make either approach work. Until next month, happy monitoring!