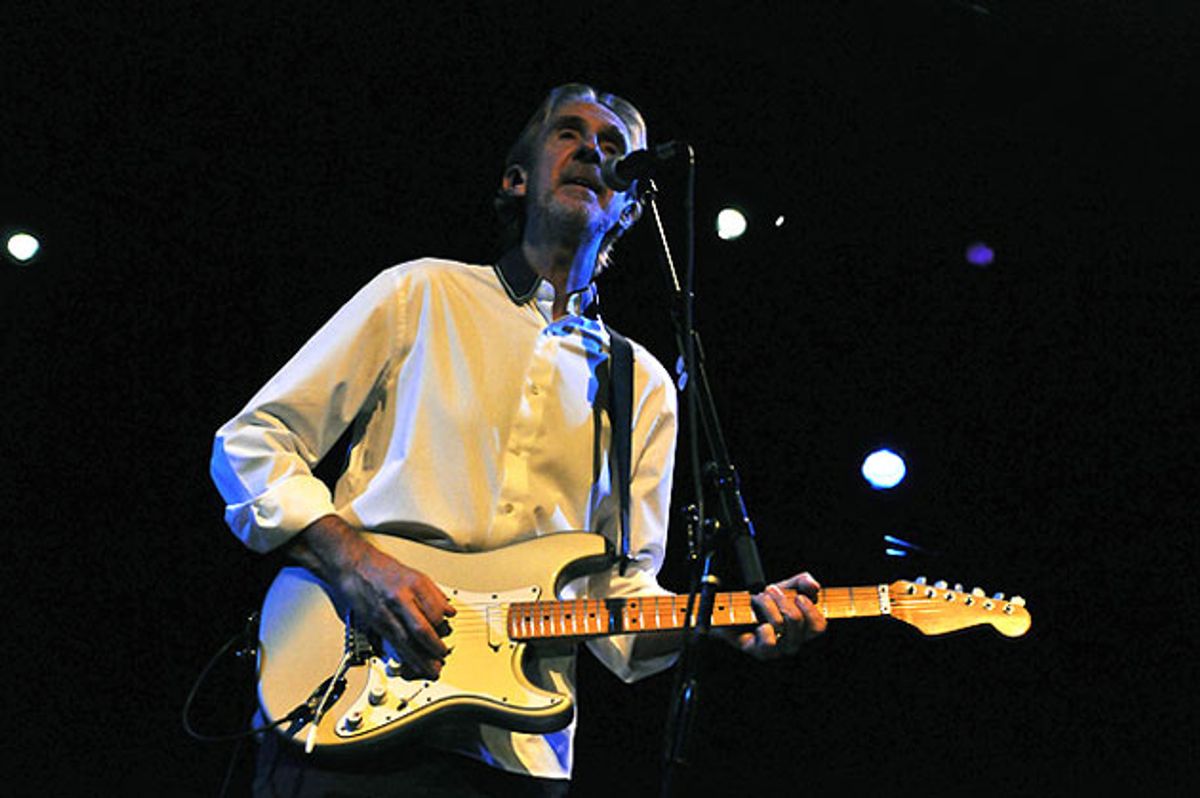 Genesis’ original guitarist marks the 25th anniversary of his other band’s greatest hit.

Guitarist/bassist Mike Rutherford was a founding member of Genesis, a band that’s sold 130 million albums over the course of a career spanning nearly half a century. But for some Rutherford fans, that accomplishment is rivaled by the legacy of “The Living Years,” a 1988 song by Rutherford’s side project Mike + the Mechanics. It was a tearjerker mega-hit, a father/son song sad enough to turn a stone-cold bastard into a sobbing mess.

Sacrilege? Not exactly. “The original was a classic,” says Rutherford. “You can’t ever do a better version, but you can try to honor the occasion with something a little bit different.”

“I went into a guitar shop with my 12-string Rick and my Rickenbacker bass and said, ‘Can you cut that one and that one and join them up?’”

It’s been a busy couple of years for Rutherford. Genesis recently released R-Kive, a companion to the BBC documentary Genesis: Together and Apart. The three-CD set is a retrospective of the band’s hits along with highlight from the solo careers of sometime band members Rutherford, Phil Collins, Peter Gabriel, Steve Hackett, and Tony Banks.

Premier Guitar spoke with Rutherford just before the start of the first North American Mike + the Mechanics tour in decades.

What inspired the Living Years memoirs?
I found my father’s unpublished memoirs about his life in the Royal Navy. It was very well written, and I had a fascination for years about the generational change from my father’s era. England was an old-fashioned country with empire days, and our parents came out of two world wars. Then we appeared with our long hair, guitars, music, and probably even drugs—it was a huge left turn. Until the ’60s, young men wanted to become their fathers. From the ‘60s on, they wanted to become anything but their fathers.

The book’s release coincides with the release of Living Years 25th Anniversary Deluxe Edition.
When you get to my age and the length of my career, everything you do is a celebration of how many years it was!

Beyond the South African choir and Andrew Roachford’s vocals, did you also re-record the actual tracks?
Yeah. There’s no point doing it like the original version—it has to be different, and it is. The original version was one of those songs where everything came together and kind of worked. This one is less rhythmic and has a different feel.

Which version do you prefer?
Well, the original. It’s a classic. You can’t ever beat that. I mean, the new one’s got a great vocal beat. It’s something different, you know? But you can’t beat the original.

When Mike + the Mechanics returned in 2010, you introduced a new lineup. How different is it working with vocalists Andrew Roachford and Tim Howar, as opposed to the late Paul Young and Paul Carrack?
Funny enough, not that different. The Mechanics stopped in the early 2000s, though we didn’t really announce it. We had one more album in the pipeline, but it didn’t really feel that great. We felt like it was an end of an era. Then around ’08, I had some songs and I thought, “These sound like Mechanics songs. Let’s go back to how the first album happened. Let’s write some songs, record them, and find someone to sing them.” I knew Andrew, and I knew the Mechanics needed to have an R&B voice and a rock voice—two lead singers are always a big plus. So Andrew came down, and it took off.

Some fans might have expected new material for this album and tour.
There was a new album in 2010 called The Road, which is quite good actually. It’s funny though—it’s like I now know who the band is. We’ve done quite a few shows over the last three years. I’ve got a bunch of new songs that we’re working on. Once you know who the band is, you can write more for the voices.

The first of Rutherford’s 12-string/bass doublenecks was simply two Rickenbackers grafted together. But for Genesis's The Lamb Lies Down on Broadway tour, he used the instrument seen here: a Rick 12-string paired with a 6-string Microfrets bass. Photo by Frank White Agency.

You’ve used many tunings in the past. You were also instrumental in the design of the Steinberger M series. Was the Steinberger TransTrem [a tremolo system that allowed for quick, capo-like key changes] part of the toolbox you used for the alternate tunings?
The crazy tunings were done before the Steinberger, and all through Genesis I played with my 6th string tuned down to D. But now that I’m doing more lead, I’m using normal tuning. Occasionally I forget which tuning I’m in.

What is your main axe now?
I have the EC model [Fender Eric Clapton Strat]. The Strat is the easiest sort of workhorse version there is. Funny enough, you mentioned Steinberger. The original small model was so crude, with the graphite body, and the wooden ones never quite did it for me. I’d asked if they could build me one and they said, “No, we don’t do that,” so I did it myself. I’m working on a new thing now where I’ve got my old small one out, and I have some very lightweight wood that will just be attached in a couple of places with rubber washers, but the extra wood won’t even touch the guitar. Basically, I’m a big, tall guy, and those guitars felt so small. Their sound is quite special, but I want a guitar with a bigger feel. We’ll see. I like doing weird stuff with guitars.

Are you still using the bass/12-string doubleneck?
Not on this tour, no, though I brought it out on the last Genesis tour in 2007.

You’ve had many versions of that instrument.
There have been about four versions. For the first version I went into a guitar shop with my 12-string Rick and my Rickenbacker bass and said, “Can you cut that one and that one and join them up?” The guitar maker [Dick Knight] said, “You’re not serious, are you?” He wouldn’t do it at first, but I said, “Someone’s going to do it, so why don’t you do it?” Later I got the Shergold. For the last tour I had a Gibson 12-string and a Yamaha bass.

And you mated them?
Yeah. Once again, “Cut that one here and that one there.” One thing with all doublenecks is, the balance is rubbish. The neck is going to fall down.

It’s heavy, too.
Yeah—tell me about it.

What is your main amp?
The key thing in my rig is an old Fender [Hot Rod] DeVille 4x10. I’m running the guitar and pedals into it. I sometimes run them in stereo, with one amp being the straight sound and the other having delay only.

What about for your bass and the bass pedals?
For bass, I’ve gone back to Ampeg, the old one with the 4x10. My guitar tech has also done AC/DC’s Malcolm Young for years. He keeps some of the gear, and I just borrowed it one day. The thing about the Ampeg is, no matter where it’s set, I’ve got a sound. The settings could be all wrong, and it still sounds the same! The bass pedals go through it, too.

A live clip of Mike + the Mechanics’ hit “The Living Years” with original vocalist Paul Carrack. Mike Rutherford’s subtle, single-note part enhances the song without calling attention to itself.

Back in the day you used Echoplexes. What do you use now for delay?
When I write, my guitar goes into Pro Tools, and I use EchoBoy [a SoundToys plug-in].

How about live?
For years I used a Lexicon delay. But I’m trying to avoid having too much in racks. I want things to be smaller and simpler. What’s weird is that sometimes the older, cheaper effects sound better. I tend to use Boss pedals.

People always ask about a Genesis reunion. Are you sick of that question?
Of course they ask about it. We had a bit of action last year. We did a documentary for BBC over here, and for Showtime in America. It’s a nice story. Most people don’t quite know who did what. People ask, “Was Peter Gabriel in the band? Did Phil Collins play drums? Are you in Mike + the Mechanics?” There are no others plans at the moment. But I always say, “Who knows what project is around the corner?”