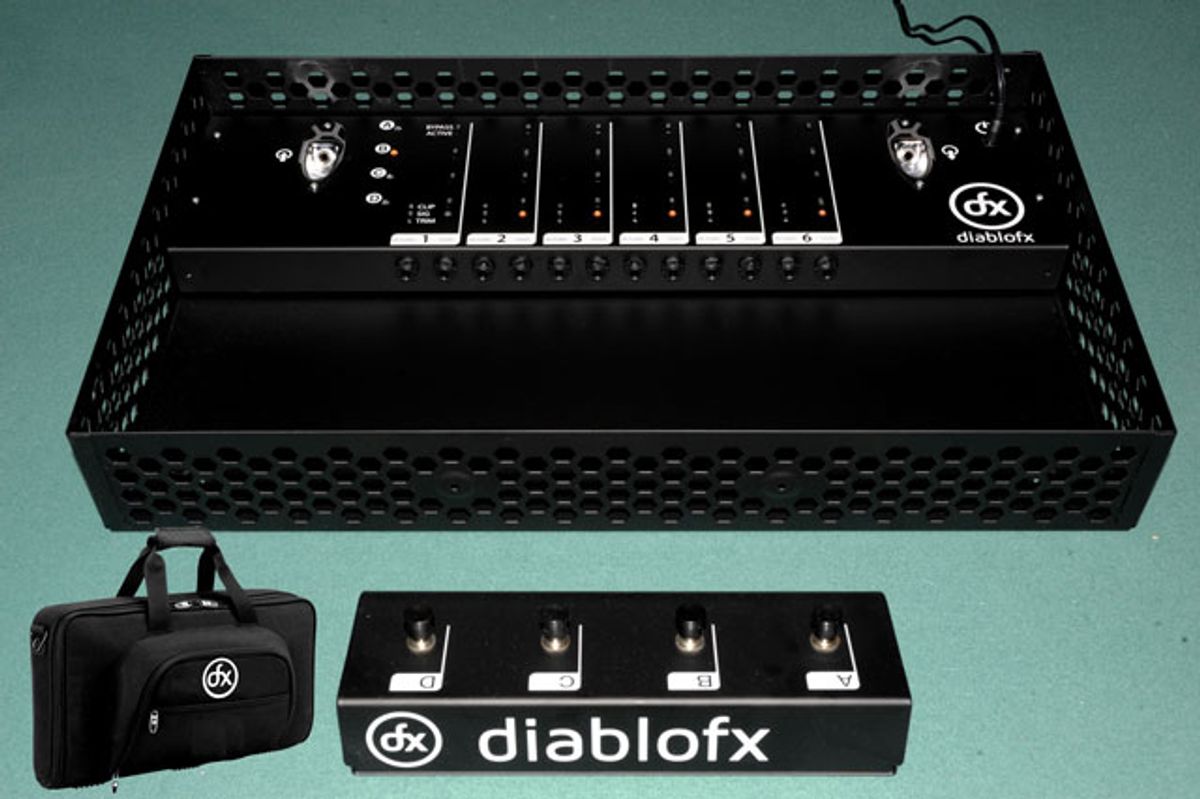 The Sound Control system is the first wireless all-in-one effects pedal management system which enables guitar players to turn on and off multiple analog or digital effects in one stomp.

Concord, CA (January 11, 2013) – Diablo FX, a new player in the guitar market, introduces a truly innovative solution for effects pedal players: Sound Control 6. The Sound Control system is the first wireless all-in-one effects pedal management system which enables guitar players to turn on and off multiple analog or digital effects in one stomp. Sound Control 6 is unique because of its wireless design, which means no cords and power strips at the front of the stage or in the way at practice.

Everyone who uses pedals when performing experiences the same dilemma: set-up and break-down takes forever, power cords clutter up the stage and the performers had better be very practiced and skilled to stomp on the right pedal, or combination of pedals, at the right time. Joseph Lockyer, co-founder of Diablo FX, was no stranger to these challenges, and, playing more and bigger gigs, he really needed a simpler solution. At that point, he and Rick Schwab invented a new wireless pedal, the first of its kind: Sound Control 6, to be introduced to the world for the first time at NAMM 2013.

“I will never go back to pushing pedals again, because Sound Control 6 makes everything so easy. My set-up takes me about seven minutes now: take out my amps, plug in, take out my wireless pedal and put it on stage, and I’ll go have a beer while the rest of the guys are still setting up,” Lockyer says with a grin and adds “At the end of the night, I pick up my pedal, throw it in the bag, close my box up and I’m done.”

Not only is set-up easy, playing with Sound Control 6 makes your performance simpler and better. It is hard to turn a number of pedals on and off at the same time, within half a second. Even the most practiced players easily miss pedals again and again. Sound Control 6 can be placed anywhere on stage and it allows to control up to six effects pedals or effects loops. Simply select the pedals you want to be “on” for up to four different channels. Now, you can turn on or off up to six pedals on each channel with one button push. Listening to all the changes that happen with just one button click is amazing: turning on the EQ, adding analog delay, a little reverb – players appreciate the huge benefit to be able to do all those things without having to perform the usual “tap dance”.

When a pedal is not in use, Sound Control 6 bypasses it altogether. When using stomp boxes, the audio signal is degraded traveling through various pedals in line, regardless whether they are turned on or off. With Sound Control 6, however, a pedal that is not in use, will be physically bypassed, so the audio signal is not going through that pedal at all. This allows for minimal signal disruption. Another factor is the length of cable run across the stage. With regular stomp boxes, the signal has to travel through 75 feet of cord or more. Sound Control 6 only requires a couple of feet of cable to be connected, further decreasing loss of fidelity.

Sound Control 6 allows for great versatility. “You can use it for up to six effects on each of the four channels, or as an amp switching device or use it as an effects loop for a digital processor. You can do so many things with it, it’s crazy” says Lockyer.