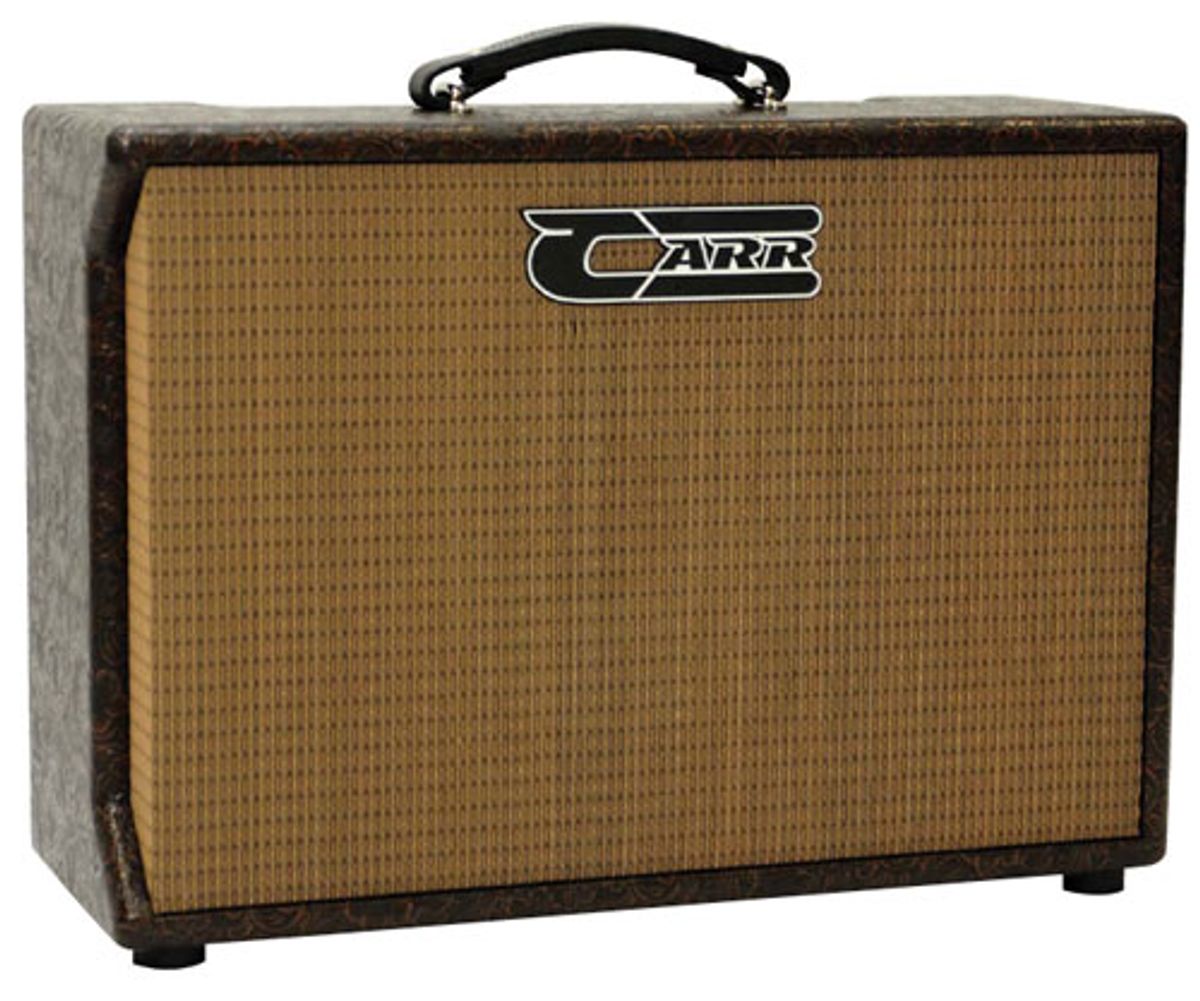 The newest offering from Steve Carr and his North Carolina-based Carr Amplifiers company is the Artemus—a 30-watt beastie that dishes Steve’s take on classic Vox AC-type tone. But, as with most Carr amps, it does that and more. It’s available as a 1x12, 2x12, or 1x15 combo, and as a head. But before I get deeper than that, let me start with a bit of disclosure: I own two Carr amps—a Rambler and a Mercury—and I love them. I am not an endorser, though. Just a customer. And if I thought this amp stunk, I would feel it my duty to tell you.

What’s Under the Hood
Carr prides itself on boutique quality, inside and out. As for the inside, the Artemus runs four EL84 tubes for power, two 12AX7s in the preamp, and a 5AR4/GZ34 rectifier tube. The controls are straight ahead: Volume, Treble, and Bass knobs, as well as three toggles. Edge switches between a mid and top boost. Mid toggles between British and American voices. And Watts switches between 15- or 30-watt operation. I’m sad to say that Carr chose not to include reverb, because they do the best reverb I’ve heard on a tube amp.

On the outside, the Artemus comes in a variety of amp coverings. Our sample has a sort of cowboy-belt, tooled-leather look that I seem to find myself coveting. The amp handle is the most honkin’, heavy-duty leather monster I’ve ever seen. As with most Carr amps, it has a dovetailed, solid pine cab. I think pine cabs are just more musical for guitar amps than other materials. I can’t prove that, but I feel it in my guts when I play.

“Made in the USA” used to mean the best quality money could buy. While those days are largely gone, there are still some shining examples, and Carr amps are one of them. Carr uses old-fashioned, point-to-point handwiring. I won’t go through and list all the parts they use, you can read about it on their website. But here’s just a couple of “for instances” for you. The power cord is long enough for most gigs. The internal wiring is done with Canare shielded cable, which is also heavy-duty and very quiet. Suffice it to say that they use very high-quality stuff and they don’t cut corners. You want to talk about roadworthy? You are talking Carr Amps.

Tone Available Here
OK, this amp is pretty interesting. While I’m not sure I would go as far as saying it can sound like two totally different amps, the Edge and Mid switches yield a nice variety of sounds and a bit of a change in how the amp responds. Carr was going for a Vox deal here, and I think they hit the mark very well. You can get that “top-boost” tone easily with the Edge switch set to Bright, so Beatles chime can be yours. Now what I really dig is the way the amp breaks up as you crank it. Through good design or voodoo or however they did it, this amp has a wonderful, vocal singing quality when cranked. It just has a silky-smooth quality that is very pleasant. Turn down the guitar volume and it cleans right up. The articulation is big and clear. Notes pop out. This amp would work well for the John Scofield funky vibe—and so much more. It has a very in-your- face immediacy. Think the beginning of the Stones’ “Can’t You Hear Me Knockin’.”

As I played the Artemus more, the sound I heard the most was Rory Gallagher’s. It just does that dead on. Looking it up, I found that Rory actually played Vox amps quite a bit. (How about that, my ears still kinda work!) So this amp has enough oomph for your Strat—many lower-powered amps just don’t. Low output pickups just cannot deliver sometimes when you have an amp that’s under 50 watts. As for humbuckers— badda-boom—this amp is dripping with rock ’n’ roll. When I was just wanking some chords out I kept thinking “I am Keith Richards.”

The Final Mojo
We live in the age of the boutique amp, and I think most boutique amps are pretty good. It’s more a question of finding what works for you and your sound. Carr makes top-quality stuff. Their amps are way roadworthy and are built like tanks. That said, the Artemus offers a particular flavor—it is not a Swiss Army knife-type amp. It won’t suit every need and, as I said, I really wish they had included their wonderful reverb because I am a reverb junkie. But if you want quality, Vox-like tone, this amp will rock you. It’s not for metalheads. It’s more suited to blues and roots folks, and for them it should be able to do any club gig with style. So scamper down to your nearest Carr dealer and have a listen.

Buy if...
you want a smoking-hot Vox sound.
Skip if...
you need mega overdrive or reverb.
Rating...