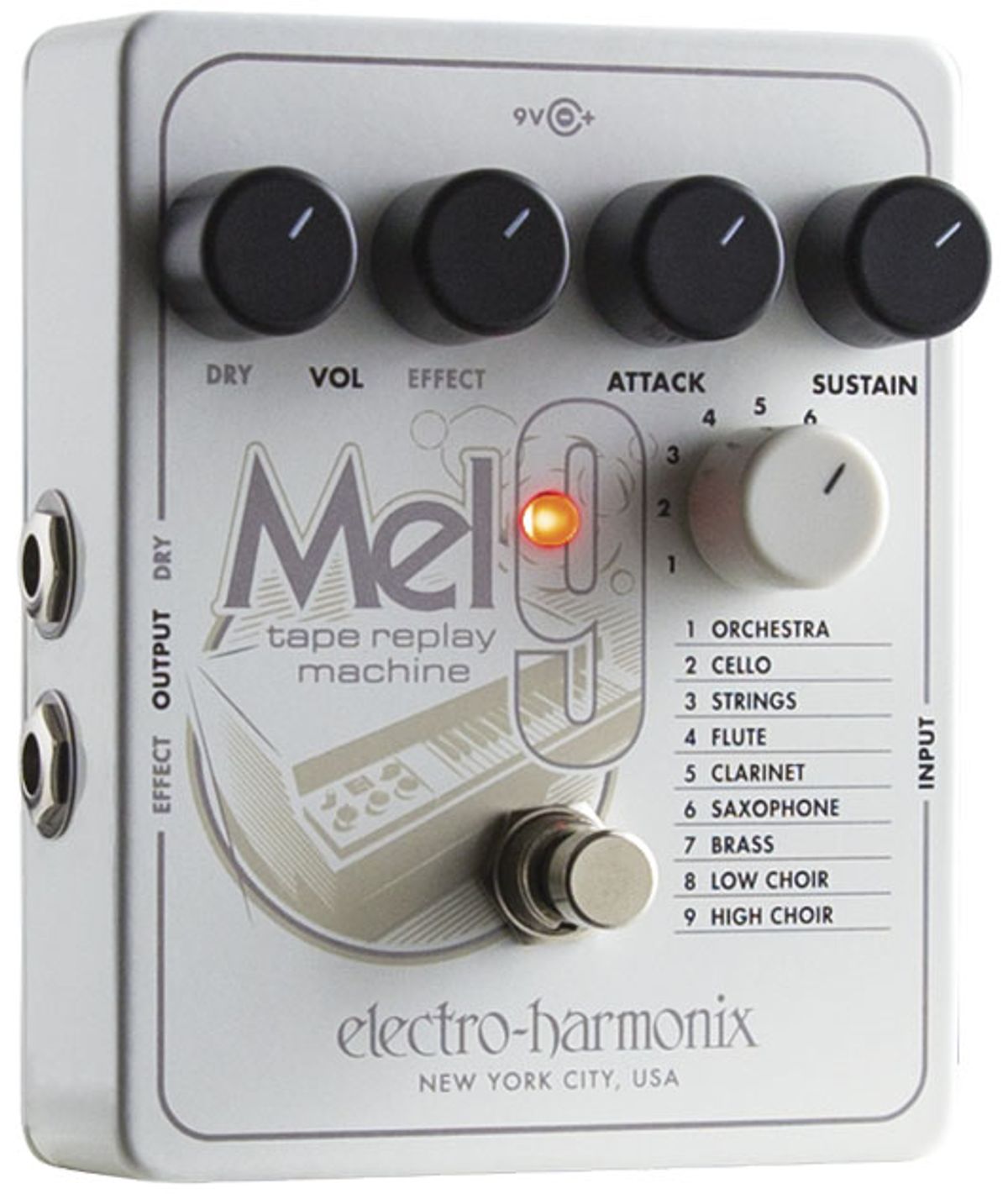 Coax trippy Mellotron tones from your 6-string or bass!

Developed in 1963, the Mellotron polyphonic keyboard used keyboard-activated magnetic tapes to, in effect, sample other instruments. This quirky, primitive hybrid of sampler and synthesizer became a staple of ’67–’68-era Beatles tracks (most notably, “Strawberry Fields”) and bands like the Moody Blues and King Crimson. Electro-Harmonix’s Mel9, a multi-voiced effects box and part of their “keyboard” family of stomps, is an attempt to capture the sounds and feel of the Mellotron in a guitar pedal.
Mel9 tracks pitch bends without sounding glitchy or collapsing into a crumble of digital artifacts.

Strings and Things
The Mel9 has ninevoicings available at the twist of a rotary knob: orchestra, cello, strings, flute, clarinet, saxophone, brass, low choir, and high choir. Rather than use a single mix knob, Mel9 blends dry and effected output via separate effects and dry knobs. The attack parameter alters how quickly the effect responds to your picking/strumming (you could also think of it as the rate of “swell”). The sustain knob increases the length of the effected note as you turn it counterclockwise. There are also two outputs for dry and effected signals. The Mel9 draws 100 mA and ships with its own 9V power supply, though you can use most center-pin negative adaptors. There is no battery option.

You’re the Conductor
Bringing the Mel9 to a studio can be a dangerous proposition if you’re crunched for time. It’s addictive, invites experimentation, and there are scads of sonic possibilities to explore. I spent, quite literally, hours with the Mel9 and a looper. In the orchestral setting, big chunky chords morph into a full-fledged symphony—an especially nice sound with a volume pedal and a little delay. Looping a chord change in orchestral setting and switching the Mel9 to, say, the flute voice for a melody line, creates the audio picture of a minor symphonic composition. Changing between voicings requires some practice and familiarization because attack and sustain settings will vary from voice to voice and is impacted by your style and choice of guitar. For example, a little extra sustain helps the single-coils of a Stratocaster maintain a melody line sailing over a looped bed from the orchestra setting. Dial it in too low, though, and the effect will fade out quickly.

Unlike some digital synthesizing effects, the Mel9 tracks pitch bends without sounding glitchy or collapsing into a crumble of artifacts. In fact, after spending considerable time jamming and recording with the Mel9, my only complaint is the lack of a tone knob. The output is generally usable and pleasing to the ear. But I stumbled on many potential applications where I wanted to blend the effect more subtly—and within a narrower EQ range—in the mix. Turning down the tone on your guitar helps somewhat, but a little tone shaping power in the form of a bass and treble cut and boost would make the Mel9 nearly perfect.

The Verdict
The Mel9 handles chords or single notes without a hitch, and works well with a keyboard or bass. Splitting the chain between the dry and effected output adds a cool layer of extra control and enables fine tuning the tones of the Mel9 for balance and EQ at a mixing desk or between two amplifiers. That said, it would be great to have a little more tone-sculpting power within the pedal itself. Save for that omission, the Mel9 is an outstanding pedal that delivers pretty convincing Mellotron sounds—a proposition that might have seemed like a tall order without MIDI not so long ago. The $220 price tag is a tad high, but if you spend a lot of your playing time seeking non-guitar textures to enhance songs and expand your tone palette, it may well be worth every penny.