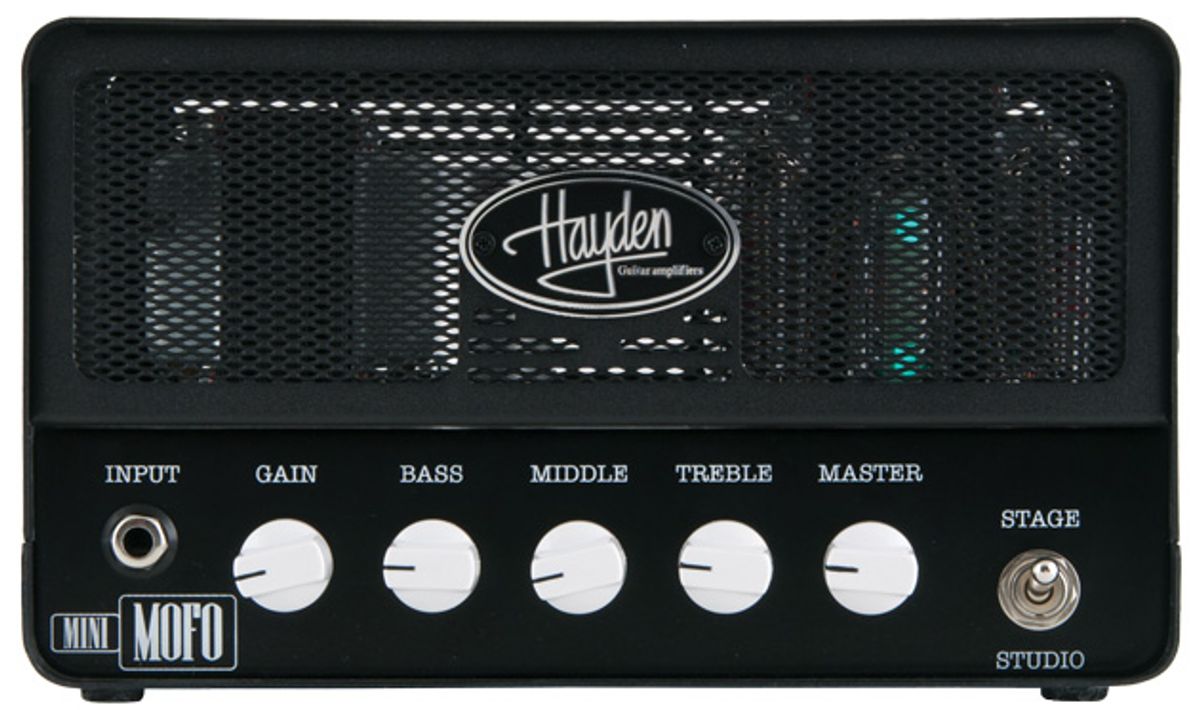 Hayden is a relatively new name in amplifier circles. The company was formed in 2006 in the UK as a guitar-centric sister company to Ashdown, a brand known for their bass amps.

Hayden didn’t fool around when it came to developing their new line. They recruited Matamp’s chief engineer Dave Green to design their amps and developed two main product lines—a handwired series made in England and a more affordable line of PCB construction amps made in China. This year, Hayden retooled and restyled their amp lineup, including our review amp, the Mini MoFo 15, a lunchbox-sized head equipped with two EL84 power tubes and one ECC83 preamp tube.

Son of a Mother
While its biggest sibling, the MoFo 100, offers features like channel switching, reverb, an effects loop, and a recording out, the Mini MoFo 15 takes a bare-bones approach. The 15’s front panel consists of controls for gain, EQ (bass, middle, and treble), and master volume. The two “frills” are the studio/stage switch, which engages either 2-watt (studio) or 15-watt (stage) operation, and the EM84 Magic Eye tube—a neon-green light that’s visible through the amp’s vents—that flickers in response to pick attack.

Portable, Packs a Punch
Apart from the impressively large sounds, portability is the main attraction of the Mini MoFo 15. It comes with a padded carry case that has a zippered pouch for the power cord and looks similar to an SLR camera case. One minor complaint I have with the case design is that it’s tricky to get the amp out. There’s no handle on top of the amp, so to extract the unit, I had to wedge my hand in the bag and pull the amp out while simultaneously tugging on the underside of the bag. It’s a minor gripe, perhaps, but the process seems bound to wear out the bag prematurely.

I had a rehearsal booked in New York City, so I popped two pedals—an Xotic SL Drive and a Boss RV-3—into my gig bag pouch. With just those pedals, my guitar, accessories, and the Mini MoFo 15, I set out determined to get the biggest tone I could out of one of the smallest and easiest-to-carry rigs I can imagine. The Mini MoFo’s portability proved invaluable before I played a note, because the closest parking spot was about 12 blocks away from the studio. I plugged the Mini MoFo 15 into a no-name cheapo cab, and thought that if the Mini MoFo 15 can sound good through subpar speakers, it could probably handle any backline situation.

Depending on how I had my guitar volume knob set, I could move from gnarly, Brit-rock vibes to a John Scofield-like,
semi-dirty lead sound.

For the first half of our rehearsal, it was just the drummer and me. With the EQ controls and gain all at noon, volume at 9:30, and mode set to stage, I enjoyed the roar I got from the Mini MoFo so much that I played on without changing a setting for 20 minutes. Even with a limited set of controls, there are a wide variety of sounds on tap. And depending on how I had my guitar volume knob set, I could move from gnarly, Brit-rock vibes to a John Scofield-like, semi-dirty lead sound.

When the rest of the band arrived (another guitarist and a very loud bass player), I feared the Mini MoFo 15 would be in trouble. My fears were soon assuaged when the other guitarist, playing through a Marshall JCM900, asked me to turn down twice.

Taming the Filthy Animal
In situations where you want the sound of a dirty amp, the Mini MoFo has plenty of horsepower for most live situations. Predictably, it’s harder to get a truly clean sound. But the little Hayden is not entirely without headroom. Turning down the gain and cranking the volume still leaves the amp a little too gritty for jazz or pristine chord work, but for music that can use a bit of bite on strummed open chords, it sounds rich and fat.

Cons:
Could use a handle on top.

Cranking the gain left me very impressed. I was able to get a great hard rock sound with a crisp, defined crunch for rhythm and ample sustain for leads. The Mini MoFo might not be the highest-gain amp around, but except for raging metal, it will hold its own for most hard rock.

Studio mode cuts the power significantly. But I couldn’t resist the temptation to see how the amp in 2-watt mode would fare in this band situation. I cranked the volume with the gain close to noon, and though the output wasn’t quite as authoritative as what I heard in stage mode, I remained audible in the band mix.

Sans Effect Reverb is a bit of a crutch for me, and I like amp reverb because it means one less pedal to bring. But the Mini MoFo sounds so beefy and vibrant that I didn’t feel too exposed without it. And though I engaged the drive and reverb pedals I brought to rehearsal, I ended up using them sparingly. And the best tones I got that day were from the Mini MoFo alone—power tubes cooking.

The Verdict
Lunchbox amps are a common sight these days. But even given this tough competition, when you shop for a mini tube head, you should include the Mini MoFo in any comparison. If you need a great sounding, simple amp in a super-compact package, the Mini MoFo is a bonafide giant killer. And for players who tend toward rocking, it might just stand tallest among its fellow tiny overachievers.