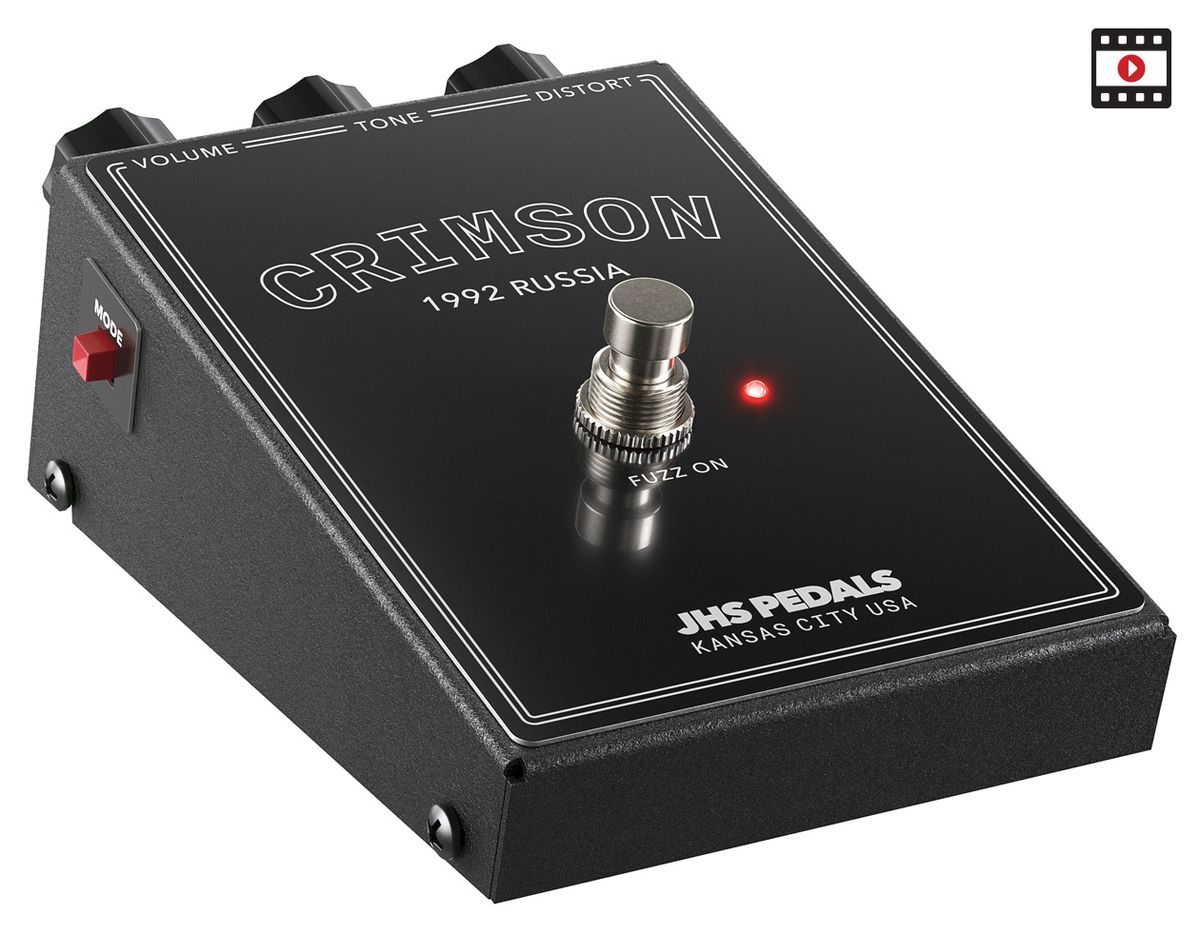 In my life, the ecstasy of ripping through a Sovtek Big Muff often felt like the most important thing in the universe. It was liberating and cathartic. Stooges and Sabbath riffs, quasi-Gilmourisms, even shards of Davey Allen all flowed easily from the fountain of Sovtek. It changed the way I related to electric guitar.

These days, my Sovtek only comes out for special occasions. But I know the sound—that growling, funky, ferocious, filthy sound—in my bones. And it took just a minute of listening to JHS’s newest Sovtek Muff homage, the Crimson, to hear how deftly they captured that outsized sound and spirit.

Sovtek cultists will point out that the Crimson is inspired not by a Big Muff, but a Mike Mathews Sovtek Red Army Overdrive. Saner heads will remind those lunatics that the Red Army Overdrive is a Big Muff in everything but name. Though there are small differences between some component values in the Red Army Overdrive and the “Civil War” Big Muff that followed, the circuit and sounds are near twins. And like those pedals, the Crimson neatly sums qualities that make all Russian Big Muffs—from the Civil War to tall and bubble-font green editions—some of the sickest, smoothest, and meanest fuzz pedals ever built. If you’re looking for a portal into that sound world, it’s hard to imagine a better point from which to plunge.

Red Means Go
Like the rest of JHS’s Legends of Fuzz series, Crimson comes in a 5.68" long, 3.62" wide, wedge-shaped enclosure that clearly nods at the Shin-ei FY-2 Companion Fuzz. Hardcore space obsessives will likely lament these still sizable dimensions. But it looks awesome, and, like its Sovtek forebears, it’s an inviting target.

There’s not much to learn from lifting the hood on the Crimson. (I don’t say this figuratively: You can actually undo the two lower screws and open it up like a clamshell.) The circuit is inverted, so you can’t see the components. But the Crimson looks well put together on the interior, with chassis mounted jacks and I/Os and a 9V battery clip. The I/O jacks and 9V DC jack are situated low on the crown of the pedal. The three knobs for output volume, tone, and gain are also situated on the crown of the pedal—looking like three top-hatted gents in a theatre box.

The Crimson possesses many unique attributes that align with Red Army Overdrive legend and differentiate it from other Russian Muff types.

The controls have great feel and resistance, and operating them from that orientation is a tactile joy. But there are few visual cues to indicate the level of a given control, which definitely makes adjustments a listening exercise. There is also a side-mounted push button that shifts the circuit’s fundamental voice into a louder more mid-forward character. It’s useful for making the Crimson more prominent in a bass-heavy mix, though not the source of my favorite tones.

Do the St. Petersburg Stomp
Broadly speaking, the Crimson encapsulates the most famous virtues of the Sovtek Muffs. The output is heavy and detailed in the low-mids, which pairs with white-hot top-end to create growling composite sounds for chords and vocal, sustained lead tones. There’s plenty of gain in the tank and the bass is fat and thumping. Still, the Crimson possesses many unique attributes that align with Red Army Overdrive legend and differentiate it from other Russian Muff types.

I used an old bubble-font green Sovtek as comparison. And though the two pedals sounded more alike than different, there are perceptible divergences in tone and feel. In power-chord settings, the Crimson sounds a bit more stitched together and compressed—succinct, punchy, and perfect for fast riffs—than the bubble-font Big Muff, which may sound a little more rabid and scooped. It is also tighter and more focused in the high-mid range—even without the midrange boost. Lead lines reveal the Crimson’s knack for feeling controlled without subtracting aggression.

The Verdict
Furious, fun, and pretty fairly priced, the Crimson is superbly representative of the Russian Big Muff family—and intriguingly different. Most noticeably, it possesses a smoothness that gives you the fire of a Big Muff with a touch of extra civility and control. It’s the ideal gateway Muff.