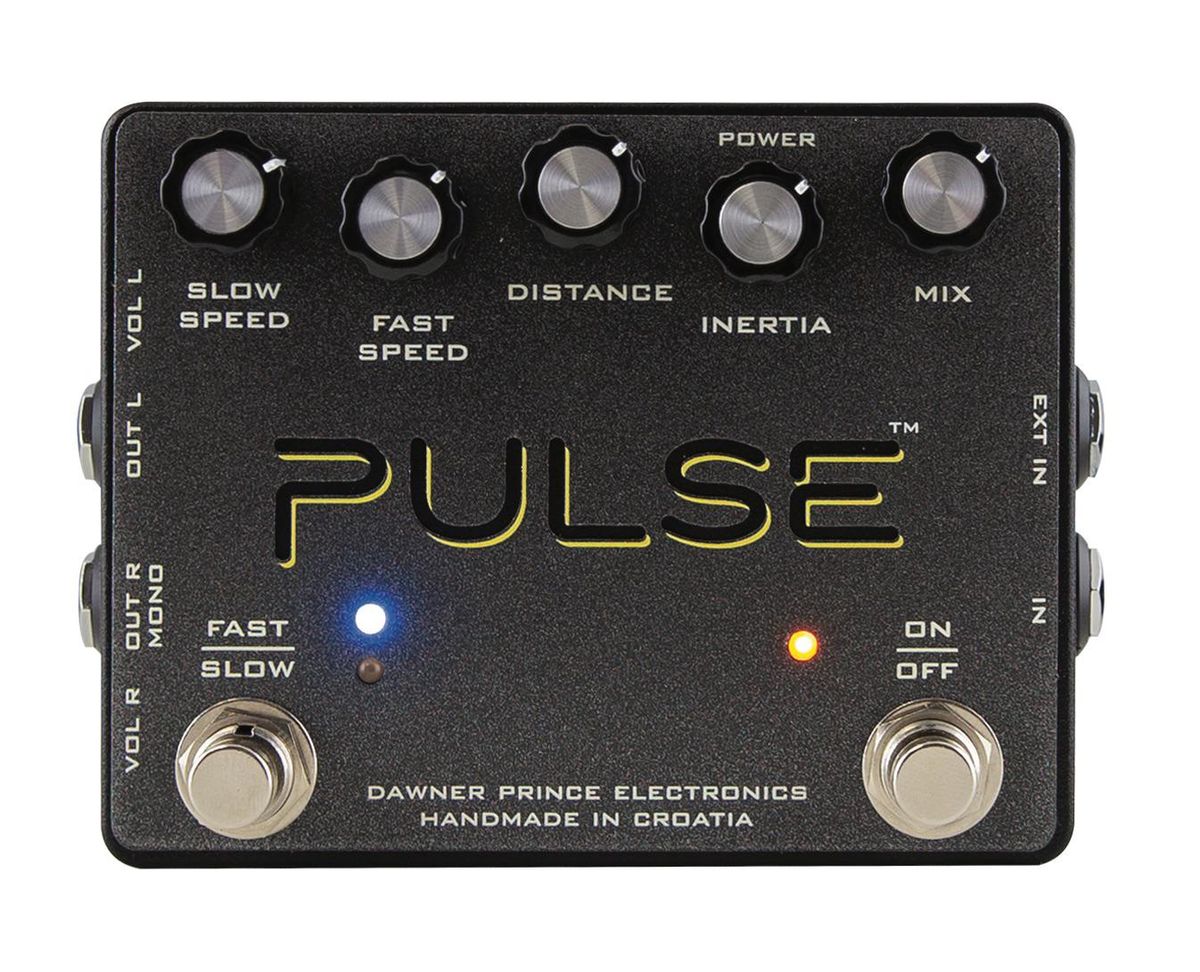 Deep, thick, luxurious rotary simulations—particularly in stereo. Super intuitive and easy to use.

Side mounted output gain pots are useful but awkward to access.

When you think about David Gilmour's guitar sounds, you tend to think of big Hiwatts, creamy Big Muff or blazing Fuzz Face tones, and Echorec delays bouncing infinitely off the columns of Roman amphitheaters.

But modulation has always been an equally foundational part of Gilmour's outsized sound picture. And while he's probably most famously associated with the Electro-Harmonix Electric Mistress when it comes to signal wobbling, he has embraced rotary speakers regularly since 1969. For much of his career, Gilmour used Leslie 147s or Yamaha RA-200s in this role. But at some point, he started to work with the Maestro Rover—an unusual stand-mounted rotating speaker that his technicians would use as inspiration for his more powerful, custom Doppola units. By the mid '90s—a period that looms large for Gilmour tone hounds of a certain breed—the Maestro and Doppolas were elemental parts of his sound.

If the name wasn't hint enough, Dawner Prince's Pulse pays homage to this sound in a loving and well-executed way. But even if you aren't out to replicate Gilmour modulation textures from The Division Bell and Pulse, this Croatian company's exceptional rotary simulator is a fine way to introduce the immersive, extra-liquid textures of a rotary speaker to your signal chain without hauling a cumbersome antique and its own team of mechanical medics.

With five staggered knobs, two footswitches, stereo outs and an expression input, the Pulse looks more complex than it is. In reality, it's very intuitive to use. And even superficially esoteric controls like the distance knob (which shifts the proximity of the virtual "mic" picking up the rotary speaker signal) and the inertia knob (which regulates the rate of the virtual speaker's acceleration or deceleration) have a very organic, natural feel and are simple to add and modify to taste. The more straightforward controls are satisfying to use, too. The slow and fast speed controls have great range (the modulation rate spans .4 to 8 virtual speaker rotations per second). You can toggle between fast and slow rates using the fast-slow footswitch and you don't have to worry about "progamming" a fast or slow preset—the switch simply ramps up or down (at a rate prescribed by the inertia control) between whatever speeds you've set on the respective knobs.

Dawner Prince also accounted for the possibility of perceived volume loss at some of the most intense modulation levels by mounting small gain pots adjacent to each output jack. You need a small flathead screwdriver to adjust them. Obviously, top-mounted knobs would be user friendly, but I was generally pleased with the output level at maximum modulation intensity. And on the whole, I'd venture that Dawner Prince made a smart compromise between cluttering the main control panel and concealing these pots inside the enclosure.

If you had to briefly characterize what sets the Pulse apart from lesser rotary simulators, it would be the deep and real sense of motion that pedal communicates. This quality is especially apparent if you take time to set it up for stereo output, which I did through two amplifiers as well as a DAW.

The Pulse's output very effectively replicates the complex interactions between fundamentals and overtones that occur when moving air and speakers are added to a tone equation.

These highly kinetic qualities don't just come from bouncy stereo pictures, however. Even in mono, the Pulse's output very effectively replicates the complex interactions between fundamentals and overtones that occur when moving air and speakers are added to a tone equation. At the right settings, you can almost see and feel the rise, dissipation, and passing of sound as bodies and particles (entirely without pharmaceutical assistance, I might add). It's a very visceral way to experience a guitar sound, and it comes pretty close to the thrill of parking your head right by a rotary speaker in motion.

The harmonic complexities and kinetic sensations generated by the Pulse are best enjoyed, at least to my ear, at slower settings where it's easier to perceive the bloom of these sounds. And even though the Pulse's fast modulation settings generate very rich, throbbing pulses, I preferred to keep my fastest modulation sounds on the slower side so I could bask in the dimensionality of the sound picture.

The Pulse also excels at walking the fine line between the practical and the ridiculous. Even the most modulation-heavy mix settings are never overbearing. And while you can generate relatively extreme metallic high-mid peaks in the modulation by bringing the virtual mic proximity in close and cranking the mix, these sounds still have a full-spectrum richness and help the Pulse achieve some of the funkier sounds you hear from Leslies and Fender Vibratones.

The very-well-made Pulse is also super quiet, by the way. I wouldn't hesitate to try it on other instruments or vocals in a mix situation.

If you're chasing realistic rotary speaker tones in a stompbox, the Pulse will likely pay back the extra money you'll spend. The sense of real mechanical motion and dimensionality is perceptibly stronger than a lot of digital rotary simulations I've played. And while the Doppola/Rover-based tone emphasis does give the Pulse a unique voice, it rivals the best high-end Leslie emulators I've encountered in terms of realism and atmosphere.