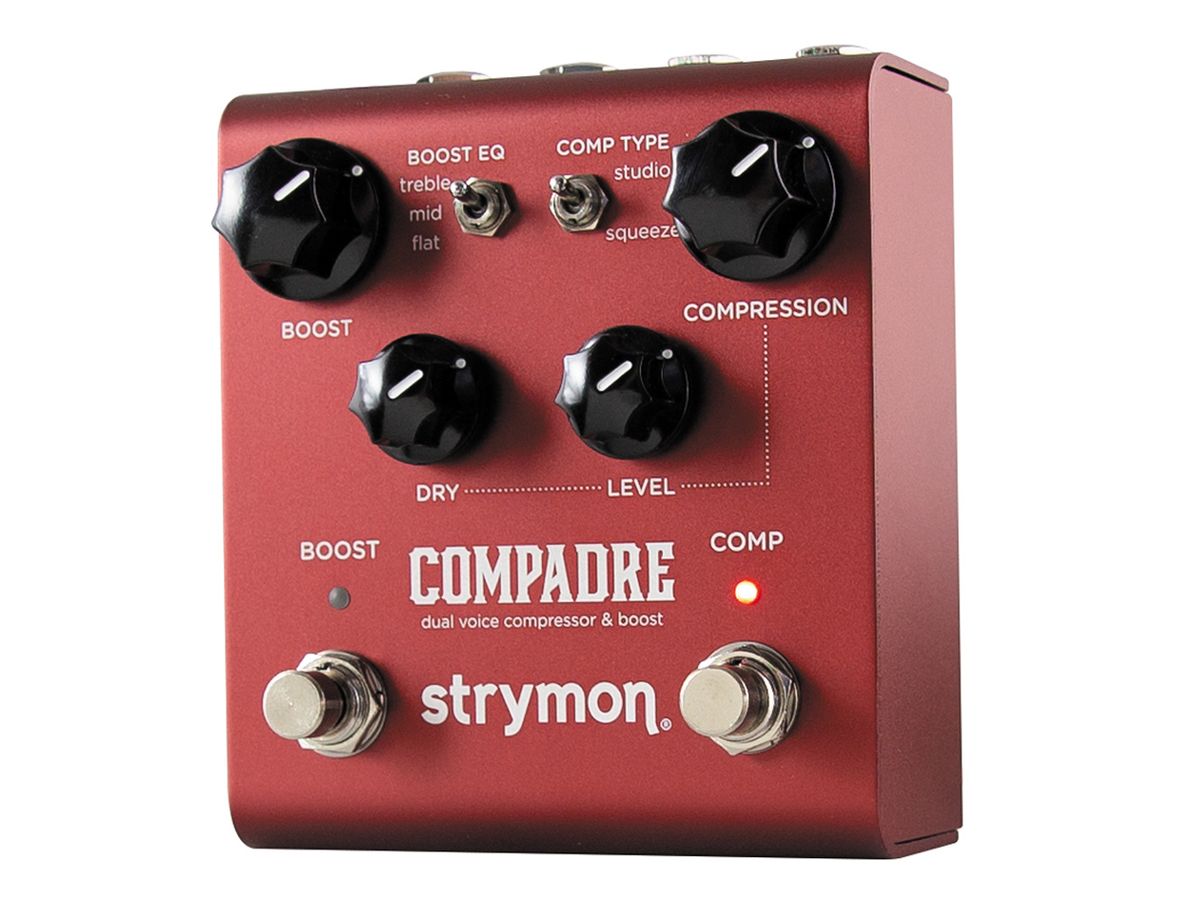 How do you manage dynamics in your playing? Do you work your volume knob constantly? Use a boost to nudge your output? Or maybe use a strategically placed compressor to smooth things out? Maybe a mixture of all of them? The DSP wizards at Strymon turned their digitally focused minds and analog-tuned ears to creating a pedal that can accommodate each of these strategies. The result is the Compadre, a dual-voiced analog compressor with digital control and a flexible boost function that consolidates multiple compression and boost tools and OD in a single, simple, and fun-to-use stomp.

The Compadre offers two compression settings (studio and squeeze) and the boost, which can be switched between flat, mid-, and treble-boosted settings as well as clean and dirty modes. It’s all controlled by a surprisingly simple control array of four knobs and two toggle switches, though the crown of the pedal is home to a mono input and output, an expression pedal jack, a MIDI jack, and the switch for selecting clean or dirty boost modes.

From Stage to Studio, Dusty to Dirt
Compadre offers two basic compression flavors, and where you start probably depends on how pronounced you want the effect to be. If you love the pronounced vintage sound of old Ross compressors and Dyna Comps, the squeeze setting is probably your speed. If you dig the subtler, gentler, more transparent sounds of optical circuits like the LA-2A, the studio side is your best bet. (Interestingly, the Compadre uses VCA-based compression, which is typically associated with aggressive and colorful compression from the DBX-160 and similar studio units. Despite Compadre’s audible likeness to optical compressors in studio mode it has no optical circuitry).

Audible differences in compression are generally subtle in the studio setting, but you can definitely sense the change in dynamics in your fretting fingers and picking hand. In general, studio mode operates at a higher compression threshold, which means you can get pretty loud before the compressor does its thing.

If you love the pronounced vintage sound of old Ross compressors and Dyna Comps, the squeeze setting is probably your speed.

But the compression can be made even subtler thanks to the “dry” control, which mixes your direct and compressed signals. It can help add both the sound and feel of sharper pick attack without totally obscuring the sustain and smoothing effects of the Compadre’s beautifully blossoming studio compression formula.

Over on the squeeze side, the output is a bit hotter and the threshold lower. So a lot more of your signal is compressed—but in a really good way. Roughly speaking, the 9 o’clock threshold setting equals about 3 o’clock on the studio setting. But there are other factors that shape the differences between Compadre’s studio and squeeze compression. The narrower dynamic range is much more pronounced and the attack feels much softer. But you can re-shape the attack significantly by adding un-compressed signal via the dry knob, enabling very specific blends of radical compression and no compression at all. If you’ve ever been frustrated by a compressor that felt like an all-or-nothing proposition, these interactive controls are a likely solution.

On the other side of the Compadre is a 14dB boost that is way more versatile than it’s simple control setup suggests. The treble, mid, and flat modes each offer significantly different EQ curves, so the settings rarely feel redundant or too similar. Each mode is also transformed by the clean and dirty settings. In the clean mode (which you select via the slider on the crown) the full-range boost was big and bold. It’s perfect for quick fills and solos without overshadowing your core tone. With a Fender-flavored guitar and amp setup, the treble boost was a bit too bright, but the darker humbuckers in a PRS SE Hollowbody II loved the setting. In dirty mode the mid and flat modes are especially rich with harmonics and overtones. And I would have no qualms about saving pedalboard space by using the Comprade’s dirty boost voices in place of an overdrive if I had to.

The Verdict
If compression is an essential part of your sound or if you use it strategically, the Compadre could be a very valuable pedalboard asset. It balances classic compression formulas without paralyzing you with a wealth of options. And with the impressively versatile boost circuit along for the ride, Compadre is an impressive partner indeed.