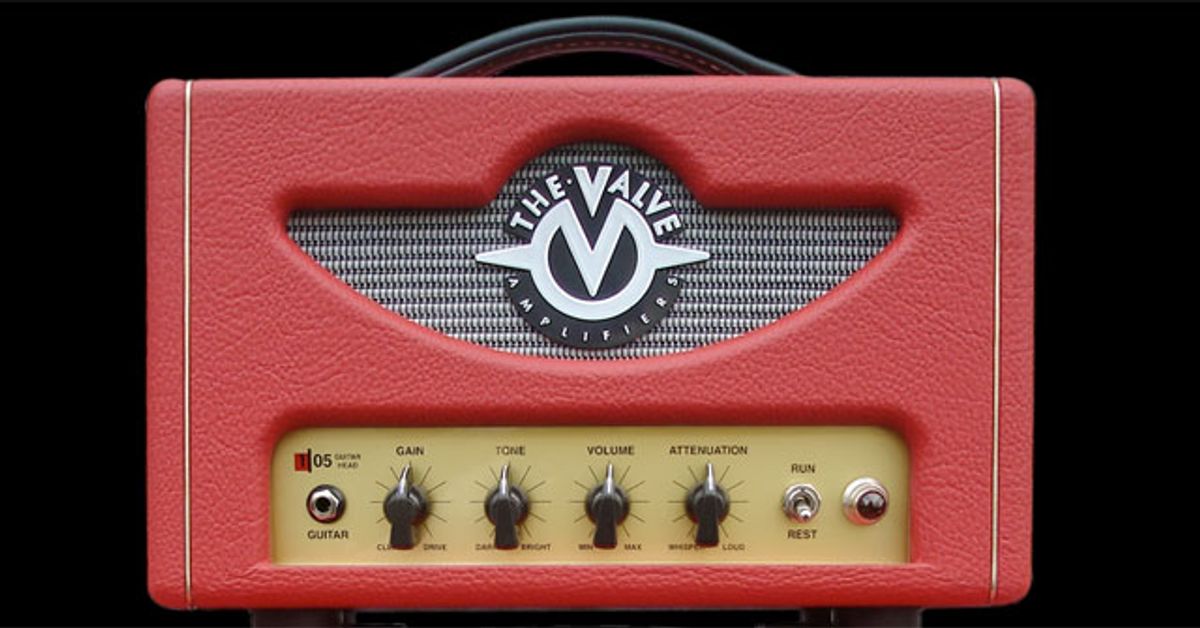 When PG editors told me about an amp that claimed to have the sound, feel, touch response and dynamics of a 1968–72 era Marshall MK II, but at whisper quiet volumes, I immediately jumped at the opportunity to check it out. You see, I’m a Marshall fanatic. Growing up in the ’80s, all any of us guitarists ever wanted was a Marshall, but few of us ever got one until later on. They weren’t exactly the most practical bedroom amps. Since my first, I’ve bought dozens of Marshalls in just about every variation, and I’ve loved them all. Most enthusiasts would agree that the late ’60s to early ’70s was the era of Marshall, and there are thousands of recordings out there to illustrate that point. It’s quite a tall order for any amp to live up to that tone and be built for home and apartment playing volume.

Who’s a Bimbo?
The review model is a head, but the amp is also available as a 1x12 combo with a Celestion G12T-75 speaker. Similar in size to the new crop of low-wattage heads on the market, it comes in at 14"x8.5"x7.5" and 21 pounds. The head is available in either black covering with silver piping or red with gold piping; both feature a “plexi” colored panel that bears a close resemblance to the classic Marshall style. Front panel controls are very simple with just Gain, Tone, Volume and Attenuation, followed by an On/Off switch (Run/Rest) and red jewel power indicator. The back panel is also simple and straightforward with an IEC power cord input, fuses, impedance selector (4/8/16) and single speaker output. It comes stock with 3 JJ tubes: an EL34, an ECC83 and a 12AX7B. Power maxes out at 5 watts but can be brought down to an astonishingly low 1/20th of a watt utilizing the licensed London Power Scaling attenuation, which is controlled by … you guessed it, the Attenuation control.

Play Me
To me, the classic guitar for a Marshall has always been either a Strat or a Les Paul, so that’s what I tested the Bimbo with. Although the manufacturer recommends a Celestion 75, I didn’t have one on hand. I did have a Krank 1x12 cab loaded with a ’70s Celestion 25 (Greenback with a tan dust cap), so I put that to use. Because this amp is meant to be a low-volume affair, it seemed like a logical choice to run a 1x12 rather than a full-blown 4x12. Following the advice of the manufacturer, I dimed all the controls except for the Tone, which was set to 2 o’clock, and plugged my stock ’74 Les Paul Custom straight in. From the first A-chord, it was apparent that this amp means business.

Capturing the crunch and tonal characteristics of a vintage Marshall isn’t an easy feat, but the Bimbo did produce a sound very similar to what I’ve heard many times before, albeit at a much lower volume. How much lower? Well, if you’ve ever had to attenuate a 50- or 100-watt Marshall, this would be the “bedroom” setting on most attenuators. In other words, you’d need to be pulling most of the juice out of a big amp to get it to a volume this manageable. It’s still loud enough that you wouldn’t play it with the family sleeping, but not so loud as to bother anyone on an afternoon. What struck me about the Bimbo’s Tone control was its super-wide range, going from “Woman Tone” darkness at 1 to blisteringly bright and slightly ratty at 10. This is a welcome design choice if you consider that most players will have a range of guitars and pickups, as it will aid in matching the guitar to the amp.

Initially it didn’t feel like the Bimbo had as much gain as a non-master volume Marshall of that era, but the more I played it the more I realized that was a byproduct of not being as loud. Crank a high-wattage amp and there’s interplay between the guitar and amp that makes the pick explode off the strings, and a singing quality that comes from the sheer volume. By design, the Bimbo doesn’t have that. It made me wish for more gain in some situations, but the tone was definitely there. Because of that I spent the majority of the time with the Les Paul playing rhythm guitar and enjoying the dynamic response it offered. When you dig in, you get that great AC/DC kerrang, and lightening up the touch cleans the sound up considerably. Rolling back the volume knob on the guitar further cleaned up the signal, but I had to pull back more than normal to get it as clean as with a higher-powered amp. It’s pretty impressive when you can get an amp to clean up at such a low volume.

Speaking of quiet, it was time to check out the Attenuation control. While playing the guitar I backed the Attenuation down to around noon, which didn’t drop the volume in any recognizable way. It wasn’t until the knob was at 9 o’clock that it really kicked in, and did it ever kick in! By then, I really had entered the “whisper quiet” zone and got the true benefit of the London Power Scaling. Is it perfect? No, but considering the fact that the amp is pushing a twentieth of a watt at that point, you can’t fault the fact that the tone gets a little fizzier (and we can’t discount that the speaker isn’t being pushed at all).

Once again cranking all controls, this time with the Tone full up as well, I switched to the neck pickup of my 2008 Fender American Strat and rolled the volume on the guitar back to about 4. This is a familiar sound as well. It was an impressive rendering of the same rolled-back tone of a cranked Marshall in that clean zone that is so conducive to the Hendrix vibe. Sure, it didn’t have the same harmonic complexity or on-the-brink- of-feedback beauty, but it was definitely on the right track. Ramping the volume up to 10 on the guitar exposed a too-brittle sound that bit hard and had a grumbling fizziness to it. Backing the Tone control on the Bimbo eased that bite and made it much more comfortable to play on. As with most amps when the tone and presence is cranked, it can be difficult to mask just about any mistake or finger noise, so that’s not a setting I’d stay on for most applications outside of the rolled-back clean tone.

Step On It
Seeing as there wasn’t a ton of gain on tap I wanted to find out how the Bimbo handled pedals, so I pulled out a collection of Hartman Electronics stompboxes. I’ve logged hundreds of hours on these pedals with vintage Marshalls, so it was a great test to hear how they mated with the Bimbo. The first pedal was the Germanium Treble Booster (similar to a Rangemaster). Nice! This is clearly where the amp shines. Immediately the feel and response of a big Marshall came into play with the pedal set as it always is, full up with the mid-switch engaged. This conjured up some of my favorite recording sessions, sitting in the control room with the Marshall blowing walls out in the studio. Tonally, it was astonishingly similar and it put a big smile on my face, plus it gave me the explosive pick attack that was missing before.

All of the pedals I tried exhibited similar behavior—this amp loves pedals. With just the amp and a guitar, backing the Gain down took a lot of the power of the sound away but did clean up some of the rougher edges. To me, the amp likes to be full up on the Gain, so you can control the dynamics with the guitar. The same goes for Volume, which allows the EL34 to be pushed harder. It is interesting to hear the difference between the signal being attenuated with the London Power Scaling vs. just bringing the Volume down: two different sounds, the attenuated one being a bit more squashed to my ears.

The Final Bimbo Mojo
So, does the Bimbo live up to its claims? In many ways it does. The fact that it uses an EL34 rather than the typical EL84 or 6V6 of most low-powered amps is an indication of the Bimbo’s ability to nail that Marshall sound. And while it doesn’t have the same controls as a non-master Marshall, the voicing is very Marshall-like. I also didn’t play the Bimbo through a Celestion 75 speaker, which the manufacturer claims aids in bass response and fullness, so it may be a different story depending on the speaker and application. Finally, the fact that it sounded, felt and behaved very much like a Marshall with pedals that was around in that era made a big difference. To top it off, it’s a nicely priced studio amp that records beautifully.