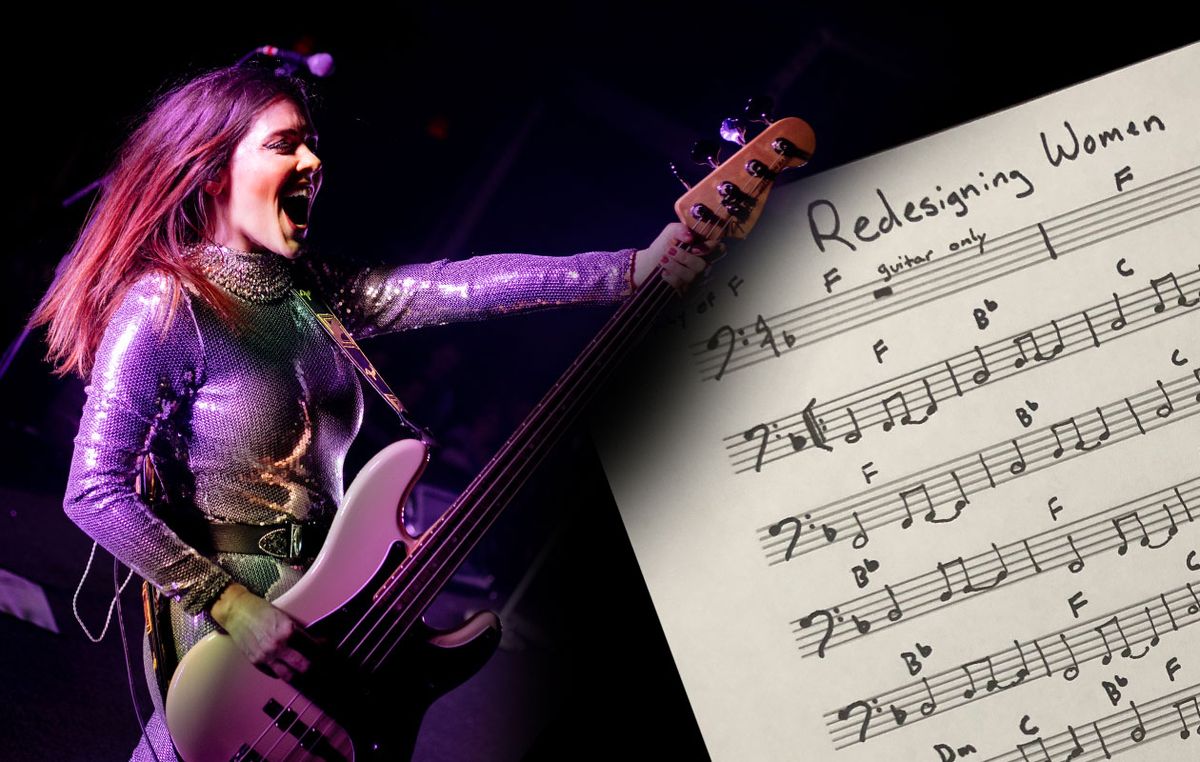 Here’s a fool-proof process for systematically embedding a song in your soul.

As a bassist, you don’t have a lot of wiggle room to make mistakes. When the bottom drops out everyone knows. Not only has this instilled in me an abject fear of being underprepared, but it has also motivated me to develop a system for learning songs thoroughly and quickly. Which helps whether you’re playing a 50-song set in a honky-tonk in Nashville or get a call to sub for Miranda Lambert’s bassist three days before the gig. Both of which I’ve done.

I play bass for pop-country artist Maren Morris and we were tasked with learning three songs from her Highwomen project for a headlining show that was only three days away. I’m going to take you through the exact process I used to learn the material and will use their song “Redesigning Women” as the example. I am also including a video of the process (see below).

Charts or No Charts?
Well, is this a “gig” or a “show?” (That’s a larger philosophical question requiring its own article.) When in doubt, ask if charts are allowed onstage. At any rate, you never want to be so reliant upon your charts that you can’t look away and actively participate in a powerful musical moment. In the case of my gig, charts on a music stand are not allowed onstage. With or without charts, here’s my process for learning songs quickly.

Critical Listening
I listen to the song on repeat, usually while running errands in my car. Rather than sitting with my instrument trying to fumble through a song I don’t know, I save myself a lot of frustration by really listening to the music before attempting to play it. I talk myself through the sections as they go by. In this instance, the form is verse, chorus, second verse, chorus, bridge, chorus. I map it out verbally as I’m listening, identifying each section aloud as it begins. I also listen carefully to the story the lyrics are telling. This all helps to internalize the music.

Sing!
After a couple of listens, I home in on the bass part itself and start to sing along with the bass line. It’s kind of barbershop quartet-y of me, but here’s a universal truth: If you can sing it, you can play it. When my students get stuck, I have them stop playing and just sing the line they’re trying to play. Then they quit stabbing in the dark and let their voice guide them to the notes they need. Of course, this requires that you listen to the song enough to be able to sing the lines on their own. That’s when you really know the part.

But what if you’re not a great singer? The real secret to learning songs (and where I’m going with all of this) is having an ear that is trained well enough that you can hear a line and be able to identify all the notes in that line before you sit down with an instrument. Okay—don’t quit reading. Anyone can do it.

Let’s get your ear trained. Close your eyes. Have a friend play a middle C on the piano. Then have them play any other note on the piano and ask if you think it’s higher or lower than the note you just heard before it. Don’t guess. If you’re having trouble, have them play middle C again. Sing middle C and then sing the new note. You can feel the direction your voice moves to get there and you’ll be able to answer correctly. This is the beginning of training your ear.

Learn Your Intervals!
This is how you commit a 90-minute set to memory in three days. If you can hear intervals, you can learn any song just by listening. Okay, let’s get back to me in my car, listening to “Redesigning Women.” I’m now on the third or fourth listen. In Nashville, we use the number system in lieu of using letter names for chords. “Redesigning Women” is in the key of F, so F is the first note of the scale and is assigned the number 1. The number system helps immeasurably with interval training as you’re already thinking in terms of numbers when it comes to thirds, fourths and fifths. By the time I’m on my third listen, if not sooner, I’m able to say out loud the chord’s corresponding numbers as I follow the music.

This isn’t as easy if the song has chord changes outside of the major or minor scale. But as you’ll begin to notice, most songs these days have a pattern that typically revolves around the 1, 4, 5, and 6 minor chords. In the key of F major, this would be F, Bb, C, and Dm. So now I’m driving around singing “one,” “four,” “five,” “four,” “one” (the verse’s chord progression) along with the chord changes as the song progresses. And just as a reminder, I haven’t touched an instrument at this point. Just listening critically.

A Quick Tutorial on Nashville’s Number System
Nashville is a songwriter’s town, and for years most people made their living writing and recording demos of the next hopeful hit. In a session with a brand-new song, there’s a good chance the demo singer may want to change the key to suit his or her voice. When thinking about songs in terms of numbers on the scale, rather than their letter equivalents, all you have to do to change the key from, say, Bb to B is cross out the flat sign. Rather than spending time laboriously rewriting charts, the city’s session players adopted this method for efficiency. And though there’s no official standard, and also no great way to write out riffs since you’re not using staff paper, this approach works well in the studio.

I’ll show you my number chart of “Redesigning Women” to help you get started.

To train your ear to hear intervals, sit down at the piano. Just like identifying if a note is higher or lower than middle C, play a middle C, and then play another note in the C major scale. Now sing up or down to it. Feel your voice moving. Sing “Do Re Mi Fa” etc., until your voice finds the note you’re playing. Do it until you want to puke. Then do it some more. There are lots of tricks to working on interval training. I have my students write out and sing the numeric equivalents of the notes to bass lines. For example, the melody to “Twinkle, Twinkle Little Star” would be, 1 1 5 5 6 6 5.

Homework
I have my students sing along with their scales as they play them. They internalize lines and parts so much more quickly and they really understand why the parts are what they are. They’re not just memorizing and mimicking a pattern.

Find the Key
While my car is parked, I use a tuning fork app to give myself an A440 and use relative pitch to determine the song’s key. (To save time, you can write down the song’s key before you begin the process.) Now, without yet having touched my instrument, I’m able to drive around, knowing the key of the song (F), knowing the chord changes as they go by and­—because I know the key—visualizing what my hands will be doing on the fretboard.

I’m also taking note of when and where I get lost or tripped up. In the case of “Redesigning Women,” each chorus ends with a measure of two extra beats. I’m paying attention to this before attempting to play the song, so I’ll be prepared when the time comes.

Get It in Writing
It’s only after all of this preparation that I sit down at my writing desk by the piano in my studio, grab a notepad, plug in my bass, and begin writing a chart. By this time, barring anything particularly wacky within the song, the charts are writing themselves and I just dictate them along with the song as it’s playing.

I know where the song is going, the key, the form, the chord changes, the lyrics. But I write it all down anyway, as I find that the act of writing the chart is a critical piece in cementing the song in my brain. If there are any chords outside of the traditional F major scale that have been tripping me up, this is the point where I’ll use the piano or my bass to identify them and make note of them on my chart.

Going Chartless
But what if you can’t use charts onstage? First of all, congratulations! You’re getting ready for a gig that is very important to you and you’re going to play better because the music will be a part of your soul. That is the whole point of music, expressing your soul and touching someone else’s in the process. So, let’s get you there.

I grab a highlighter and stand up. I have a full-length mirror in my studio so I can watch myself play. This is helpful for improving stage presence, as well as giving yourself something to look at other than your charts while trying to memorize material. I start the song and play along. With the prep I’ve done I can make it through the verses and choruses without looking. But there’s a good chance panic will set in as the bridge approaches. Whenever I make a mistake, I stop the track and highlight that moment on my chart.

Next I review the highlighted areas and then play the song again, anticipating the troublesome spots as they approach. I won’t make as many mistakes this time. The more I run the tunes using this method, the fewer of these spots I’ll have, until eventually I may have only one or two per song. But inevitably, if you’re learning a mountain of material, there will be some spots that you’ll need to refer to during the show to perform with confidence.

Okay, Let’s Cheat (a Little)
This is my ace-in-the-hole that has helped me survive many a chartless gig: Write out the song names on a piece of paper. If you don’t have the set list yet, then write song names in alphabetical order. Now, write song keys, where you enter the song, and any trouble spots.

Alternate a different color pen as you write notes for each song. This will make it easier to see at a glance on the ground. Whether you need to learn 50 songs or just a couple quickly, I hope this helps. Good luck and have fun!