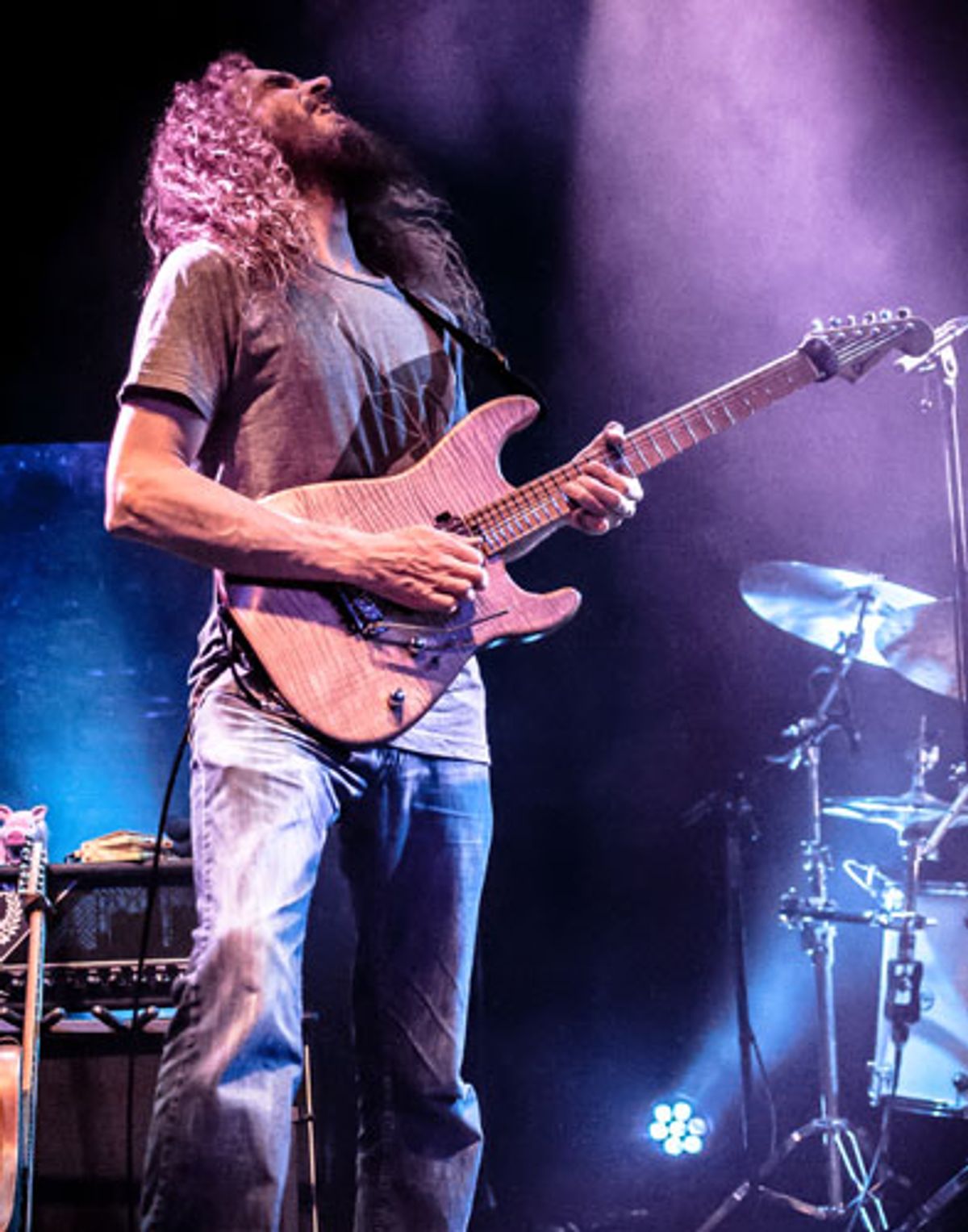 Break free from tired old patterns by rethinking your approach to shred.

Chops: Advanced
Theory: Intermediate
Lesson Overview:
• Understand how to build arpeggios from the ground up.
• Create long flowing lines that follow the changes.
• Develop a more fluid legato technique. Click here to download a printable PDF of this lesson's notation.

My students often ask, “Exactly what is an arpeggio?” They’ve likely heard or read the term used by some of their favorite guitarists, but are still trying to figure out what it means. In this lesson, I want to address this question. We’ll explore ways to incorporate arpeggios in our lead playing, and also discover how arpeggios can generate creative ideas that lie outside a scale-only approach to improvisation.

Simply put, you create an arpeggio when you play the notes of a chord individually. This can be a useful tool for soloing, as it allows you to easily target the chord tones of a progression and create musical lines that work well over the harmony.

We’ll begin with arpeggios for major and minor triads, and also try some examples based around major 7, minor 7 and dominant 7 arpeggios. These arpeggios can be expressed as formulas, using numbers to indicate degrees of a major scale:

These formulas will be important when we discuss some of the single-string arpeggios.

One way many guitarists learn arpeggios is by playing some of the sweep-picking shapes made popular by shredders. Ex. 1 and Ex. 2 show two of these: A minor and A major patterns, respectively. The problem with these patterns is that they tend to sound predictable and lack musicality—similar to running straight up and down a scale. So why are players attracted to them? Well, once a guitarist develops an ability to sweep pick, these patterns allow a convenient way to play some very fast and “impressive” ideas.

Instead of relying on these typical patterns, let's instead look at some more creative ways to employ arpeggios in our soloing. To do this, I’ll examine concepts embraced by a few of my favorite players through the years. The first idea was popularized by the great Guthrie Govan, but has also been used by Shawn Lane and Glenn Proudfoot, both of whom frequently apply it to diminished 7 arpeggios (1–b3–b5–bb7).

This concept involves playing arpeggios along one string, sometimes with the help of tapping. This technique can be simple to execute, once you understand how the intervals of each arpeggio are distributed along the string in relation to a given root note.

Let’s say our root note is E at the 12th fret of the 6th string. We can easily locate our other needed intervals to complete the arpeggio by knowing a few simple relationships. Here’s a handy list:

One fret below the root: 7

Four frets above the root: 3

Seven frets above the root: 5

Those four intervals create a nice major 7 arpeggio along a single string. You’ll notice in Ex. 3 that to play the 5 at the 19th fret, I use right-hand tapping as Guthrie often does. The great thing about this way of viewing these arpeggios is that regardless of what string or fret our root note is on, these interval relationships remain the same relative to it.

The wonderful thing about visualizing the intervals this way is that it’s simple to alter the major 7 intervals to create other arpeggios ... a minor 7 arpeggio, for instance. If you look at the formulas above, you’ll notice that the only difference is the 3 and 7 are lowered by a half-step—one fret—in a minor 7 arpeggio. In Ex. 4, we take the major 7 shape from Ex. 3 and lower the 3 and 7 by a single fret.

Ex. 5 shows how we can use the same concept to create dominant 7 arpeggios by simply using a combination of the major 7 and minor 7 patterns we’ve already discussed. The dominant 7 chord and its arpeggio consist of the root, 3, 5, and b7. If we arrange these intervals along the string the way we did before, we get the pattern below.

Once you have these patterns under your fingers, you’ll find ways to move them around into longer sequences. One way to do this is by using a simple octave-up concept. Move the pattern you’ve just played on the 6th string to the 4th string and shift it up two frets to produce the identical notes an octave higher. Ex. 6 is a fun little musical line that includes a “hammer-on from nowhere” when crossing over to the 4th string. Try to play that first note on the 4th string at the same volume as the other notes. After mastering this, you’ll have a very fluid (and fast) way to perform some less-typical arpeggio patterns.

For those brave souls who like to push the boundaries, Ex. 7 shows how we can take this even further. Because our original arpeggio line started out on the 6th string, it allows us the unique ability to simply repeat the same notes on the same frets up on the 1st string. This gives us a fluid three-octave arpeggio pattern. Again, make sure you’re keeping the volume of the hammered notes even and consistent. This example is reminiscent of the line played by Guthrie Govan in his incredible tune, “Wonderful Slippery Thing.”

So there you have it—a compelling and somewhat different concept for playing arpeggios that you can apply to your solos. Start by slowly playing these patterns until they’re effortless. At that point, you’ll be surprised how easy it is to weave these sounds into your lead lines at will. Good luck with them!