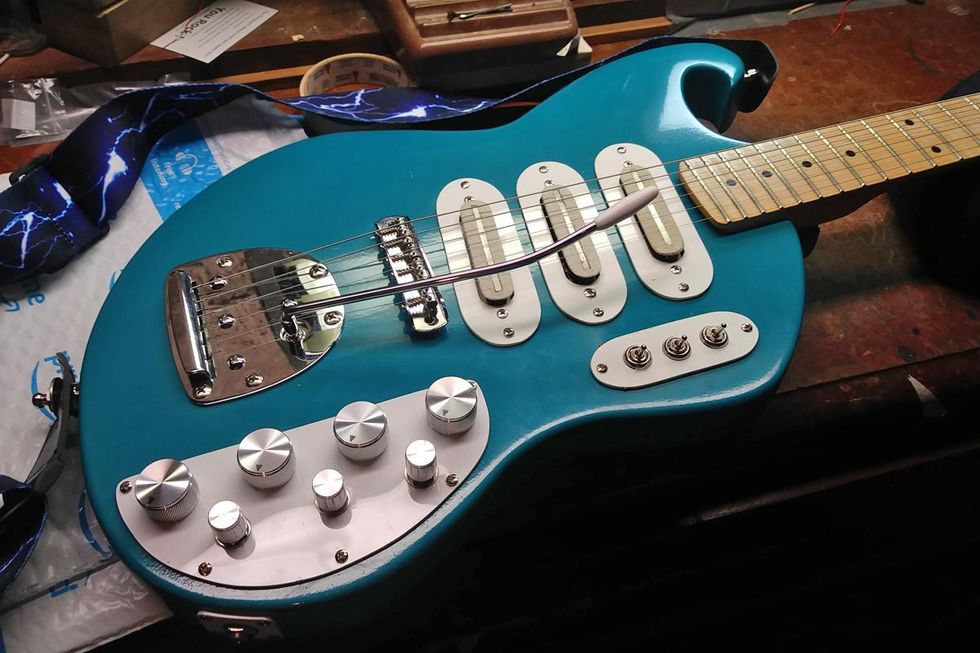 A former Guild employee builds guitars and winds his own pickups by hand. Here's his latest creation.

I've been building guitars on and off since the '80s. I worked at Guild Guitars in Westerly, Rhode Island, for two years under Kim Walker's tutelage. After leaving, I worked at a music store as manager, repairman, and buyer.

I haven't been active in the music field since the mid 1990s. It's very hard to work as a builder or repair tech alone with no reputation. I build guitars now as a form of therapy. I don't really think about what I'm going to do with them when they're finished.

This is the latest guitar I've built. I call it Blue Hawaii, and it's actually the second of a set of three guitars. The third one is still in my head.

Blue Hawaii is a tribute to 1960s import guitars with a nod to the surf scene. The pickups are my own version of the old Danelectro lipstick tubes but without the tubes. I used 42-gauge wire wrapped directly onto alnico 6 bar magnets. The metal interferes with the magnetic field, so I leave them open. These pickups are handwound, as in bobbin in left hand and wire in the right hand. They have a very tight and snappy kind of sound, not much low end—think Fender with a bit of Rickenbacker mixed in. I made a set of these for my 12-string, too.

Each pickup has a volume, tone, and on/off switch with a master volume as well. The pickup covers are white PVC, the bridge is a salvage, the tuners are Gotoh, and the neck is a Chinese import. The guitar's body is a solid slab of poplar. The finish is nine coats of Rust-Oleum Lagoon. That's it, no clear coat. This guitar took about three months from start to finish, including finish-drying time.

I don't use many power tools, mostly because I can't afford the good ones. I just have a cordless drill, belt sander, jigsaw, and palm sander. I source most of my parts through Amazon. What I can't find, I make.

I've always loved the '60s and early-'70s imports and this series is my take on the various makers. The surf vibe of this guitar is because that's what those guitars were primarily used for. I decided on a set of three guitars like this, in primary colors. First is red, then blue, and finally yellow. The yellow guitar is still in R & D.

Reader Guitar of the Month: Portraits on a Plywood Epiphone