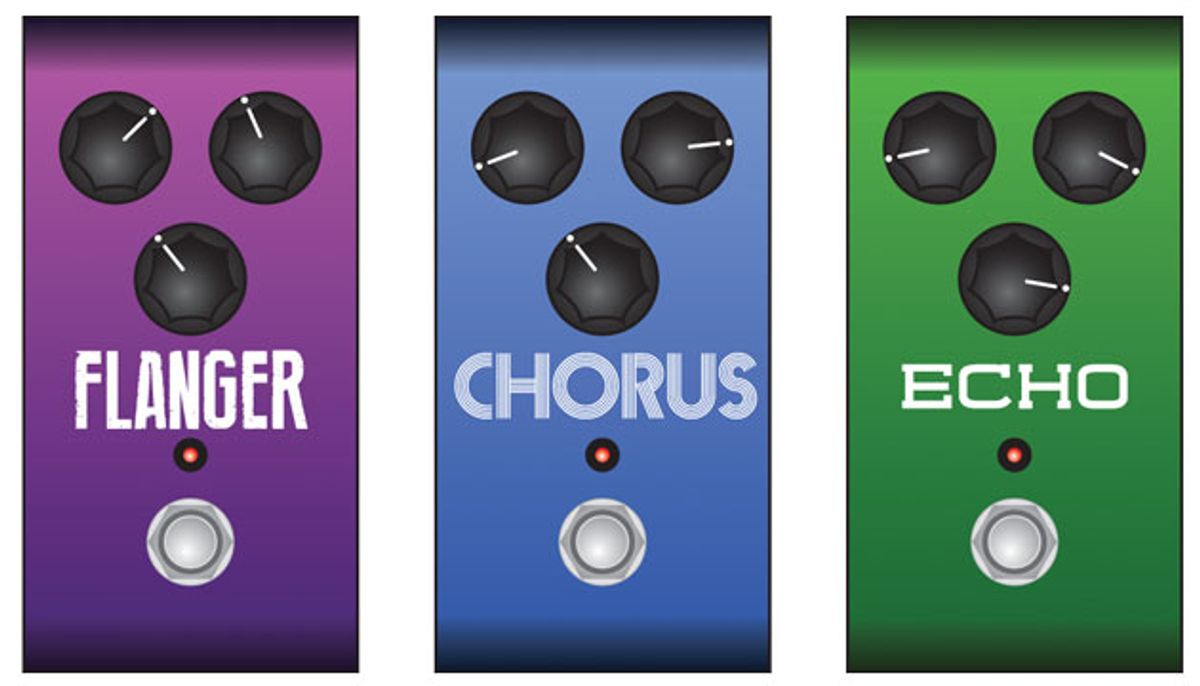 The origins of flanging, chorusing, and echo.

Nowadays flanging, chorusing, and echo are common time-based effects, but you may not realize that they have origins in mid-20th-century recording technology. All three originated as double-tracking effects, used to create the impression of two parts when in fact only one part was performed. They all work by creating a replica of a signal, and then mixing the original and the replica together with slight timing differences between the two.

Les Paul was a pioneer of doubling and multi-tracking techniques. He used acetate disks to create elaborate orchestrations and harmonies with just one or two musicians, back before magnetic tape was common. But the advent of studio tape recording allowed a more feasible use of special effects to enhance the music beyond simply capturing a performance. Let’s look at some of the most common effects.

Slap Happy
The slapback echo heard on many rockabilly and rock ’n’ roll records of the ’50s was the first such effect to gain widespread use. As music became more electrified, producers and recording engineers sought ways to make everything sound bigger—and what better way than to turn the recording studio into a virtual concert hall?

By using the inherent delay between the record and playback heads (determined by tape speed and distance between the recorder’s heads) they mimicked the effect of a sound echoing off the “back wall.” The tape deck’s two speed options allowed for two fixed delay times, generally in the 70 ms to 150 ms range. These technical limitations defined the slap effect that became a trademark sound of these recordings.

As music became more electrified, producers and recording engineers sought ways to make everything sound bigger—and what better way than to turn the recording studio into a virtual concert hall?

Fab Flange Legend has it that in the ’60s, John Lennon grew tired of re-singing his vocal parts in the studio to add layers, so recording engineer Ken Townsend came up with the idea of sending the vocal track’s sync signal (from the record head) to a second tape deck’s input. By slightly offsetting the speed of the second deck, its playback could have a short but controllable delay (typically 10 ms to 20 ms) relative to the original deck’s playback head.

Additionally, the second deck’s speed could be manipulated to create movement between the two signals, simulating two independent voices from a single performance. Voilà! Double-tracking chorus was born. Now John could enjoy a cigarette while the recording engineers sweated the details. If the second deck’s speed was faster than the first’s, its sound would appear before the first deck’s, resulting in “through zero” flanging, a trippy sound that evoked jet engines and space/time warps.

Chips Ahoy!
By the 1970s, the advent of LSI (Large Scale Integration) semiconductor chips led to analog bucket-brigade delay line ICs. These opened up the possibility of replicating these tape-based effects in a simple and repeatable manner. But the stompboxes that employed these chips offered more than convenient simulations of tape effects—they had their own unique mojo.

Nowadays we have enormous computing power available on a single chip. Still, when creating modern double-tracking effects, we often invest much effort in replicating the sound and soul of the primitive time-based effects painstakingly developed by the recording engineers of the ’50s and ’60s.