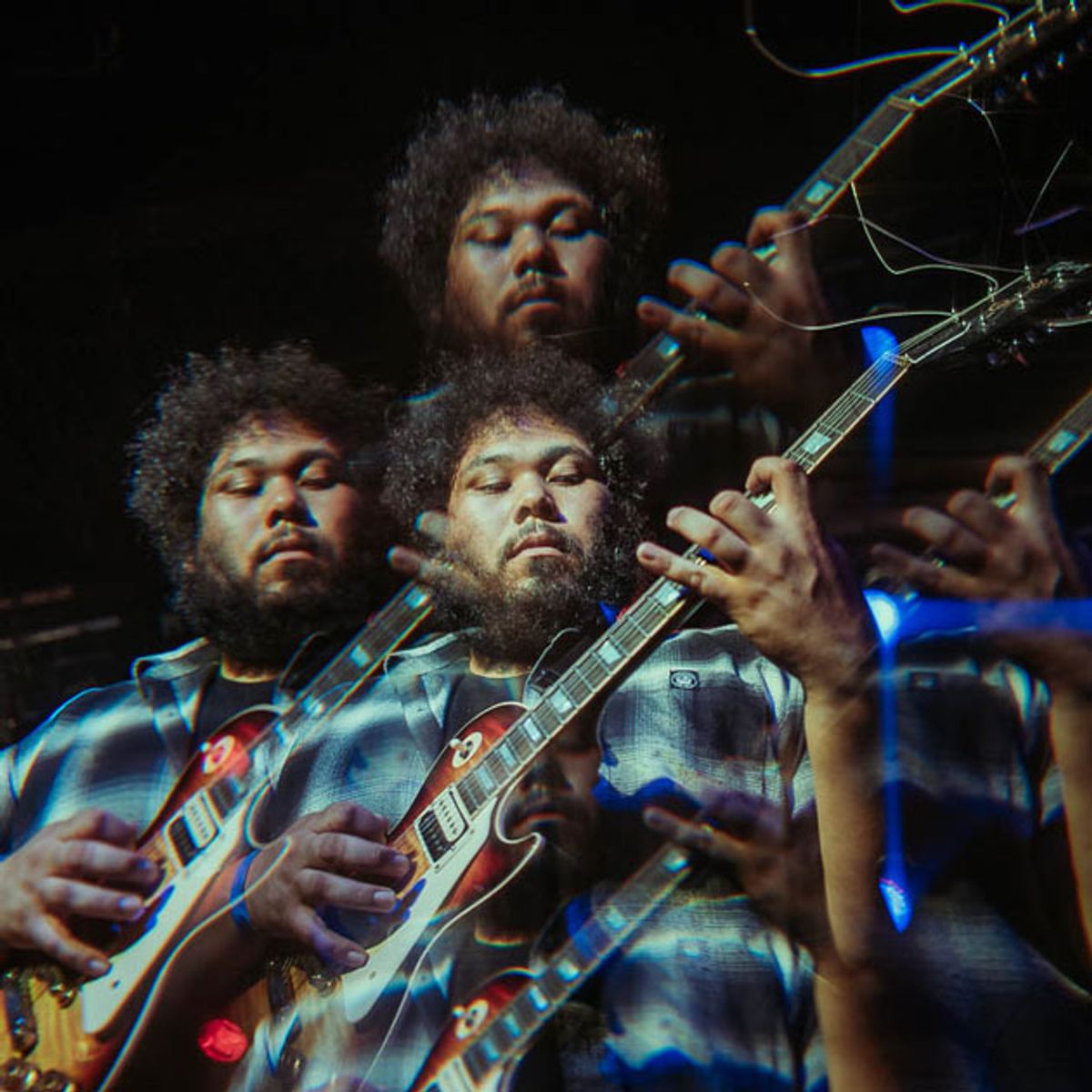 Video
Renaissance musician Will Swan is the founder and co-guitarist in Sianvar, as well as the leader of a second chart-climbing band, Dance Gavin Dance, and operates the Blue Swan record label.
Photo by Michael-Rex Carbonell

A driven, eclectic indie guitar player and his post-hardcore pals shatter expectations and the charts with their debut album Stay Lost. His trusty Shawbucker-rigged Les Paul, a stock Strat, and a secret-weapon Orange Rockerverb 100 come along for the ride.

In the world of post-hardcore music, there are few musicians as busy or as prolific as Will Swan. At any time he can be found recording or touring with one of the many bands he’s founded, or running his label, Blue Swan Records. But right now, while continuing to pursue his highly original guitar style, he’s wrapped up in Stay Lost, the latest release from his post-hardcore supergroup Sianvar.

Spastic yet melodic, and ambient yet aggressive, Swan’s songwriting and guitar approach is an amalgam of his extensive influences. He recalls his first musical loves being “funk and weird shit like my dad listens to, like George Clinton.” That quickly gave way to the radio rock of his formative years, and continued on to the intense-yet-melodic post-hardcore sound that he entrenches himself in today. Swan has been successfully employing those influences since the formation of his band Dance Gavin Dance in 2005. While DGD continues to be Swan’s main focus—the band’s latest album, Mothership, debuted at No. 13 on Billboard’s top albums chart in October—it’s Sianvar’s Stay Lost that’s currently creating waves throughout the scene and landed on six of Billboard’s charts.

Swan founded Sianvar in 2013 when he was looking for yet another creative outlet. He launched the band with like-minded vocalist Donovan Melero of Hail the Sun, guitarist Sergio Medina of Stolas, drummer Joe Arrington of A Lot Like Birds, and that same band’s bassist, Michael Littlefield. Another A Lot Like Birds alum, Michael Franzino, who played guitar in that group, plays bass in Sianvar today. Sianvar’s 2014 debut EP and subsequent tour was a surprising success, inspiring Swan and the rest of the quintet to write and release their first full album, Stay Lost.

“That’s my mentality going into any record:
top what you did last time.”

And while it continues in much the same vein as the Sianvar EP, the album pushes every aspect of the band’s sound, from advanced musicianship to a melodic backbone, much further. To casual listeners, songs such as the first single “Omniphobia” and the title track might seem to be on the edge of falling apart, but they’re actually masterfully composed, with each varied element locked tightly to the others. It’s clear that Swan and his band are in full control of their sound.

Swan took some time out of his overachiever’s schedule to speak with Premier Guitar about Stay Lost, why he always puts artistry first, and how he juggles what seems to be one of the most demanding schedules in post-hardcore.

You’re very busy with one successful band, Dance Gavin Dance, and your record label. How did Sianvar come together?
I wanted another creative outlet, so Sianvar was my brainchild, I guess. I just wanted to find different people from different bands that were all real standouts, and also friends. We wrote and recorded the first EP in two-and-a-half weeks. We put it out and it did way better than any of us thought it would. So we wrote Stay Lost in about a month and recorded it in about a month-and-a-half. Finding the time to do it and getting it done just seems unreal now, looking back. But I love the finished product. Sianvar is a collaboration and everybody is putting in their two cents. It instantly started coming out like it was its own thing.

How would you describe the band’s musical growth from the EP to Stay Lost?
For the EP, I think, we were just trying to go insane. We got together real quick and it was just like bam—guitar insanity. But for Stay Lost we were like, “Let’s sit down and write an album. Not just a bunch of songs.” We wanted the songs to have something that makes them unique—to write a full record of stuff that’s not going to get boring and that’s hard to classify.

The cover of Sianvar’s new album, Stay Lost, more than hints at the psychedelic sounds inside, but the set’s pop sensibilities and abundant melodies make it remarkably accessible. Stream the album here.

While remaining extremely listenable, Stay Lost blends a lot of really challenging time signatures, dissonance, heavy passages, and both clean and grinding guitars. Was this mix something you specifically worked at, or was that just the outcome of your styles?
Underneath all of our wanting to get into some psychedelic and crazy territories, we still want to do something that has some pop sensibility. I think Donny is who to thank for the listenability, because his melodies are so catchy. They make some of those time signatures feel not so crazy.

Were you able to stretch out as a guitar player in any new ways on the album?
Yeah. I feel like every time I write, I’m learning stuff, I’m getting better, and I’m doing things I don’t normally do. It’s always fun and exploratory for me. That’s pretty much my mentality going into any record: top what you did last time. I’m writing music
I would want to listen to, and when we’re done with the product I’m usually pretty proud of it.

How would you describe the difference between your playing style and Sergio’s?
It’s very different. Sergio’s been classically trained. He has insane technical ability. We have different influences and we’re going for different things. His vision and my vision aren’t the same, but we are both willing to compromise and make something that is cohesive.

There are a ton of textures and tones on Stay Lost. Did you guys do a lot of experimenting with gear while recording?
I used my live rig. For all my stuff, I swear by my Orange Rockerverb 100. There’s something special about my head, too. I’ve used it for every DGD record and every Sianvar thing I’ve done. It constantly just kills every other amp. Other than that, I use a ’74 Marshall cab with original Celestion blackbacks in it. And I’m rocking a Les Paul Standard, and it’s sounding great.

Beauty and intensity blend seamlessly in Sianvar’s music, as evidenced by the sonically blissful first single from Stay Lost, “Omniphobia.” For guitarist and leader Will Swan and his 6-string counterpart Sergio Medina, the song’s a nonstop but subtle shredfest, ripe with two-handed tapping and fierce riffery. Swan plays chiming tones on his Fender Stratocaster in the bridge position, while Medina lets loose on his Fender Special Edition Custom Telecaster.

Will Swan swears by his vintage Orange Rockerverb 100 MKI for his tone, and pairs the head with a 1974 Marshall slant cab with its four original Celestion blackbacks.

I’m also hearing a lot of single-coil tones on the album.
Sergio uses a Fender—kind of a Telecaster. [Editor’s note: It’s a Fender Special Edition Custom Telecaster Spalted Maple HH with a coil-tap.] It’s a weird guitar that has humbucker and single-coil tones, and he goes between them. I use either my Les Paul or Fender Strat. So that’s another single-coil guitar. I like those single-coils and how much character they give you on distorted lines.

What about effects?
Just too much stuff, man ... an insane amount of stuff. For this record I probably used, like, 20 pedals. But my Boss SY300 synthesizer pedal is amazing. And the Eventide PitchFactor is insane. The Subdecay Octasynth is also a pedal I love using a lot. Those are probably my big three right now.

“I use either my Les Paul or Fender Strat. I like single-coils and how much character they give you on distorted lines.”

What inspired you to start Blue Swan Records, and what’s it like to run a label?
Everything getting pushed by labels was just not selling. It was like they weren't putting any thought into the actual music. It’s just about what’s going to make money. And if everybody is thinking about money, then who is thinking about the art? I wanted to start a label that was only signing bands based on their ability to make good music. There was nobody out there on any labels doing post-hardcore other than us. Now, Hail the Sun’s out there and other bands I have are also growing. I definitely feel like I’ve already succeeded in my original plans for Blue Swan.

What are some of the unique challenges of being independent and on your own label?
Everything is a challenge: getting people to take it seriously, not having a huge corporation backing you, people trying to screw you over. I’ve always been an artist first, so having to take on the business has been interesting. But I have to because I’ve put myself in that position. It’s tricky to make sure I stay true to my roots and don’t get sucked into the numbers game.

On your first tours with Sianvar, it seemed like there was uncertainty about the band’s future. With the success of Stay Lost, are you seeing Sianvar as a full-fledged project that you're committed to?
Yeah, I’m totally on board for Sianvar. I don’t see any reason to stop working on it. I think people psyche themselves out, or the expectation of performance gets to people. It’s like, “We have to reach this level. We have to do this.” They forget the heart of it. Isn’t it just fun to make the music—to make something you’re proud of, put it out, and let people listen to it?

Does Sianvar have any more touring scheduled to support Stay Lost?
We’re going to try to stretch it out and do some more touring for sure. We might play some one-off shows on the West Coast before the year is over. We’re trying to get all of our other bands’ tours figured out so we can see when we can slip in some Sianvar dates.

Are there new genres you’re looking to get into or experiment with that might surprise your fans?
Actually, a project I haven’t announced yet is going to be way different than any of the stuff I’ve done. No distortion, no heavy punk. It’s going to be more chill. Maybe funky, maybe indie … just different. So that’s probably going to be a shock for people, not to hear me coming out and trying to melt faces.

Stay Lost is the first full-length from Sianvar and it landed on Billboard at No. 5 on the Top New Artists chart, No. 98 on Top Current Albums, No. 23 on Independent Albums, No. 36 on Top Rock Albums, and No. 13 on the Hard Rock chart. Did you expect it to do so well?
Not at all. The EP did all right, but it wasn’t groundbreaking, as far as the reactions. So for this record, we felt no pressure. We wanted to put in the work, and we didn’t even know if anything would come of it. It was just a labor of love. For people to receive it so well, come out and support us on tour, and buy the record was definitely mind-blowing for us. We all really appreciate it and want to tour as much as we can.