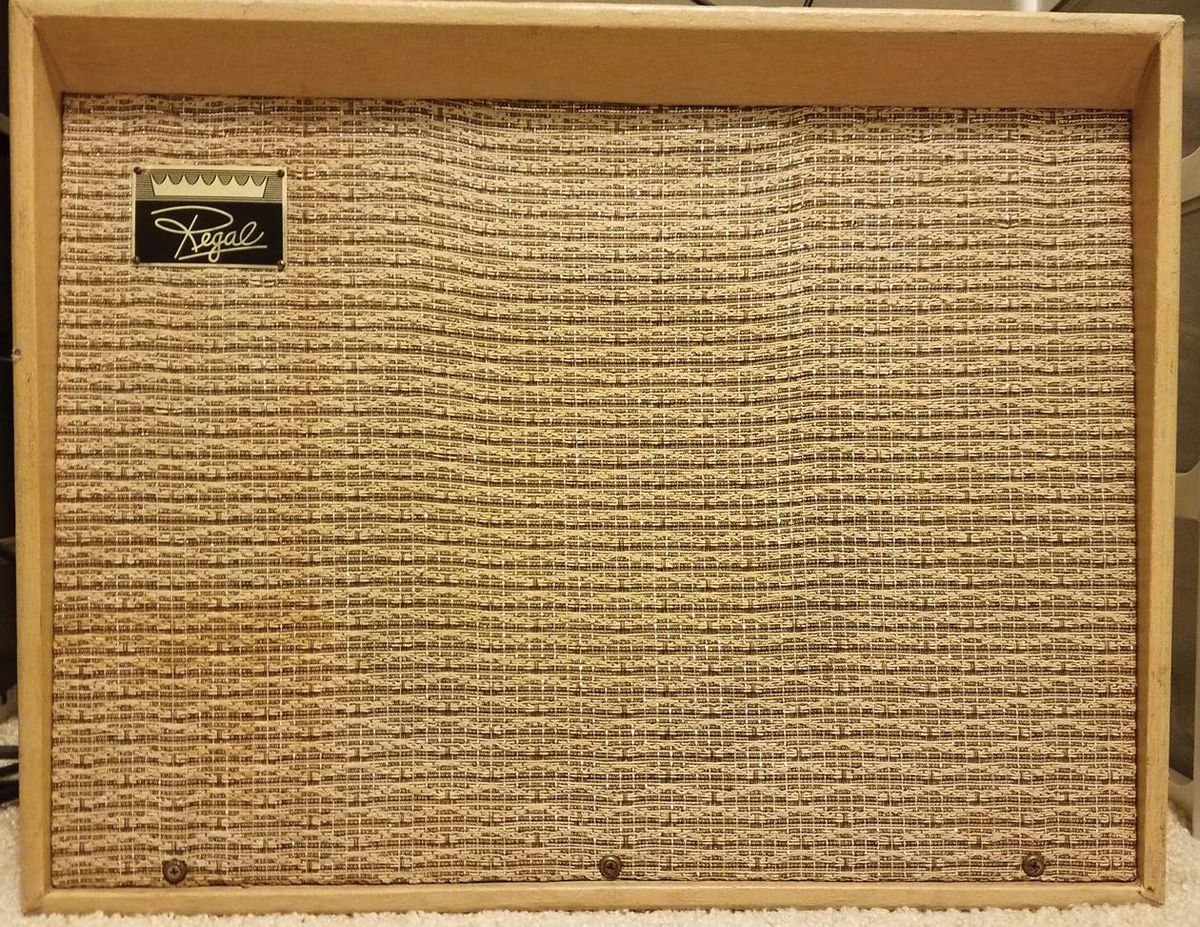 Except for the gain issue reader Rick Patterson describes, this month's amp is in remarkably good condition for

Transforming a vintage pedal platform into a powerful player.

I have a '60s amp sold by Fender. It's a Regal R-1160 dual 6V6 with tremolo. Seems to be the same as a Lectrolab R600B. This amp does not saturate before almost full volume, and it's very subtle at that. I read your column on modifying negative feedback loops and I'm wondering if you could look at the schematic and show me where I would make this modification and what value caps you would recommend? I'm new to this sort of modification and would like to improve the tone without destroying the amp. If you need any pics, I can provide whatever you like.

Thanks for your consideration,

All components and controls on this Regal R-1160 seem original, except this replacement speaker:
a Ted Weber Legacy Series.

Thanks for reading Ask Amp Man and thank you for your question. But even more, thank you for bringing this amp to my attention. I don't believe I was aware of Fender selling any amp that didn't have their name on it, but it does say right on the control panel “Distributed exclusively by Fender Sales Inc., Santa Ana, Calif.," so it's a very cool little piece of history, for sure. And to top it off, sans replacement speaker, it's in great shape!

Regarding your desire to modify the feedback loop in this amp to enable it to break up sooner: That's a good idea and a good place to start with many amps, but unfortunately not here. The first thing I noticed on the schematic you sent along with your question was that this amp doesn't even have a negative feedback loop! Not really unusual, but most amps without this tend to break up a bit more, so I was surprised that you say this does not.

Since both channels on this amp are virtually identical, why don't we leave channel 2 stock and modify channel 1 to bring it closer
to your expectations.

I would first suggest making sure the preamp tubes are not a contributing factor, and then possibly have a qualified tech give the amp a quick check to see if all seems well. Pay attention to the bypass capacitor across the output stage cathode resistor (Photo 1). While this doesn't control the amount of front-end gain in the amp, a bad or weak one can sure make an amp sound anemic.

If the tubes and bypass capacitor seem good but the amp doesn't have a lot of inherent gain, this could actually be an asset to some musicians. There are a couple of scenarios where lower gain is preferred—one being in a harp amp, but the other, more near and dear to guitar players, is if the amp is to be used as a pedal platform. In this case, the lower gain and higher headroom of an amp can really let the pedals shine. Some refer to such an amp as “pedal friendly."

That said, your desire is to get more crunch from this '60s jewel, so I do have a suggestion. Since both channels on this amp are virtually identical, why don't we leave channel 2 stock and modify channel 1 to bring it closer to your expectations? Sound good? Okay, let's go.

Hot modding. First, locate R7 in the amplifier (Photo 2). This is a cathode resistor for the first gain stage of channel 1. It is un-bypassed, so let's add a bypass cap across it to get more signal gain from this stage. I would use anything between a 4.7 µF to 10 µF, 25V DC. Plenty of amps use a 25 µF on up to a 250 µF cap, but anything that big may yield too much gain in the lower frequencies and that's something that would just muddy up the sound in a low-power, open-back amp such as this. Be sure to connect the positive side to the tube end of the resistor. If access to the resistor is too prohibited, connect the + side to pin 8 on the tube socket and connect the – side to the ground lug of the terminal strip.

Next, locate R15 (Photo 3). This will be one of the mixing resistors supplying the signal from channel 1. According to the schematic/parts list for your amp, this should be a 220k resistor. In your amp, however, both mixing resistors are 470k. This could also be a contributing factor in the lack of gain you say the amp has, but, regardless, let's leave channel 2 alone. I would suggest attaching a 220k resistor in parallel across the 470k resistor from channel 1. This will give you a stronger signal from channel 1.

There are a few other tricks that can be done, but some require the actual removal of components from the amp. The complete unsoldering and removal of components from tube sockets and terminal strips is often best left to someone with a considerable amount of experience in such matters. Other mods can require a bit of trial and error before a final component value decision is reached. I believe the modifications done above should give you an amp that you can push into overdrive much more easily, while leaving one channel cleaner for other uses. You could even get creative and use an A/B box to switch between the two channels for a lead/rhythm setup.

There you have it. I hope your Regal can now generate some royal sounds!