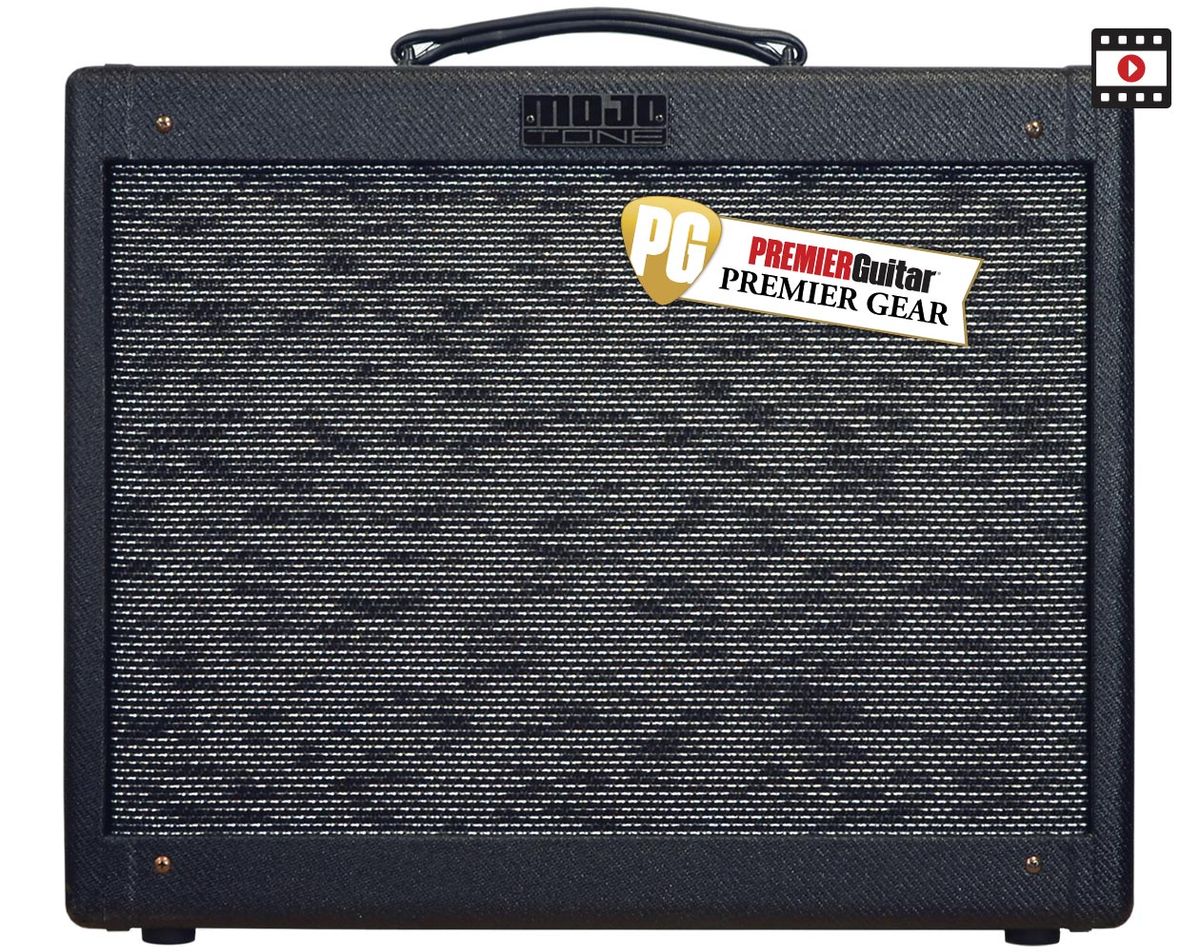 A killer handwired tweed-style amp for under a grand.

According to Mojotone, tweed Deluxe kits based on the beloved 5E3 circuit have been the business’s bread and butter. But while the new USA-made BlackOut (available only in a $995 pre-assembled version) is 5E3-inspired, it’s not a clone. Its updates retain tweed character while conceding to modern tastes. So you get 2-band tone control à la Fender’s 1960s blackface models, greater clean headroom, and both high- and low-gain input channels.

Ironically Authentic
Despite its deviations from the 5E3 spec, BlackOut is one of the most authentically tweed-sounding modern amps you’ll find. My very first amp, a 13th-birthday gift, was a tweed Deluxe that a previous owner had painted black. I still own it. And every time I play—or even look at—BlackOut, the déjà vu is overwhelming.

I’d be shocked if 90 percent of contemporary players didn’t choose BlackOut over a vintage tweed Deluxe in a blind-listening test.

Updates notwithstanding, this amp is truly made the way they used to make ’em. The components are handwired on circuit board. They’re Mojotone-brand parts—good stuff. The power transformer is a spiffy Heyboer. The cabinet is solid pine. (Among the few concessions to cheaper modern materials are the plastic tube sockets and input jack assemblies.) The workmanship is generally excellent. I encountered my only issue when disassembling the amp to inspect the electronics. The rear panel that protects the tubes seems to have been attached before the black finish had completely dried, and some paint peeled off in the process, buut only on the inward-facing side, which isn’t normally visible. (Mojotone says it has since remedied the humidity issue that causes this problem).

Interestingly, the 12" speaker is a ceramic-magnet 30-watt Mojotone BV 30H, the company’s Celestion G12H30 soundalike. I can’t say the speaker imparts a particularly “British” flavor, though—this just sounds like a really nice tweed. You certainly get a tweed’s iridescent sparkle and exquisite dynamic response. The first audio clip features the normal channel with all knobs at noon.

A Tweed in Need?
After years of reader complaints about how crappy my demo clips sound every time I review a tweed-inspired amp, I’ve started adding a disclaimer: For all the lore attached to tweeds, many modern players just don’t relate to them. They expect warmer, fatter tones when they crank the gain. Maxed-out tweed tones often get flabby on the bottom and screechy on top.

Here, though, there’s markedly more clean headroom. In fact, when plugging a guitar with vintage-output pickups (like the 1963 Strat used for the demo clips) into the normal channel, the distortion doesn’t get terribly heavy—even with the volume cranked. Tones are relatively tight, minus those potentially alienating tweed-on-10 characteristics.

The modern channel employs both sides of the 12AY7 preamp tube, one cascading into the other. As you’d expect, tones are far gainier, yet they remain well defined. Happily, there’s no loss in dynamic response. Check out the second demo clip, where I floor the amp’s gain and manipulate the guitar’s volume knob for tones ranging from crisp to burnt.

EQ Times Two
If you want tighter, more modern high gain tones, just plug a crunch pedal into the normal channel, as heard in the third demo clip. (I used homemade distortion and vibrato pedals and a JAM analog delay.) You get both singing sustain and articulate note attack. Ambient effects retain their definition.

The final demo clip showcases the blackface-style EQ. I play a repeated riff, exploring the full ranges of bass and treble controls between repetitions. No question: The augmented tone stack dramatically expands the range of possible tones.

The Verdict
Mojotone’s BlackOut performs an impressive feat—capturing the coolest aspects of tweed tone while refining it in ways that may please players who might not be comfortable with strictly vintage models. The result isn’t some wishy-washy compromise—tones are rich in tweed character. You simply get more headroom, greater spectral variety, and tighter-than-tweed high-gain tones. I’d be shocked if 90 percent of contemporary players didn’t choose BlackOut over a vintage tweed Deluxe in a blind-listening test. The amp is expertly made in true vintage style using top-shelf parts. It’s a great deal too. You’d ordinarily expect to pay more than $995 for a fine handwired tweed, let alone one with such appealing sonic refinements.