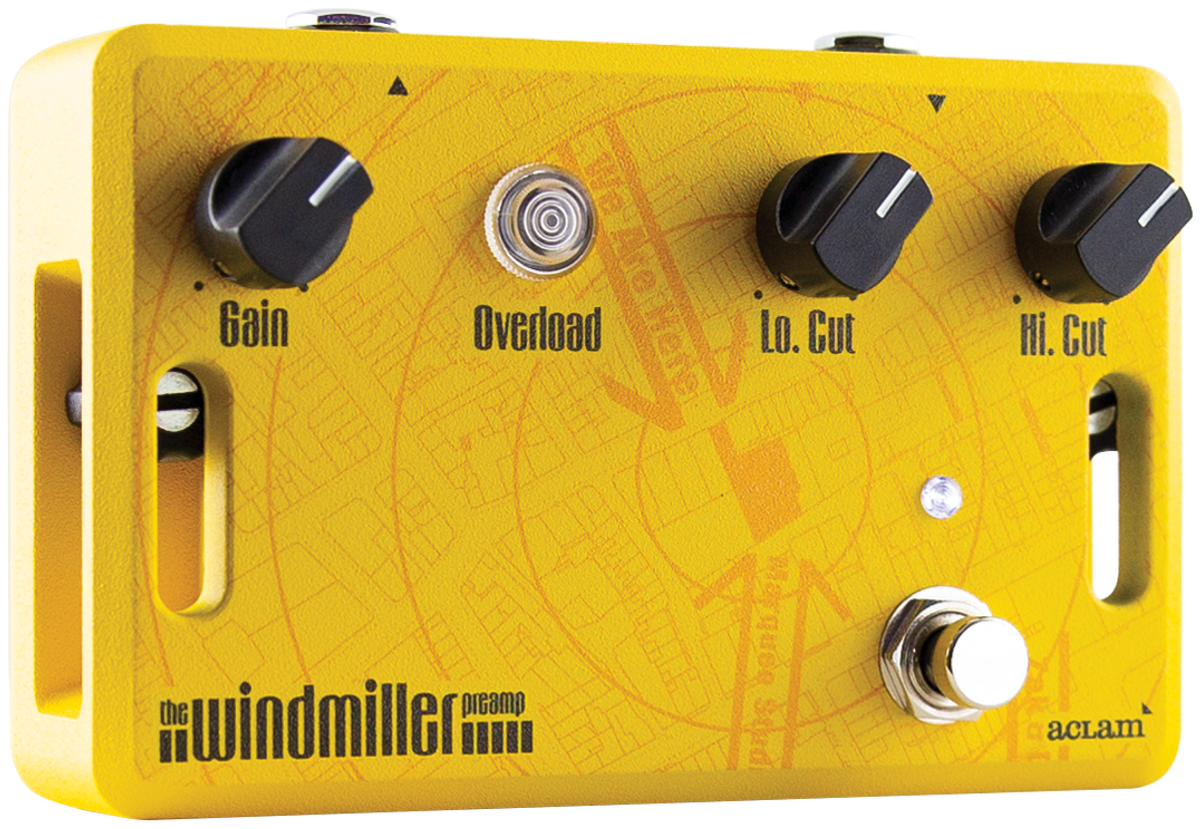 Expensive for a preamp pedal.

I studied Pete Townshend's '60 rigs religiously as a kid—watching The Kids Are Alright on repeat and ogling the photos in Richard Barnes' essential Maximum R&B book. But I don't think it was until I encountered the excellent thewho.net web site that I learned about the Grampian reverb preamp that Pete used to drive his mid-'60s amps to extra-aggro heights. So, I was psyched to hear that Barcelona's Aclam pedals (who already won me over with their fantastic Vox UL730-inspired pedal, the Dr. Robert, and clearly share my circa-'66 guitar production fixations) recreated the preamp section of the Grampian reverb in a pedal.

Just as with the Dr. Robert, Aclam delivers something special and carefully conceived in the Windmiller. They took care to match the critical low input impedance of the original Grampian unit and reproduced much of its topology. But they also added flexible EQ controls so it can be matched to guitar/amp combinations other than Townshend's tone recipes. The results are often much more complex than a basic boost or overdrive.

For all segments the Aclam is set with the low cut knob at near-zero, and the high cut at 10 o'clock. This setting splits the high-cut difference between what Aclam calls the vintage Grampian preamp setting and their prescribed optimum single coil setting.

I'm generally skeptical of claims about magic formulas in preamp and boost pedals. They're essentially simple—and often very similar—circuits. But playing the Windmiller alongside a bunch of overdrives, boosts, and preamp pedals reveals a unique responsiveness and palette of sounds.

Certainly, the Windmiller's low impedance input affects the way the pedal colors and responds to your guitar signal. What's remarkable is how that tone shift—scooped, substantial, and smooth—doesn't overpower your instrument. That doesn't mean the Aclam is "transparent": As you advance the gain, the Windmiller adds distinct compression that players accustomed to aggressive midrange bumps might find soft and squishy around the edges. But I love the way the Windmiller's harmonic profile excites a guitar's top end without making it brittle.

The Windmiller lets a guitar breathe in a lovely way too. A very nice Klon-style pedal sounded boxy and claustrophobic by comparison, and a favored germanium boost sounded a bit narrow and harmonically constrained in relation to the Windmiller's open, airy tones. I got the best approximation of the Windmiller's basic preamp tone from a relatively inexpensive Echoplex EP-3 preamp clone pedal. But the EP-3­-style stomp still sounded thinner, sucked more tone from my guitar and amp, and lacked the Windmiller's EQ fine-tuning potential.

I love the way the Windmiller's harmonic profile excites a guitar's top end without making it brittle.

For many players, the Windmiller's open, airy qualities won't be an advantage. A lot of guitarists like their overdrive or boost pedals to have an intense midrange focus that makes a solo pop. Sometimes I'm one of these players. But in general, I'm happier when I can hear a wider range of overtones from an overdriven signal. The Windmiller excels at this task, making chords and leads that incorporate ringing open strings sound thrillingly alive.

The Windmiller is expensive for a preamp pedal at $310. For players that like the midrange-y profile of more conventional boosts or overdrives, that price might seem dear. But I struggled to find a boost, preamp, amp-in-a-box, or overdrive in my collection that sounded as lively, unconfined, and open-ended as the Windmiller. The EQ is super effective for adapting the pedal to humbuckers or more midrange-y amplifiers. It sounds fantastic as a transparent boost at the end of a signal chain and adds killer compressed textures when situated before fuzzes. It's also very substantial and well made.

The unique textures and responsiveness won't suit every style and rig. And if you can try one with your own rig before you buy, I'd recommend it. Even with my strong mid-'60s tone proclivities, I found the Windmiller an exceptionally utilitarian and adaptable way to add gain, body, and excitement to my signal in many musical settings.

From Your Site Articles
Related Articles Around the Web
aclam