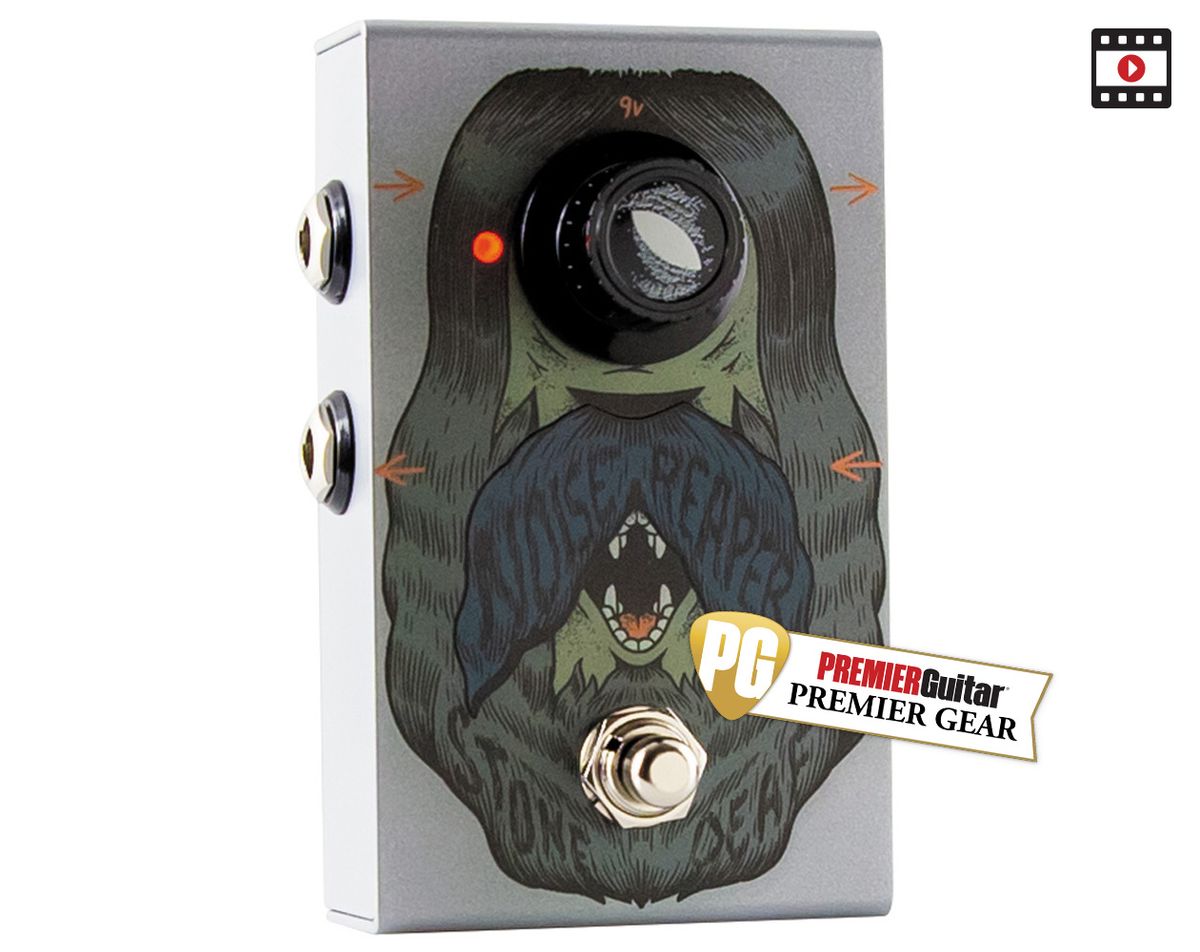 Though they’re probably best known for their debut pedal, the PDF-1 (famously used by both Josh Homme and Troy Van Leeuwen of Queens of the Stone Age), U.K.-based Stone Deaf is a pretty inventive builder. Their product line also includes tremolo, delay, and filtered fuzz pedals—most of which generate racket and texture way beyond their most basic functions. But Stone Deaf’s most recent offering, the Noise Reaper noise gate, is not designed to amp up the noise, but to ratchet noise down.

The Noise Reaper is derived, to some extent, from the noise-abating circuitry in Stone Deaf’s high-gain Warp Drive and Fig Fumb distortions. It works by “reading” the signal from the guitar input before it hits any noise-inducing pedals or amp, comparing that signal sensitivity with the noise-bearing signal in the loop, and clamping down on the latter in response, all while preserving a measure of sustain and dynamics in the process.

On the One
The sturdy little 4.25" x 2.65" x 1.25" aluminum enclosure is built around a high-quality, low-noise voltage controlled amplifier and features a single threshold control with which you set the sensitivity of the gate. The bypass switch is a soft-relay type and power is delivered by a conventional 9V DC center-negative input on the crown.

You can very easily just insert the Noise Reaper in your effects line by routing the pedals via the Reaper’s loop. But it can also be operated by sending the Reaper through your amp’s effects loop to eliminate amp hiss and feedback. (A third possible method for crushing noise at the amplifier preamp and in the pedal chain can be achieved by using a second Noise Reaper pedal, but for the purposes of this review—and in the interest of economy—we will focus on the one-pedal solution.)

The presence of the Reaper didn’t impede dynamics or squelch the feedback I like to get from sustained notes.

Shut Up!
I tested the Reaper both in front and in the loop of a Marshall-style Friedman Small Box head with a 2x12 cab, using P-90s and single-coil Rowe/DeArmond gold-foil-equipped guitars, as well as a JHS Angry Charlie overdrive and a Blackout Effectors Musket fuzz.

Routing the rig via the Stone Deaf’s pedal mode (where effects are looped back through the Reaper’s loop), I got impressive results with very little effort. I love the sound of the Amalfitano P-90s in my Novo Serus J, but those P-90s can be noisy at the best of times. Add the Musket fuzz with the gain cranked to the mix and they can be real trouble. But with the Noise Reaper engaged, my rig was practically silent. The presence of the Reaper didn’t impede dynamics or squelch the feedback I like to get from sustained notes, either. And I got so used to the quiet with the Reaper engaged that when I took it out of the mix the massive hum was alarming.

With the Reaper routed through the amp’s effects loop (and the two dirt pedals still between the Reaper and amp input), the Noise Reaper was also extremely effective. It ably removed P-90 hum in clean settings and subtracted hum from the amp’s lead channel at high gain, as well as the noise from the fuzz and overdrive pedals. Used in this fashion, you still hear a little noise from the amp’s front end, but the relative quiet remains very pronounced

As with any noise gate, there are ultimately limits to what the Noise Reaper can do without affecting dynamics to some degree. You’ll need to set your threshold carefully or the tail of decaying notes—even when completely clean—might start to sputter a bit. And if you need to generate swelling feedback without first hitting a note or chord, you’ll need to switch the Reaper off to get there. But the single-knob function makes such adjustments a doddle.

The Verdict
If you need a noise gate, the Noise Reaper is a pedal you should really consider. I found no significant drawbacks in sound or function apart from the inherent limitations that a noise gate creates in trade for killing hum and screech. It’s a creative and well-built twist on the noise gate concept and stands out for both its simplicity and its versatile routing capabilities.

Check out our video demo: