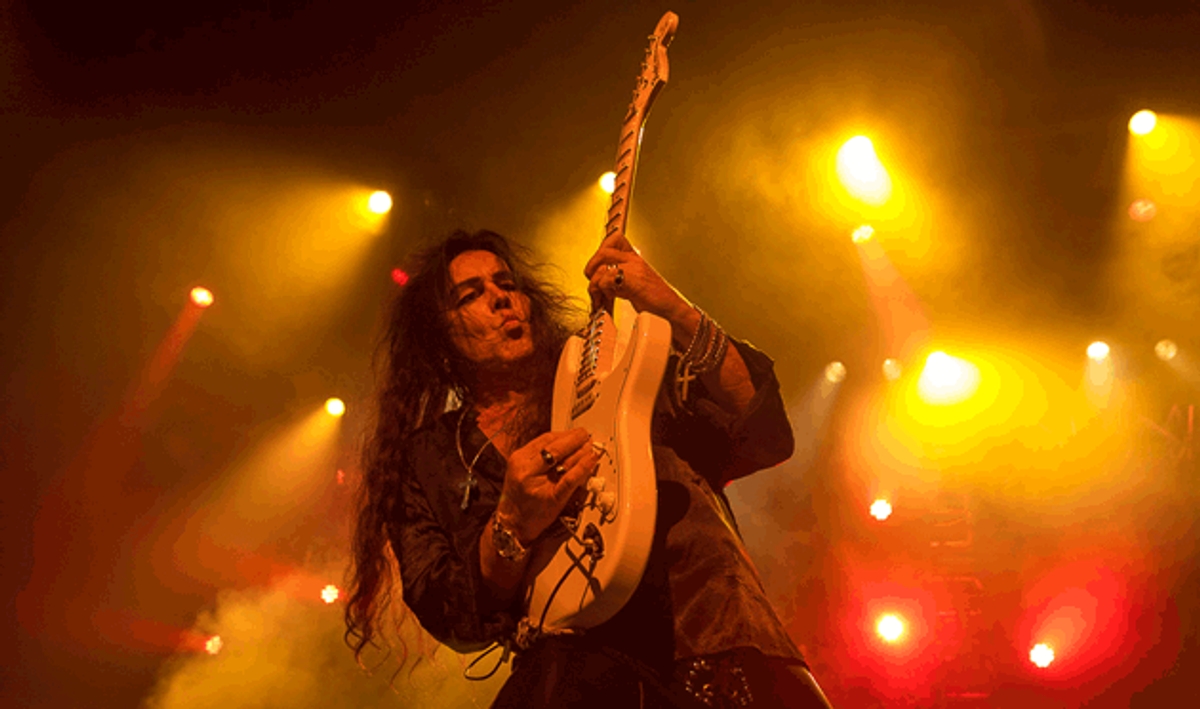 So how exactly does the undisputed king of neo-classical shred do his thing? It’s mostly a combination of magic, dragons, and some hellacious picking.

A household name in the guitar and metal community, Yngwie Malmsteen is known for his stunning technique, incredible vibrato, stage presence, love of Ferraris, and of course, popularizing the neo-classical shred side of hard rock and metal. I’m a big fan of Yngwie and am honored to bring you this lesson on his highly influential 1986 album, Trilogy. This was Yngwie’s third solo album and featured some truly epic artwork of Yngwie fighting a three-headed dragon on a mountaintop with his Strat.

Trilogyfeatures some of Yngwie’s finest work and showcases many different sides and moods. For this lesson, I’ve prepared a piece of music to illustrate a few of the ideas and approaches Yngwie uses on the album. I’ll break down the example into two main parts. Heads up: Yngwie often tunes his guitars down a half-step. For these examples, I kept everything in standard tuning. Let’s unleash the fury.

A note on gear: For these tracks, I used my Eternal S-Type guitar that features single-coil pickups, 21 frets, and a rosewood neck—the closest in my collection to what Yngwie played on the record. The rhythm and lead tones are basically the same, except with more gain and ambience for the lead tone. I used Positive Grid’s BIAS FX plug-in to create my tones, which are based on what I’ve researched about Yngwie’s gear over the years.

Specifically, I used an emulation of a plexi head going into a 4x12 T-75 cabinet with the gain fully cranked. This virtual cab is miked up with an SM57-style mic placed halfway between the speaker’s edge and cone. I also moved the mic back a little to let the tone bloom out of the speaker. In front of the amp I used a Boss DS-1-sytle distortion going into an emulation of an MXR Dyna Comp. For the added gain, I used a treble booster in front of the DS-1—this adds more percussiveness and bite to the single-coils. After the amp I used a subtle room reverb to recreate the classic woody tone from Yngwie’s early recordings. For the lead part, I added a fairly substantial hall reverb and tape echo to impart serious ambience. I used the same setup for the rhythm part but removed the treble booster and echo. I kept the reverb but dialed it back for a little more definition.

One of the most important aspects of Yngwie’s sound comes from his technique and hands. Though many guitarists associate Yngwie with strict alternate picking, this is not the case! To execute his seemingly effortless lines, he’ll often combine legato technique with some other economy-based picking movements. In the lead guitar transcription for this lesson (Ex. 1), I’ve indicated how I mingled alternate picking with fretting-hand legato to produce the companion audio track. As Yngwie has shown us, this mix of techniques lets you create smooth runs that cascade, twist, and turn with virtuosic intensity.

Most of this solo is loosely based around E Aeolian (E–F#–G–A–B–C–D). However, we change the key center slightly when the rhythm section implies a B7 tonality. (Simply changing the D to a D# gives us both a B7 arpeggio and an E harmonic minor scale.)This fits our dominant tonality like a glove and doesn’t stray too far away from our original key. Now this all sounds very technical, but because these scales create the signature sound of Yngwie’s neo-classical stylings, it’s important to focus on such details.

This solo opens up with some classic three-string sweep-picking shapes that outline various inversions of an E minor (E–G–B) triad. I’m using some light palm-muting throughout and concentrating on making sure the notes sound as smooth as possible without losing attack and rhythmic clarity.

The previous sweep-picking flurry ends with a sustained note on the 5 (B) of our underlying E minor key center. The note is held, then attacked again with as wide and controlled a vibrato as possible before launching into one of our first pedal-point picking lines. This short phrase pedals off of E and starts by descending from the 6 of our scale (C) and finally landing on a D# on the 3rd string. This implies our harmonic minor tonality that’s about to become B Phrygian dominant (B–C–D#–E–F#–G–A) in the next measure. I have deliberately chosen to use the 3rd string as I can get wider vibrato on that note with my third finger. It also sets me up for the next descending picking line.

By measure nine of the actual solo, we’re starting to move back toward a Phrygian dominant sound through a series of descending triplets. The pattern shifts on the 1st and 3rd beat of each measure. When practicing this, be sure to use alternate picking and focus on the first downstroke of each group of six notes. This will help you nail the pattern and move smoothly through the position shifts at higher speeds.

Things slow down—somewhat—during this next section that’s based around an eighth-note line. I added some palm muting here and created a sequence based around B Phrygian dominant. Be sure to “open up” on the palm muting to create that rising dynamic feel.

Another pedal-point lick pops up in measure 17 of the solo. This phrase is similar to the phrase in measures 7 and 8, except this time we move around a little more. To ensure the position shifts remain clean and precise at higher speeds, be sure to focus on the first note of each phrase. The solo starts to climax around measure 20 with some fast trills that move into a harmonized bending phrase that ascends on the 3rd string before hitting a bend on the 2nd string.

The ending phrase is similar to the one we tackled in measure 11. Here, we descend through an E harmonic minor scale before ripping out a two-octave E minor arpeggio.

The underlying rhythm guitar parts (Ex. 2) mostly consist of root notes of each chord (E5, B5) played as eighth-notes. Yngwie would sometimes insert scale-based flurries into his rhythm parts using diatonic notes. (Listen to Paul Gilbert’s work in Racer X to appreciate how Yngwie has influenced this kind of riff writing.) Play these flurries of notes in the rhythm part with alternate picking to keep their articulation super-clear and tight with the bass guitar. As always, start slow and then build up speed once you’re familiar with where your fingers have to go.