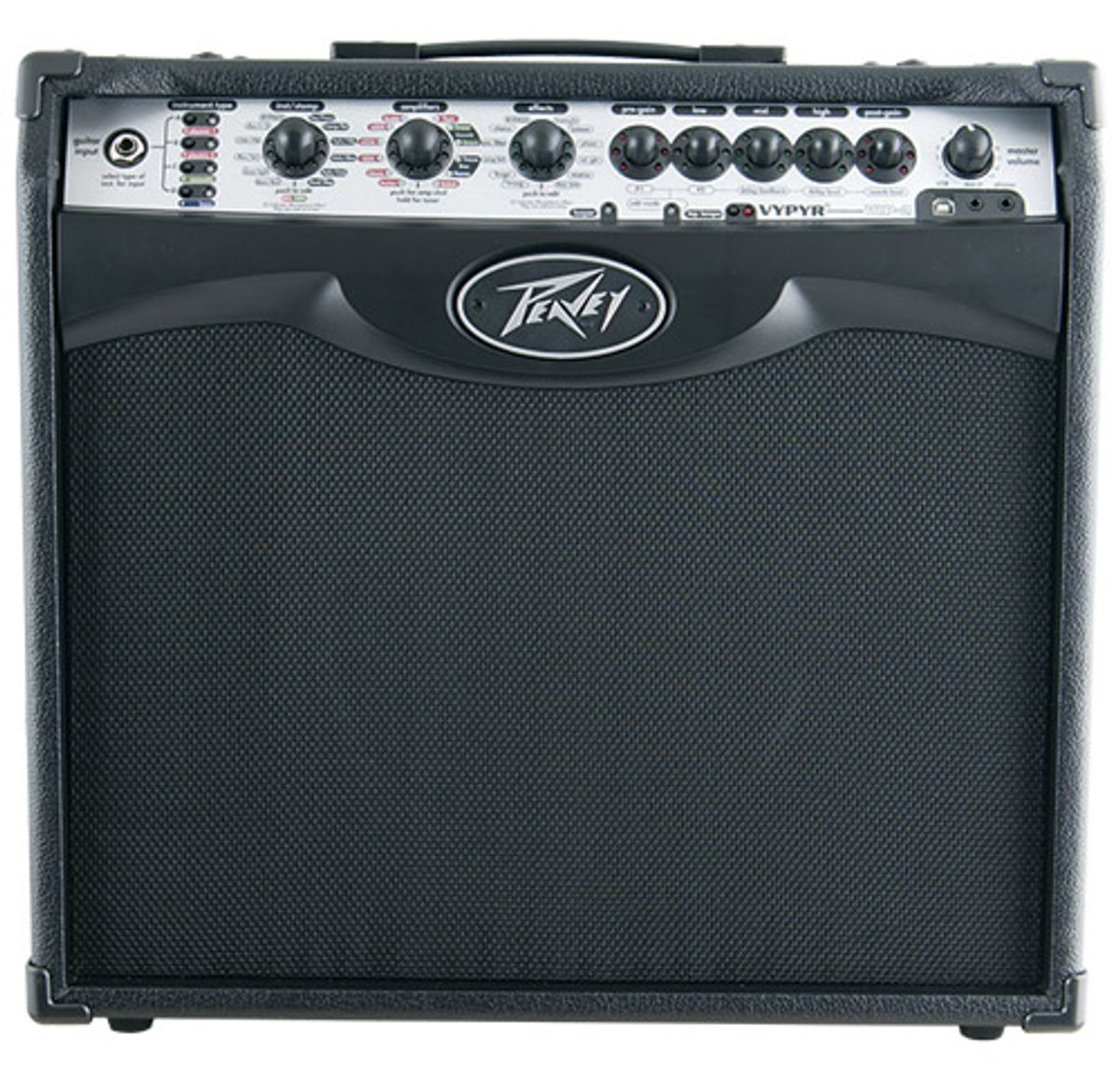 This latest iteration of the Vypyr line of amps is designed and built to handle electric 6-string, acoustic, and bass guitars.

Hartley Peavey’s now-global business began a lot like many other musical instrument companies that got rolling in the late ’60s and ’70s—a musician with a soldering iron and a knack for electronics applied both to the nascent art of rock ’n’ roll. Unlike a lot of those companies, however, Peavey has always remained steadfastly independent, and even over decades of massive growth, Peavey maintained a focus on affordability while delivering the features and flexibility of more expensive gear. While Peavey has dabbled in many facets of the sound and instrument business over the years (their PA systems are ubiquitous in nightclubs, theaters, airports, and even the U.S. Capitol Building), the company’s bread and butter remains amplifiers. One of the most famous—and desirable—is the ’70s Classic 30, a 30-watt combo amp with a distinctive, bluesy, classic-rock tone derived from a solid-state preamp and 6L6GC power tubes (the current production Classic 30 is all-tube). This amp garnered a following among gigging guitarists and the amp-mod community, which constantly tinkers with the Classic 30’s tone.

Fast-forward to 2008, when Peavey released cutting-edge modeling software called ReValver mkIII, which let users modify tones not just by tweaking knobs, but also by changing the virtual circuitry of the amp model. The following year, the company introduced the first series of Vypyr amplifiers, which were based on the company’s new TransTube modeling technology. The goal of TransTube, like many other modeling technologies, was to create tube-like tone with natural compression in the power amp, a wide dynamic range, and tube-amp grit.

Now, Peavey has unveiled a second version of the Vypyr line, the VIP series, as well as an optional pair of foot controllers, dubbed Sanpera I and II. VIP stands for Variable Instrument Performance, and it means this latest iteration of the Vypyr line of amps is designed and built to handle electric 6-string, acoustic, and bass guitars. And after plugging in your weapon of choice, you can simply select guitar, bass, or acoustic settings, and the Vypyr will reconfigure and optimize its performance for that instrument. The onboard modeling engine also includes amps that are tweaked specifically for acoustic guitar and bass.

An Amp for Every Season
The Vypyr VIP 2 reviewed here is a member of a three-amp family that includes the VIP 1, VIP 2, and VIP 3 (rated at 20, 40, and 100 watts, respectively). These amps are designed to accommodate stages and studios of every size. Both the VIP 2 and 3 have a 12" speaker while the VIP 1 sports an 8" driver. The cabinet for each model in the series has a ported, semi-closed back designed to extend the low-end range.

The controls on the back of the amp are basic and simple—just power input, on/off switch, and the Sanpera’s combined data and power MIDI connection. At power up, the LED window on the Sanpera greets you with “Plug in, tune up and rock out!” You’re also treated to a dazzling lightshow from the—no kidding—78 LEDs on the amp’s front control panel. That number of LEDs may seem a bit excessive, but on this amp they are essential for navigating to the effects, amp models, and other features, and selecting and modifying the amp’s sounds. Essentially there’s no menu system to navigate on the Vypyr. That’s a big plus for musicians who favor a simpler control layout.

A Trip to the Tone Library
I first explored the Vypyr using a Fender Stratocaster plugged directly into the amp. I pressed the electric guitar button, and spun the amplifier knob to classic (an emulation of the modern all-tube Peavey Classic mentioned earlier). Each electric guitar amp model on the Vypyr has three virtual channels, clean, crunch, and lead. These channels are accessed by pressing the amp selection knob and are indicated by a change in the LED color from green, to orange, to red—so far, so easy.

The Vypyr’s TransTube engine pretty easily belted out solid approximations of the Classic’s tone. There was sparkle to spare in clean mode and a very tube-like sense of pick dynamics, and the amp was very responsive to pickup changes. Its dynamic range is obviously not as pronounced as what you’d hear from a handwired, all-tube combo amp, but at $200, it’s impressive and fairly natural. Each of the Vypyr’s amp channels offers adjustment to the pre-gain, lows, mids, highs, and post-gain settings. And turning up the pre-gain on the Classic’s clean setting produces an articulate overdrive tone with plenty of spank and range for picking nuance. The Classic’s crunch channel can sound a bit harsh with bright single-coils, but dialing back the treble controls on my instrument took care of the harshest overtones and helped give the amp a gritty, sustain- and harmonic-rich distortion.

The original Peavey Classic was never intended to be a big crunchy rock ’n’ roll amp, but the Peavey 6505, which was inspired by Eddie Van Halen’s 5150 signature model, excels at these heavy tones and it’s the foundation for the 6505 model on the Vypyr 2. The 6505 model matched up well with my Gibson SG’s humbuckers and the sound was bubbly, blistering, and retained dynamic response when you rolled back the pre-gain. And like most of the other models on the Vypyr 2, the 6505 responds much like a tube amp when you roll back your instrument’s volume control.

Essentially there’s no menu system to navigate on the Vypyr. That’s a big plus for musicians who favor a simpler control layout.

The Teachings of Budda
Peavey aligned with boutique amp company Budda in 2008, and the insights they gained are apparent even in the Budda model included in the Vypyr. The Budda setting packs a big low-mid punch, making it excellent for in-your-face blues soloing, as well as intricate jazz noodling. This Budda model was my favorite amp model on the Vypyr, due in large part to the dynamic range and full-bodied tone. A lot of modeling software tends to struggle with those two very important characteristics, but the Vypyr 2 nails it here in a manner that belies the amp’s price.

Modeling software brings enormous versatility, and it can be a challenge to make an amp simple to operate. One of the most important breakthroughs with the Vypyr VIP series is the incredibly intuitive control layout. When I bought my first smartphone, an Apple iPhone 4, I was surprised to find no included user manual. With the Vypyr VIP 2, it feels like Peavey took a page from Steve Jobs’ book of minimalism and intuitive operation when they designed the front panel. Your instrument selection determines the amp model selection, which is tweaked with a few tone adjustments (they typically sound great all at noon), and you select your effects by spinning a few lighted rotary knobs. The tuner, effects editing, and basic mixing control are all available within a push and a spin of those same rotary knobs.

Cons: Feedback can be a problem at high gain or volume (there’s no noise gate). Lacks the lows you’d expect from an amp marketed for bass.

Effects Aplenty
In addition to the well-executed standard effects like phaser, flange, reverb, delay, octaver, tremolo, chorus, and envelope filter, there are also some off-the-wall effects. Synth mode turns your guitar into a cheesy-sounding lead synth, but it tracks the instrument’s pitch exceptionally well. You can also make your electric guitar sound like an acoustic, a 12-string, a 7-string, a sitar, or a bowed violin-like instrument. These models can all be combined with each of the amp models, as well as the previously mentioned effects.

Sanpera—Far Beyond Steppin’
With the accompanying Sanpera foot controller you can access a looper setting. What’s really cool about a looper effect with a multi-instrument modeling amp is that you can lay down a bass line with a bass amp model, and then perform guitar solos over that with a guitar amp model. The Sanpera’s II dual expression pedals are assignable, so you can use them for wah-wah and volume effects, but also for controlling parameters such as the speed of a tremolo effect. The numerous stomp switches let you toggle effects in your virtual effects chain like you would on a typical pedalboard.

The Verdict
If asked what I would expect to pay for something like the Vypyr VIP 2, my honest guess would be about 400 bucks. So I was pleasantly surprised to find the street price was half that. As a guitar amp alone, this device has a ton of value. It’s versatile, the models are convincing, the controls are intuitive, and the lightweight chassis makes it a good practice amp or small stage combo. The additional bass and acoustic inputs, as well as their accompanying amp models, make the VIP 2 even more versatile to anyone who likes to practice and write with more than just a 6-string electric. If you’re looking for a fun and simple modeling amp with easy controls and a wealth of effects at an insanely nice price, I’d strongly suggest taking Peavey’s new Vypyr VIP series for a spin.