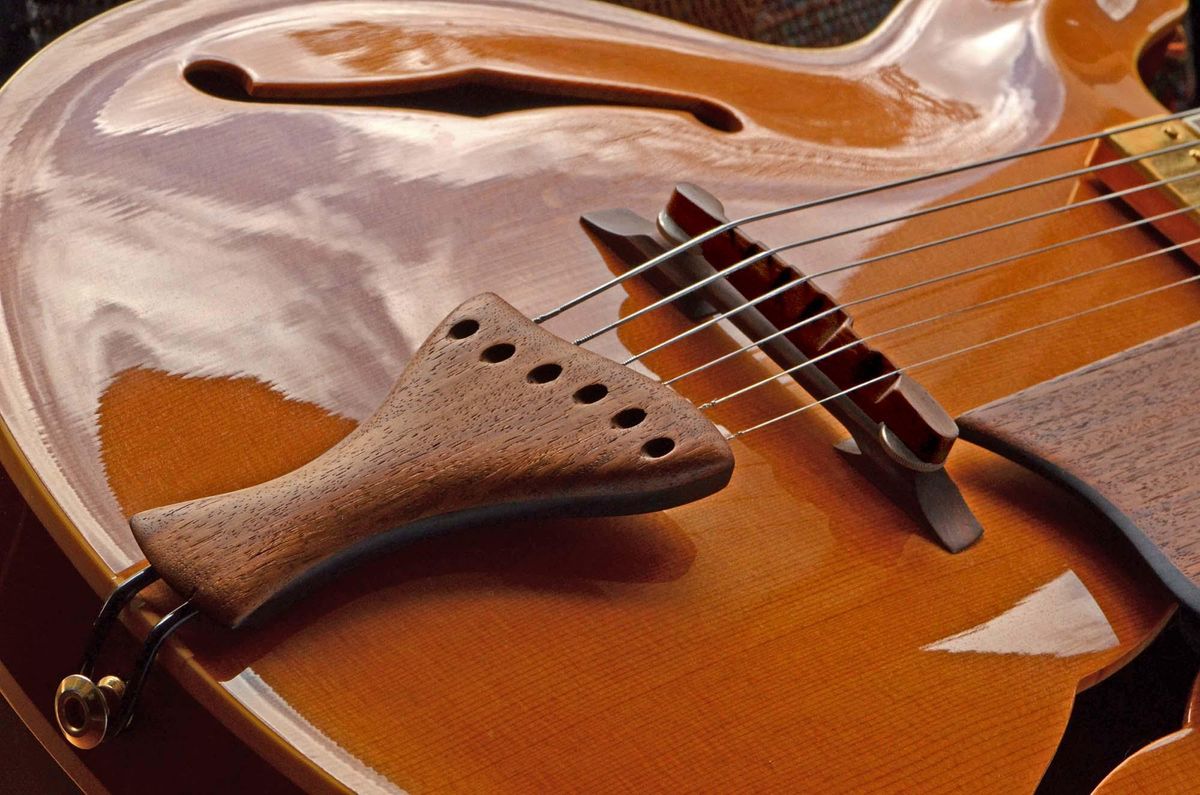 Instrument makers have always tried to manipulate string length to optimize tone and feel, but how much is myth and how much is science?

In a previous column, I investigated the relationship between overall string length and its resulting tension ["The Doors of Perception," August 2020]. I cobbled together a crude measuring fixture and determined that the length of string beyond the bridge and nut did not affect a string's (linear) tension at a given pitch. After being assailed with comments and emails loaded with physics lessons detailing the math behind my conclusion, I now know that it was folly to assume any other conclusion. The laws of physics state that string tension is determined completely by the active (vibrating) length of the string, the pitch the string is tuned to, and the string's mass. In simple terms, this means that for a given vibrating length, the tighter you pull the string or the heavier the gauge, the more tension it will have. Nothing else, like peghead length or tailpiece position, matters—full stop. Still, the feeling persisted that I could sense a difference on instruments with long lengths of string between the bridge and tailpiece, such as an archtop jazz guitar. I'm not alone.

There have been many seasoned musicians I've known who swear that a flipped 6-in-line headstock tightens up the low strings. They've reported that the strings were tougher to bend and felt stiff. Some of the string manufacturers I spoke to in my research, despite their knowledge of the science behind the materials and construction of guitar strings, offered that there might be a perceived difference. But how could this be? You'd think that if you feel tension, it could be measured, yet my test instrument showed no change. Could there be another force at work, like lateral resistance? It seemed impossible, but it was time to resurrect the string tension fixture to find out.

My string test contraption was originally built to measure the linear tension of strings, but I only had to make a few changes to convert it to quantify lateral resistance. Admittedly, human fingers can detect minuscule changes in pressure, so I wondered if my 20-pound test instrument would have the resolution to pick up any variation. My theory was that if the overall length of a string was longer, there might be a perceivable difference in the force needed to stretch a string to a given interval. I'm counting on the physics majors out there to rush in at this point with the equation that I'm oblivious to.

Perhaps the friction (or lack of same) at the nut and bridge is what we are feeling when a guitar feels easy to play, or, conversely, when we say it fights us.

Nevertheless, my method was to use a pair of .012 plain steel strings and bend them the distance needed to raise the pitch one full step. Each string would have a different overall length despite their identical vibrating length. The full-step bend at the 8th fret position is a lick that all (non-classical) guitarists employ regularly. It's also the figure we often use subconsciously to determine playability when evaluating a guitar. I used this exact move in an attempt to impress Joe Bonamassa while sampling one of his '59 sunbursts. He avoided eye contact.

In my initial tests, I observed that it required a force of 1.8 pounds to raise the pitch one full step, regardless of the total length of the string, as long as the vibrating length remained 25.5". Thinking that perhaps the string's light gauge made any difference too small to measure accurately, I repeated the experiment with a .056 low E string. My test replicated bending the same B note three frets (a step-and-a-half) sharp to D. This is a pretty bold move on a guitar, but I thought maybe I'd see some evidence of difference if I really strangled it. Again, no difference was indicated, as both examples required 4 pounds of pressure to reach the higher note.

Now, I'm sure many of you will be quick to point out that this was a pretty shoddy exercise. I didn't make absolutely certain that the friction at the nut would be equal when extending the length to the tuner. Friction is a factor often brought up when this subject is discussed. Should I have used a ball-bearing roller at the nut? Perhaps the friction (or lack of same) at the nut and bridge is what we're feeling when a guitar feels easy to play, or, conversely, when we say it fights us. What about those players who have that little quivery vibrato that sounds like Joan Baez? Do they feel these forces? As for my research, at this point I was beginning to tire and made myself an espresso.

I'm hopeful someone smarter than me will figure this out and make a YouTube rebuttal. Meanwhile, I'm planning my next test to see if longer scale length is why Eric Clapton "lost" his tone after Cream. Until then, rock on friends!

From Your Site Articles
Related Articles Around the Web
esoterica-electrica