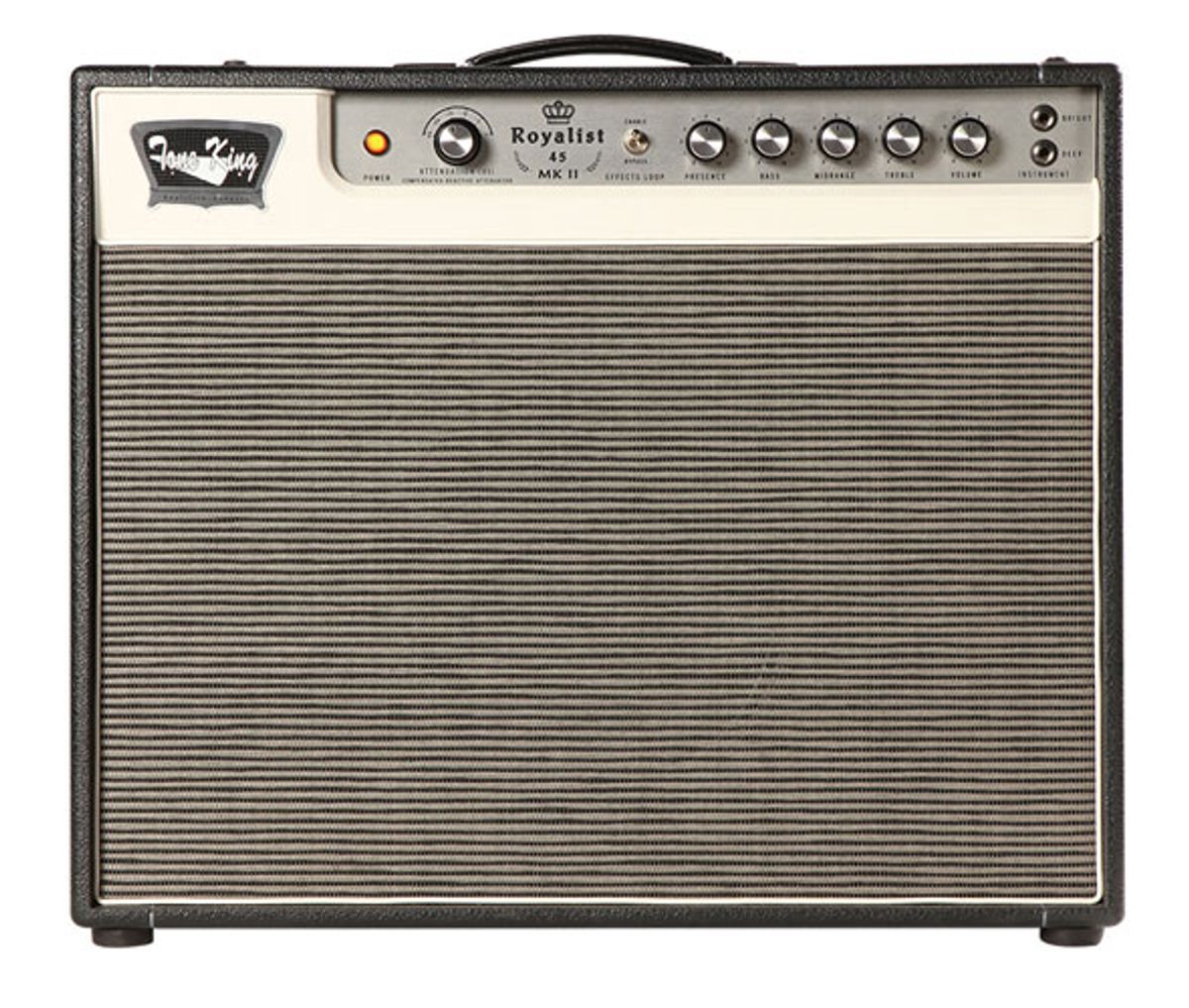 The Royalist II MK offers two important updates over its predecessor: an integrated Ironman II Compensated Reactive attenuator, and dual instrument inputs, each with its own unique voicing.

The MK II features a single channel preamp and an all-tube signal path with three 12AX7A preamp tubes and two EL34 output tubes. However, the amp will also accept both 6L6GC tubes and some KT66 tubes for tonal variety. Biasing and screen voltage calibration can be performed quickly and easily with back-panel test points and adjustment trimmers.

In addition to the output tubes, the MK II utilizes one 6V6GT screen regulator tube – a unique design feature not found on other amps of this type. The 6V6GT offers the advantage of a precisely calibrated dynamic response – not too stiff, not too loose – and virtually no sag in the attack whatsoever. The result is a big sound with more usable headroom, while maintaining the perfect “feel” at any volume or gain level.

The MK II is offered as either a 1x12 Combo (pictured left), or as a Head with 2x12 Extension Cabinet (below right). Both are precisely tuned to capture the tonal qualities of the iconic late ’60s basketweave 4x12.

The Royalist 45 MK II is a nonmaster volume amp, and when pushed into distortion at full output power, it delivers the complex harmonic spectrum which can only be obtained from a precise mix of preamp overdrive and power tube distortion.

This combination is the key to the authentic tone and feel of a vintage British amplifier. It’s also normally a source of difficulty in controlling the amplifier’s volume, a problem that’s solved by the integrated Ironman II attenuator.

The Ironman II features a tuned reactive load and special compensation circuitry that preserves the natural sound and feel of the amplifier. The result is a much more transparent attenuation versus a conventional attenuator, allowing the amplifier’s output tubes to run at full output power while delivering only a selected fraction of that power to the speaker.

Additionally, proprietary circuitry compensates for the differences normally found in low volume tone versus high volume. The result is a very natural sounding attenuation with a deep, rich, and present at even the lowest settings.

The Royalist 45 MK II incorporates a series-connected effects loop with Send and Receive jacks on the back panel and a Bypass switch on the front panel. The loop circuitry’s straightforward, minimal-component signal path is entirely tube buffered for exceptionally transparent sound quality.

A 1/4" unbalanced line out jack is provided on the back panel of the amp, with an associated level control. The line out can be used to drive any line level input, such as a recording device or mixing console.

The Ironman II attenuator can also be used to provide a reactive load so that the amp can be used without a speaker connected, for re-amping or silent recording purposes.

The Ironman II Mini solves a common problem experienced by guitarists who play at lower volumes but want the overdrive and distortion tones produced by an amp at full volume.

The stand-alone unit employs Tone King’s state-of-the-art Ironman II architecture, with proprietary design features that make it particularly effective at maintaining the natural sound and tone characteristics of a fully cranked amplifier, even at the lowest volume levels.

The Ironman II Mini’s Tuned Reactive Load mirrors the impedance curve of a real speaker, which results in a more natural tone and feel over the simple resistive load used in most attenuators.

Volume Compensation Circuitry adjusts the tonal balance at each attenuation step to ensure that the sound is always as deep, rich, and present at low volume as it is at high volume. Additionally, Damping Factor Correction Circuitry makes the speaker perform more naturally at low volume so it retains the feel of a cranked amp, even at bedroom volume.

The Attenuation knob selects between 6 available steps, each with three possible attenuation levels, as determined by the Solo button and the Range switch.

The Range switch selects the relative attenuation level when the Solo function is inactive, determining the amount of volume increase when the Solo function is activated. The Solo footswitch selects between two different attenuation levels to provide a volume boost for soloing or other purposes. The Presence switch provides subtle control of brightness and compression for tailoring of the response to match the acoustic environment, and to correct for an overly bright amplifier.

A Line Out Jack offers Re-Amping or D.I. capability while a unique Solo feature provides a selectable 3db/6db volume boost under footswitch control.

The Ironman II Mini is available through Tone King dealers at a retail price of $395.