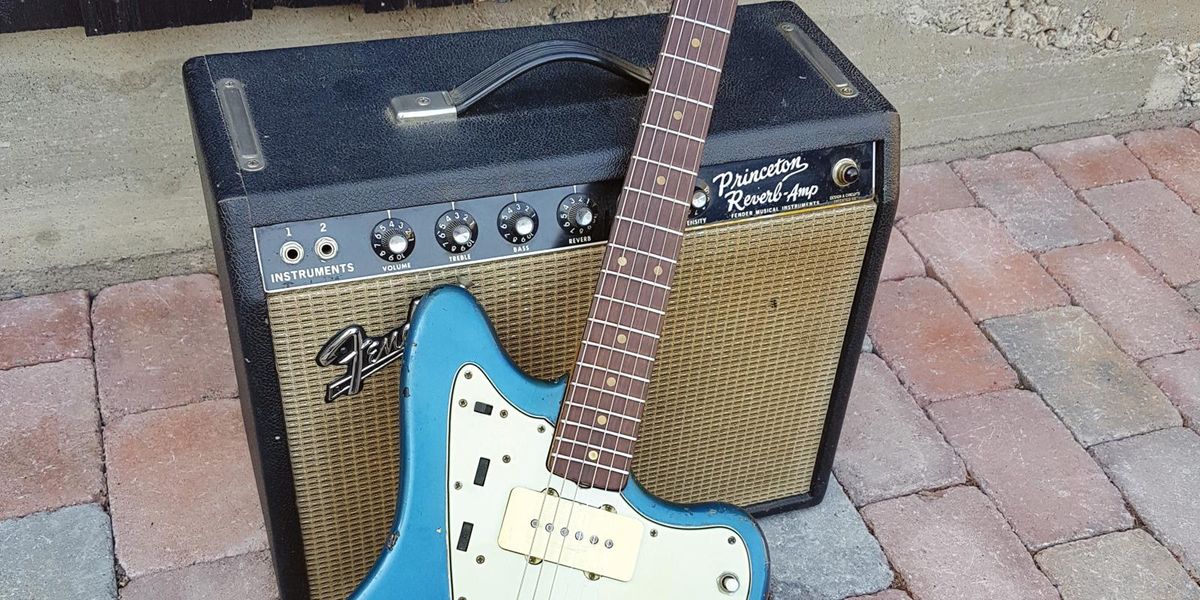 A sublime pairing: a vintage black-panel Princeton Reverb and a Jazzmaster. The amp's debut model year was 1964, six years after this offset guitar debuted at the NAMM show.

Let's take a look under this iconic Fender amp's hood and learn about its tonal quirks, easy mods, and more.

Fender's Princeton Reverb is an iconic tube amp that has been in production for almost 60 years. Intended to be a student and practice amp, the Princeton became widely popular among both professional and amateur players. Its strength lies in its simplicity and light weight, and in this column, I'll share my insights on how to get great tone from this model.

The Princeton was introduced in 1964, in the black-panel era of Fender, as a single-channel combo powered by two 6V6 tubes, producing 12 watts. It came loaded with either a 10" Jensen or Oxford speaker, inside a small 9 1/2"x16"x20" cabinet. The amp weighs only 27 1/2 pounds and can easily be carried in one arm with a guitar case in the other. The controls consist of volume, treble, bass, reverb, and tremolo speed and intensity. Its design changed slightly during the silver-panel era, in 1968, and then remained consistent until 1981, when Paul Rivera came along and introduced the Princeton Reverb II, a great but different amp that was produced until 1986.

Princetons sounded very consistent through the '60s and '70s. In 2008, Fender reissued a printed-circuit-board-based Princeton that also cosmetically and tone-wise stayed close to the original. It, too, became very popular, and in 2013, Fender added a '68 Custom Princeton Reverb with the vintage-correct, transition-era aluminum frame. It has a small twist in the circuit design that sounds wilder, with more break-up, which is not vintage-correct but is popular and relevant.

Since I started watching vintage Fender amp prices around 1998, Princeton Reverbs have cost more than Super Reverbs and Twin Reverbs. The most sought-after '64 to '67 models, with Jensen speakers, often cost $3,500. More affordable push/pull boost models from 1978/'79 go for $700 to $800. If you install a good speaker in a push/pull version, you will almost have a black-panel Princeton Reverb in terms of sound.

Unlike most other Fender amps, the Princeton survived the silver-panel era without major changes.

Now, let's look at the differences and similarities between the Princeton and other vintage dual-channel Fenders from the AB763 circuit family. They all share the same tone stack, preamp design, and use push/pull class-AB power amps with negative feedback. These similarities explain why Fender's black-panel and silver-panel amps sound very much alike. There are some differences, though. For example, the Princeton sounds smoother than the Deluxe Reverb's vibrato channel, because the Princeton does not have the 47 pF bright cap. That allows many players to easily find a sweet tone in the Princeton, which pairs well with various guitars and takes pedals splendidly, too.

Another of the Princeton Reverb's departures from Fender's other AB763 amps is bias-based tremolo, versus optical tremolo. Bias-based tremolo is capable of a deeper sweep, since it almost turns the power tubes off by changing their bias level while in use—but only if the bias is set correctly. A too-hot bias will weaken the tremolo. It's also fun to experiment with the tremolo's character by varying GZ34 or 5U4GB rectifier tubes, or changing out the 6V6 power tubes.

All class-AB amps have phase inverters whose purpose is to duplicate and invert the original signal into two separate signal chains that are fed into each of the two (or four) power tubes. In the Princeton, there's a budget-level phase inverter based on only one-half of a 12AX7 tube, compared to a full-current-strong 12AT7 in other AB763 amps. This results in more phase-inverter distortion—particularly noticeable as loose and farty bass notes. This also explains why the Princeton Reverb has only 12 watts of power compared to the Deluxe Reverb's 22-watt output, although both use 6V6 power tubes. So when the Princeton is cranked, it tends to sound a bit browner than the Deluxe Reverb, with more breakup in the lower frequencies and a mid-focused tone. But at lower, clean volumes it still delivers a more typical scooped AB763 sound.

I like to keep Princetons stock for practice and home use, because I want early break-up. Those who use a Princeton onstage and need more clean headroom may consider installing a 12" speaker. This mod is really simple and there's no need to expand the speaker hole in the baffle. You only need to drill new screw holes and make sure the speaker frame does not collide with the output transformer or reverb tank. Most speakers, except those with the biggest ceramic magnets, like the EVM12L or Eminence Swamp Thang, will fit. Another easy mod is to insert a Deluxe Reverb output transformer. This will firm things up even more. Finally, installing a 25k mid pot (or switch) on the back is a must-have mod for all Fender amps lacking a mid-control pot. That'll fatten this literal lightweight up!