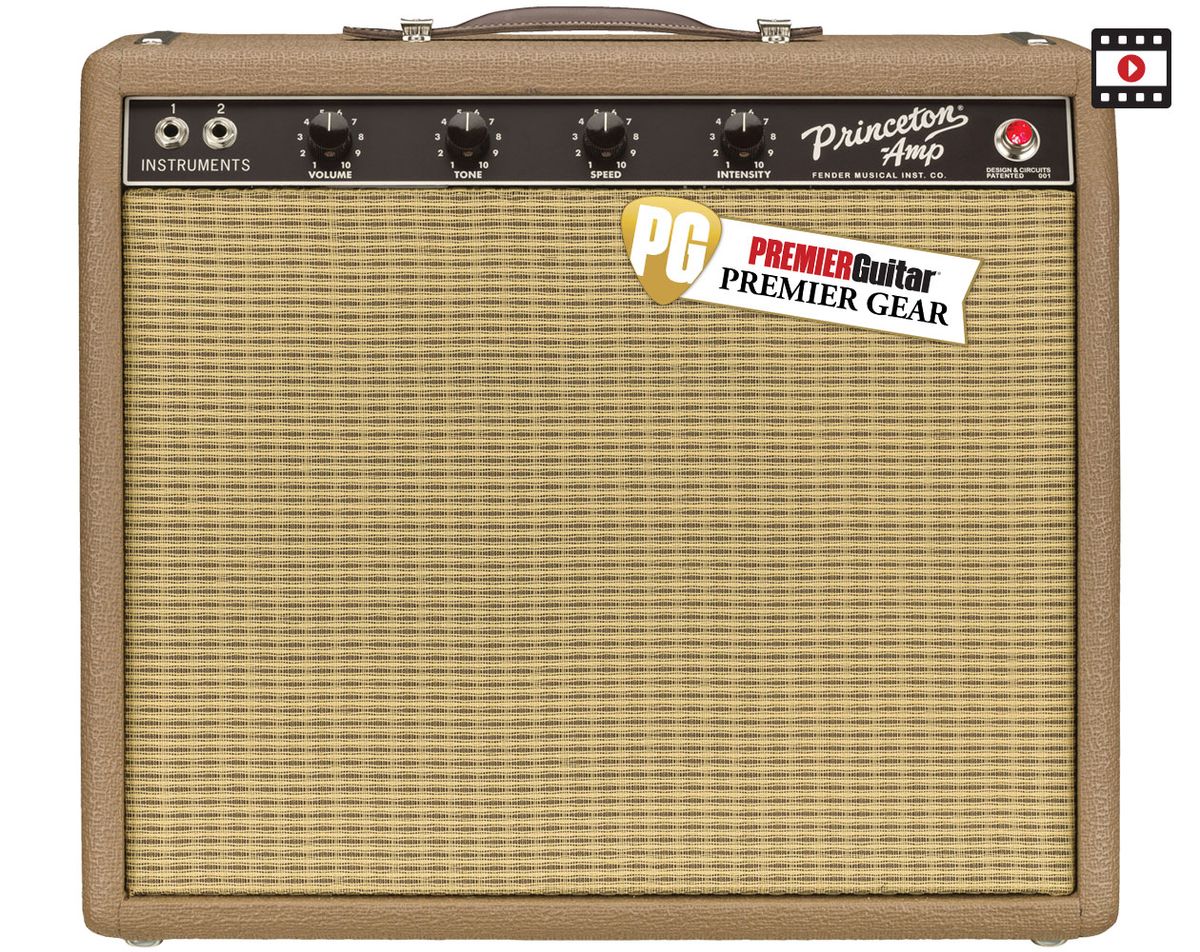 A bigger speaker and a leap back to handwired brownface circuitry make Chris Stapleton’s signature Princeton a sparkling, sophisticated, and bellowing bruiser.


Played using a Fender Telecaster set to the bridge pickup, recorded with a Coles 4038 ribbon mic set 12" in front of the amp, direct to Pro Tools via a Universal Audio Apollo Twin Duo.
The first three passages have the Princeton's volume at 4 and tone at 6 (both out of 10); passage 2 has tremolo speed set to minimum and depth at 6; passage 3 has tremolo speed set to 6 and depth at 5. The final passage has the amp's volume at 7 and tone at 7.

As much as the blackface Fender Princeton and Deluxe Reverb have become studio and club classics, plenty of players recognize the sweetness and magic of their café au lait brownface predecessors. Grammy Award-winning country artist Chris Stapleton is one of them, and his longtime use of a slightly modified, 57-year-old combo has inspired the release of the new Fender ’62 Princeton Chris Stapleton Edition.

With a totally handwired version of the classic 6G2 circuit and a vintage-accurate combo cab, this rendition of the Princeton replaces the original’s single 10" speaker with a beefier 12", which adds up to a surprisingly muscular performer in a relatively dainty package.

Compact Cutie
At a glance, it’s easy to write off the Princeton as the practice and student amp that Fender designed it to be back in 1961. The basic specs don’t dissuade you much from that assumption, either. With an output of 12 watts from two 6V6GT tubes and controls for just volume, tone, and tremolo speed and intensity—all housed in a compact combo cabinet measuring 19"x16"x9.5" and weighing 34 pounds—the Princeton doesn’t look like it’d be up to much other than basement, bedroom, or coffeehouse jams. That’s even with the addition of the 12" Eminence CS speaker with a ceramic magnet. But as many artists have found through the years, the Princeton’s size can be deceptive. Prepare to check your preconceptions at the door.

While many amps of ’61–’63 hinted at the coming blackface models in terms of circuit evolution, the 6G2 Princeton truly marks a point between the smaller tweed combos of the ’50s and the blackface and silverface amps of the mid-to-late ’60s. With a simple front end driven by one 12AX7 preamp tube, a volume and tone control between the first gain stage and a second driver stage, and a cathodyne (aka split-lode) phase inverter that uses half of an additional 12AX7, the brownface Princeton follows the circuit of the legendary 5E3 tweed Deluxe pretty closely right up until the signal hits the output tubes, and we all know what those gnarly little combos can do.

The 6V6GTs in the 6G2 Princeton run at fixed-bias, so there’s a little more firmness in the output stage than is derived from the 5E3 Deluxe’s cathode-biased tubes. As a result, it doesn’t mush out as readily when pushed. The 5Y3 tube rectifier means there’s lots of tactile sensitivity and dynamics, but expect tighter-than-tweed response that accents twangy, chiming, or jazz tones at volume. The remaining half of that second 12AX7, meanwhile, is utilized in a simple tremolo circuit that’s one of the best sounding in an amp of this size. As a bias-modulating circuit acting directly on the output tubes (and selected via the included one-button footswitch), it’s lush, round, and warbly.

The brownface Princeton follows the circuit of the legendary 5E3 tweed Deluxe pretty closely, right up until the signal hits the output tubes, and we all know what those gnarly little combos can do.

Inside the chassis, Fender did a great job of replicating the handwired eyelet-board construction, while including updates necessitated by modern safety standards and production methods. Components, including the Schumacher transformers, are high quality. Outwardly, the ’62 Princeton looks so much like one of the originals—complete with finger-jointed solid-pine cabinet, tan Tolex, wheat grille cloth, ridged brown knobs, a brown control panel, and a leather handle—that you could easily mistake it for a vintage combo, until you looked around back to find 21st-century features like the safety cage around the tubes and a gold Chris Stapleton commemorative plaque.

Brown Sound
Tested with a 1957 Fender Telecaster and a Gibson 1958 Les Paul reissue, the Stapleton Princeton fast reveals itself as a wolf in sheep’s clothing. In short, Fender nailed it with this one. It sounds fantastic at all settings: authentically brownface, but with the fuller voice that a 12" speaker can lend to a circuit.

It excels at crisp cleans that have a little extra grit and edge, compared to similar blackface-inspired combos. That also means juicy edge-of-breakup tones when you push the volume. Set the volume around noon with the Les Paul or 1 o’clock with the Telecaster, and you hear meaty, thick overdrive with clarity and perceptible harmonic bloom on top—a delectable output-stage-type distortion that lacks the thin fizz of many preamp-distortion-generating circuit designs. Add in the tasty tremolo, which is a truly sweet-sounding circuit, and the Stapleton is scrumptiously brimming with tone possibilities.

I’m also doubly impressed at the relative openness of the sounds from this little combo. Many smaller cabs intended for single 10" speakers can sound boxy, nasal, and constricted when stuffed with a larger 12", but there’s none of that here. Note, too, that this a surprisingly loud amp for its size and rating, so you might want to use an output attenuator if you require maxed-out crunch and lead tones at neighbor-friendly (or even smaller club) volumes. That said, it handled a TS9 Tube Screamer and a Bogner Wessex overdrive beautifully during testing, so good sounding overdrive doesn’t have to inevitably summon the noise police.

The Verdict
Brownface combo circuits have been popular among boutique builders recently, but there’s certainly something very time-travel-cool about hearing real brownface tone and experiencing such high quality in an amp with the Fender nameplate on the grille. The ’62 Princeton Chris Stapleton Edition is an impressively proud and punchy little combo, with a bellowing, complex voice and muscularity that belies its size and power rating. And while it might be a bit pricey for its size for some players, there’s little to fault in the execution either inside or out.