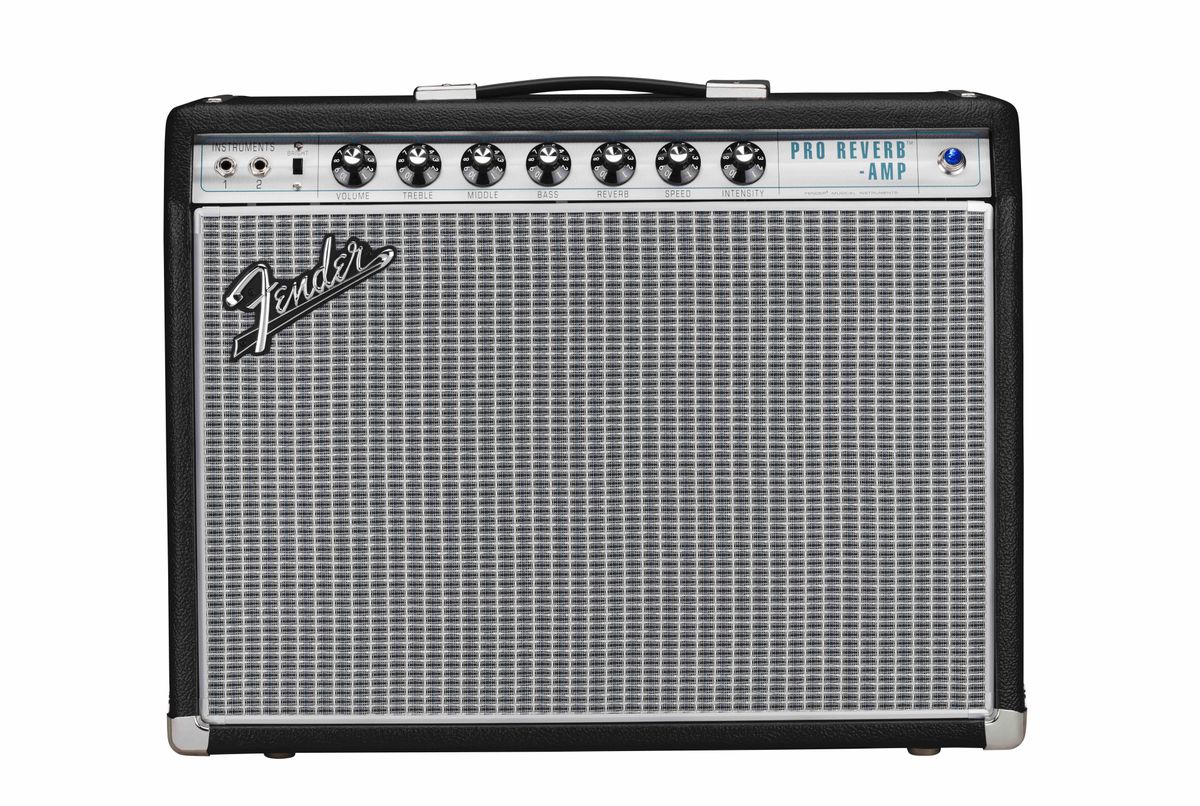 An unsung sleeper from the black- and silver-panel years sees its DNA scrambled to intriguing ends.

Classic cleans and excellent pedal-platform versatility. Nice onboard reverb and tremolo. Light weight for an amp of this size.

Fender's '68 Custom series won plenty of fans by resurrecting the stylish silver-panel amps of the late '60s and '70s and making some of those models into more modern gigging machines. One of the newest additions to the lineup is the '68 Custom Pro Reverb—an evolution of an amp that debuted as a black-panel model in 1965.

The original Pro Reverb is considered a great all-around stage amp, and remains a relative bargain among vintage Fenders. But the reconfigured '68 Custom Pro Reverb both adds and subtracts features to better suit the needs of contemporary players, and there are significant differences between the original Pro and this newest edition. Where the original was a 2-channel 2x12, the new incarnation is a lighter and more compact 1x12, has a single channel, and adds a midrange control. But it's still 40 watts and most of the features remain the same, making it a logical next-step-up from the popular Deluxe Reverb.

Eliminating the underutilized normal channel from the original and adding the handy midrange control still equals a very streamlined control panel: volume, treble, middle, bass, reverb, and tremolo speed and intensity—a combination any Fender fan can love and relate to. The power and standby switches are on the back panel, where you'll also find two jacks for the onboard and extension speakers, and a TRS jack for the included two-button reverb and tremolo switch.

Much like its '60s predecessor, the '68 Custom Pro Reverb generates 40 watts from a pair of 6L6GC output tubes, with three 12AX7s and two 12AT7s in the front end. It lacks the original's tube rectifier—instead using solid-state diodes to convert AC to DC (as many other Fenders were doing in the '60s anyway). Players love tube rectifiers for their saggy, compressed attack, but Fender claims to have made up for the absence of a tube rectifier by using a transformer with higher-than-usual copper resistance, which helps replicate the higher forward impedance—and sag—a rectifier tube would provide.

Although it's compact and relatively light, the Pro Reverb can still be a loud amp.

A more obvious deviation from tradition is the inclusion of a single 12" Celestion Neo Creamback speaker. It's built around a lightweight neodymium magnet rather than a heavier ceramic one, like you'd see in the speakers from a vintage black-panel Pro Reverb. It's a critical part of a slimming effort that, along with a compact 22" x 17" x 9" meranti plywood cabinet, reduces the combo's overall weight to a manageable 35 pounds (originals weighed closer to 53 pounds).

The rugged printed circuit board includes a few thoughtful updates to the original circuit— most notably a reduction in the output stage's negative feedback, which adds a little more touch sensitivity. And the tremolo is tube-driven and grid-biased—borrowed from the vintage Princeton Reverb amp for a warmer throb. Elsewhere things stay close to vintage spec. The reverb is still a classic tube- driven Fender circuit that feeds a long spring pan mounted at the bottom of the cab. The transformers are custom made by Schumacher, which supplied these components to Fender in the '60s. For the most part, the Pro features the same preamp circuit that helped to make black- and silver-panel Fender amps so famously glassy, clear, bright, and slightly scooped sounding.

Given that the '68 Custom Pro doesn't attempt to be a period-correct reissue, it occasionally leaves us wanting for a few additional non-vintage conveniences. A master volume control is almost anathema to this circuit, but some form of output-reduction mode—a half-power switch, an onboard attenuator, or a voltage-reduction circuit—would be useful. Although it's compact and relatively light, the Pro Reverb can still be a loud amp and the inability to crank it up for natural bite and sting at lower decibel levels might limit its appeal to some players.

Whether paired with a Fender Telecaster, a Gibson ES-335, a P-90-driven Novo Serus J, or a variety of overdrive pedals, the '68 Custom Pro Reverb delivers impressive variations of the vintage Fender amp sounds we know and love, and feels very familiar and dynamic in the process.

Players generally covet vintage Fender amps for their stellar cleans and creamy edge-of-breakup sounds. The '68 Custom Pro Reverb delivers on all counts. It's bright and clear without being harsh or brittle, and slightly mellow in the mids without sounding timid. It's a classic tone for anything from pop to country to jazz to blues, and it's an ideal foundation for pedals. Add the sumptuous reverb and tremolo to this palette—both of which impressively emulate their '60s predecessors—and there are many moods to conjure before you even add a stompbox.

Moving the amp from to clean to slightly dirty overdrive—at least with a Telecaster bridge pickup—is the difference of going from 4.5 to 5 on the volume control. Here, the '68 Custom Pro Reverb reveals the more aggressive side of its personality. Breakup is juicy and biting with just enough sag to compress hard pick attack without going mushy. The Pro can get a little raunchy and loose when pushed too far—especially when humbuckers or P-90s are involved. But it's still a delicious sound. (I also easily achieved all of these sounds at lower volume levels using the attenuator in a Mesa CabClone IR+. A similar attenuator might open up many such options).

Fender did a great job re-imagining one of their real unsung '60s combos as an amp that's probably more useful for most modern players than a detail-perfect reissue would have been. It does a great job of capturing those iconic black- and silver-panel tones at an accessible price, all in a lighter, more convenient package. Some form of output reduction would have been a plus, but even as is it represents a formula with a lot of practical appeal.