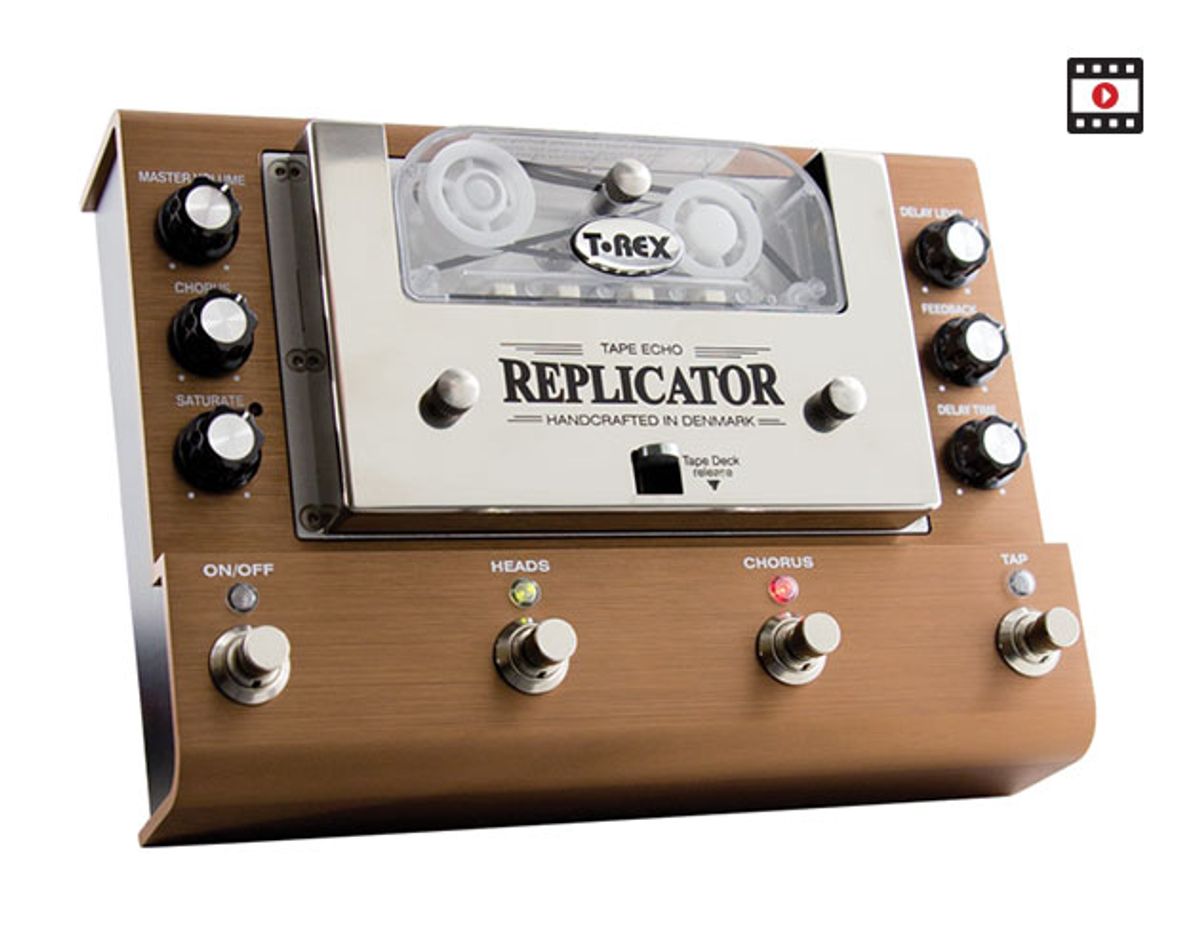 Compact and crazily expressive tape echo might be the most fun you’ll have with delay since you left your Echoplex by the dumpster.

These are strange times. For all the “progress” enabled by our tech obsessions, we also exist in an odd technological epoch in which digital engineers madly crunch code to replicate the imperfections of ostensibly obsolete technologies—leading us back to embrace the technologies we thought digital had “fixed.”

T-Rex’s Replicator isn’t just a stompbox embodiment of this snake-eating-its-tail allegory. It’s a thoughtfully executed tape delay with digital tap tempo control designed with best-of-both-worlds intent. But the Replicator’s sound, personality, and essence are prevailingly old school, and that is a wonderful thing—even if it confounds those repelled by the expressive potential of pre-digital chaos.

Tape and Tap Made Tidy
Anyone who owns an Echoplex or Space Echo can tell you they fail as studies in space-efficiency. So T-Rex should be applauded for a tape delay design that’s not much bigger than an old Deluxe Memory Man. The Replicator might occupy a lot of room on your pedalboard, but at least it could plausibly fit on one. The Replicator also seems robust enough the survive the travels and travails of pedalboard life. The enclosure is heavy-gauge aluminum and steel. The recording and playback mechanism in enclosed in a steel housing that can be removed for service via six small hex bolts. Knobs and switches all feel exceptionally sturdy. Perhaps the only point of vulnerability is the comparatively brittle plastic that makes up the removable tape cartridge. (Replicator comes with a spare, and replacements can be purchased form authorized dealers for $25.)

The control set reflects and spans the evolution of echo units, from original tape delays to modern digital machines. The left vertical row includes control knobs for master volume (output level), chorus (which is essentially a digitally controlled vari-speed function), and the saturate control, which adjusts the level of the signal that hits the tape. The right vertical row is a conventional set of delay level, feedback, and delay time controls.

The way repeats bloom and take shape in an almost bell-like curve rather than in the consistently downhill taper you get from most analog or digital delays is a revelation.

The leftmost foot switch turns the unit on and off. The second switch is more interesting: It switches between the two playback heads, one of which is exactly twice the distance from the record head as the second. Delay range for Head 1 is 250 to 1200 ms. Head 2 ranges from 125 to 600 ms. Used together, they yield cool compound, subdivided delays. The two rightmost switches activate the digitally controlled chorus and tap tempo functions. On the back of the unit there are two inputs for expression pedal control of tape speed and feedback.

Spinning Down The Vortex
The most important thing to know about the Replicator—especially if you’ve never used a tape delay—is that there is an ever-present element of chaos and unpredictability. To my ears, it’s a thing of absolute beauty. It rarely, if ever, fails to be musical, and it’s a delightful contrast to digital’s more black-and-white linearity. The chaos doesn’t just manifest itself sonically, however. The interactive nature of the controls also means Replicator functions like a living, breathing thing. Getting the feel for the way the controls work together isn’t always easy or intuitive, but they make the process of sound creation thrilling.

The saturation control is among the keys to the Replicator’s organic sound and feel. And the way it shapes responsiveness to picking dynamics is something you’ll rarely encounter in the digital or analog delay realm. Hitting the strings hard at heavy settings produces a more pronounced, dirtier, and tape compressed response that becomes a very expressive dynamic tool with a little practice. And the way it can make repeats bloom and take shape in an almost bell-like curve rather than in the consistently downhill taper you get from most analog or digital delays is a revelation.

The feedback knob is predictably sensitive. It can be scary at first. But you can tame the Replicator’s delightful propensity for self-oscillation by learning to manipulate knobs simultaneously—a trick enabled by the smart vertical orientation and close proximity of the level, feedback, and time controls. Once I got a feel for the sensitivity of the respective knobs, I could execute dramatic volume and echo swells, pitch drops, and slo-motion-to-hummingbird-pulse repeat rate maneuvers with a thumb on the delay time knob, my middle finger on the feedback, and my ring finger on the delay level. It’s addictive and terribly fun. It’s also a great reason to keep the Replicator at hip height or within arm’s reach rather than on the floor. (It fits nicely and securely, by the way, on top of most bigger amps.)

Though the Replicator comes with chorus that enhances tape modulation, there is plenty of lovely natural tape modulation in play without it. In fact, the chorus effect, which could not have been inexpensive to incorporate—and which seems to add little more than a single, pronounced pitch shift to the first repeat— almost seems redundant.

The tap tempo function, which uses digital control to regulate tape speed, is more useful but not without its quirks. Making radical adjustments on the fly can result in odd interruptions that, momentarily, make the signal entirely dry. The fix is to tap the tempo when the unit is in bypass mode and kick the delay back on when you need it, but it’s an odd limitation to manage in performance and diminishes the value of an otherwise cool function, to some extent.

The expression pedal functions can be tricky but fun. Varying the speed with a pedal tends to yield abstract whoops and bird chirps unless you keep the sweeps very subtle. Feedback sweeps are much more intuitive and effectively theatrical.

The Verdict
What does the Replicator have that digital approximations and analog delays don’t have? The answer is character and quirks in abundance. Whether those quirks will be worth the extra expense is a deeply personal matter. But for thrill-seekers who love the crackling rush of Neil Young’s Dead Man soundtrack, Joe Meek’s lo-fi production, or Radiohead’s Space Echo-driven expansiveness, the Replicator will be pure, unadulterated joy.