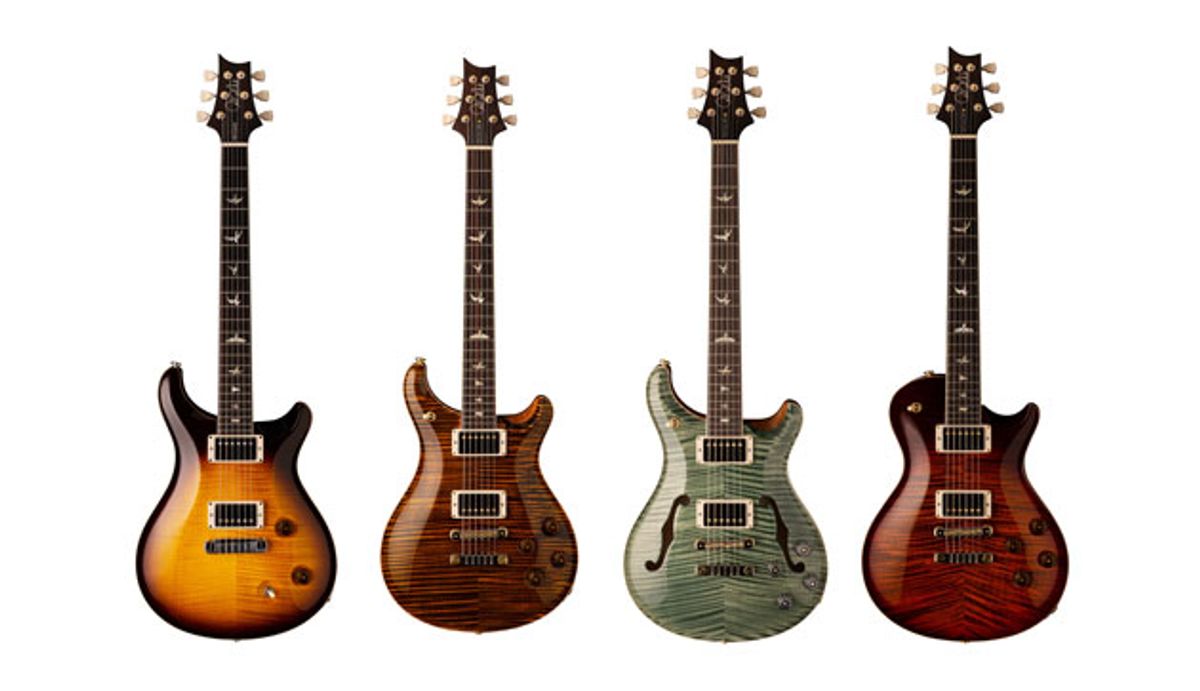 Check out three 35th Anniversary models and several updates to its Maryland-made guitar lines, including TCI-tuned pickups, a new nitro finish, as well as significant updates to the McCarty family.

Stevensville, MD (October 23, 2019) -- 2020 will mark PRS Guitars 35th Anniversary, and the celebration has already started with recent introductions to the SE Series and new artist model announcements. Today, PRS Guitars is pleased to continue that celebration with the addition of three 35th Anniversary models and several updates to its Maryland-made guitar lines, including TCI-tuned pickups, a new nitro finish, as well as significant updates to the McCarty family of instruments.

PRS Guitars is celebrating 35 years of guitar making and innovation with three new 35th Anniversary Custom 24 models in its Core, S2 Series, and SE Series line ups. Designed around the guitar that started it all, the Custom 24, these limited-edition models capture the foundational elements of the iconic PRS model and add the musical functionality of the Paul’s Guitar, creating a new, versatile platform. The 35th Anniversary Custom 24 models feature TCI (or TCI “S”) treble and bass pickups that are paired with two mini-toggle switches that allow players to put either or both pickups in humbucking or true single-coil mode. The clarity and unique tone of these vintage-inspired pickups is both big and nuanced, so players can easily find their sweet spot.

“35 years…it’s special what is going on at PRS right now, and we wanted to capture that by celebrating the guitar that helped put us on the map: the Custom 24. These models have new special pickups and switching system, and they sound and play great. The humbuckers are balanced, and the single coils are musical and full,” said Paul Reed Smith.

It’s All in the Details: TCI-Tuned Pickups and Nitro Finish

Paul Reed Smith is known as a man who studies history, scrutinizes the details, and never stops applying what he learns to his own instruments. It is that passion, care, and tenacity that has permeated PRS Guitars’ culture and led to the constant evolution of PRS products. Last year, PRS announced TCI (tuned capacitance and inductance) pickups on the Paul’s Guitar. But, TCI is more than a pickup, it’s a process. That process has now been applied to all PRS pickups offered on our Core line of instruments, with the exception of a few artist Signature models.

“TCI stands for Tuned Capacitance Inductance. When you wind a pickup, the coils are capacitors, resistors, and inductors simultaneously. Our more refined ability to be able to tune those factors is what we have incorporated into TCI pickups,” said Paul Reed Smith. “To our ears, the results are very musical. We are very proud of how far we’ve come in the understanding and making of pickups. It’s been a fun process.”

In preparation for shipping 2020 models, PRS is also updating the finish system in their Maryland factory. PRS has been known to tweak its finish formulations and processes, always looking to provide a great sounding, feeling, and looking guitar while maintaining a repeatable, quality-driven manufacturing process. This new nitro finish is a variation of PRS’s Private Stock high-gloss nitro with a cellulose CAB basecoat. The resulting finish is thin, hard, and clear – all qualities that help make a resonant, musical instrument that feels great.

“When you pick up a guitar with this finish, you can immediately feel that it’s not taking away from the guitar’s energy. It’s feels organic - like a classic, vintage guitar; it’s clear and does not hinder the figure or color of the instrument, and it sinks very little over time.” said Paul Reed Smith.

A Return to Roots: The McCarty Family

The McCarty model was first introduced in 1994, embodying the most up-to-date findings from PRS and looking back to the golden age of the guitar. As part of the company’s 35th Anniversary updates, the McCarty family of instruments is going back to its roots. Along with the TCI pickup and finish updates already mentioned, the McCarty will once again feature a one-piece stoptail bridge (the adjustable stoptail bridge will remain an option) and vintage-style tuners. It will also now feature a bone nut. The remaining McCarty instruments (including the McCarty 594, McCarty 594 Singlecut, and McCarty 594 Hollowbody II) will also be updated to vintage-style tuners (they already come standard with two-piece bridges and bone nuts).These updates further align the McCarty family and capture the vintage essence that the McCarty model has always promised.

“One of my sayings is that everything that touches the string is God – well, that’s really the bridge, the nut, and the tuners. So when we went after the McCarty model, that’s where we looked. These updates make a huge difference in the tone. The guitar sustains longer and the tone has more character,” said Paul Reed Smith. “The puzzle pieces all fit together, and there is no compromise to the integrity of the instrument. We’re very happy.”

Come celebrate in person! PRS Guitars will be hosting their biannual open house event, Experience PRS, on May 8-9, 2020. Save the date and stay tuned for more details. Follow @prsguitars on social media to join the conversation.