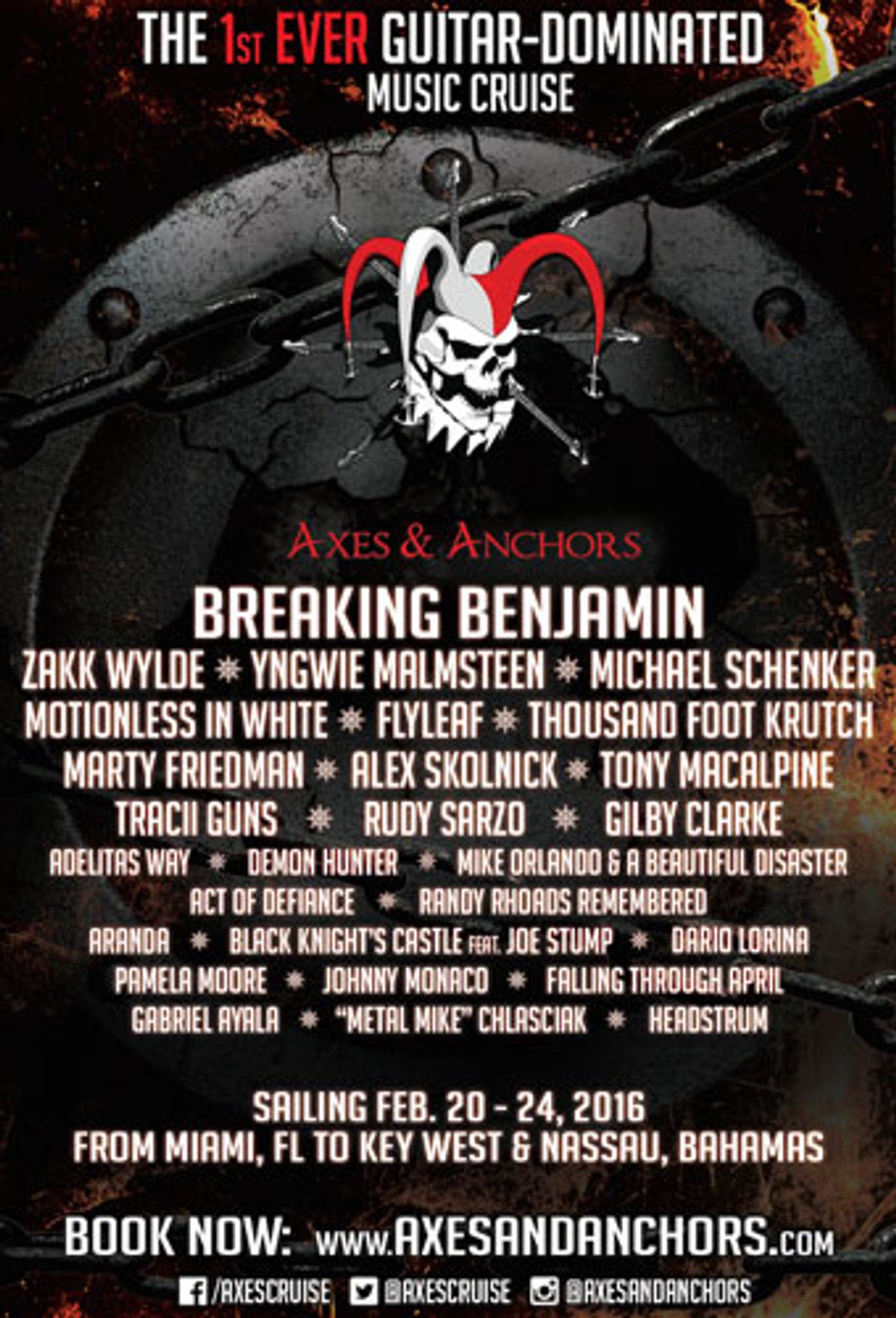 Act of Defiance recently released their debut Birth And The Burial to critical and consumer acclaim and the talent in the band is undeniable. The band will be performing two complete sets of material from their debut. Guitarist Chris Broderick and drummer Shawn Drover are masters of their instruments having played in various notable bands throughout their careers before forming Act Of Defiance together. The pair will each be giving clinics on their respective instruments with Chris teaching creative ways to overlay harmony and tonality in soloing and Shawn talking about double bass drum endurance and consistency, as well as using left-handed techniques on a right-handed drum set. Both will be taking audience questions.

“It is such an honor for Act Of Defiance to play the Axes and Anchors cruise. I count myself privileged to be among so many talented guitarists and bands. Not only will we get to perform for the audience on two separate occasions but both Shawn and I will be doing clinics as well. It will be a killer time breaking down the solo's on our new CD Birth and the Burial focusing on harmony, composition and technique. I know that people will take a wealth of knowledge not only from the clinics but from the interaction and whole experience that the Axes and Anchors cruise offers.This to me is the perfect environment for music workshops because one really gets to hang out with and get to know their fans and the fans of the other musicians in a relaxing and exciting setting. I can't wait and I look forward to seeing all of you there,” explains guitarist Chris Broderick.

“For several reasons, I am really excited that Act Of Defiance are performing on the Axes & Anchors cruise, one of which is this is my first cruise I have ever taken!” exclaims drummer Shawn Drover. “Aside from that, sharing the stage with so many of my friends I have met along the way as well as seeing some amazing guitar players live for the first time, is certainly something I am very much looking forward to! All in all, Axes & Anchors promises to be a unique and amazing experience on many levels and I am thrilled that Act of Defiance is a part of this!”

Further adding to the education factor of Axes & Anchors is the addition of Berklee graduate and Guitar World columnist “Metal Mike” Chlasciak. “Metal Mike” is known for his monthly column Metal For Life. He will be doing three on-board clinics including Randy Rhoads Modes Explained for Real; A Lesson in Power; and The Best of Metal for Life Column. Mike will also field questions from the audience during his workshops.

The cruise guarantees fans plenty of opportunities for meeting and hanging with their favorite bands on board, including free workshops on topics ranging from guitar and vocals, to concert photography, to stage clothing construction. Passengers are encouraged to bring their guitars on board for workshops and jam sessions.

All reservations include 4-nights lodging and taxes, all meals, all concerts, all open workshops, a professional photo opportunity with every artist, and more. Current promotions include a $150 per person rebate by paying in full.