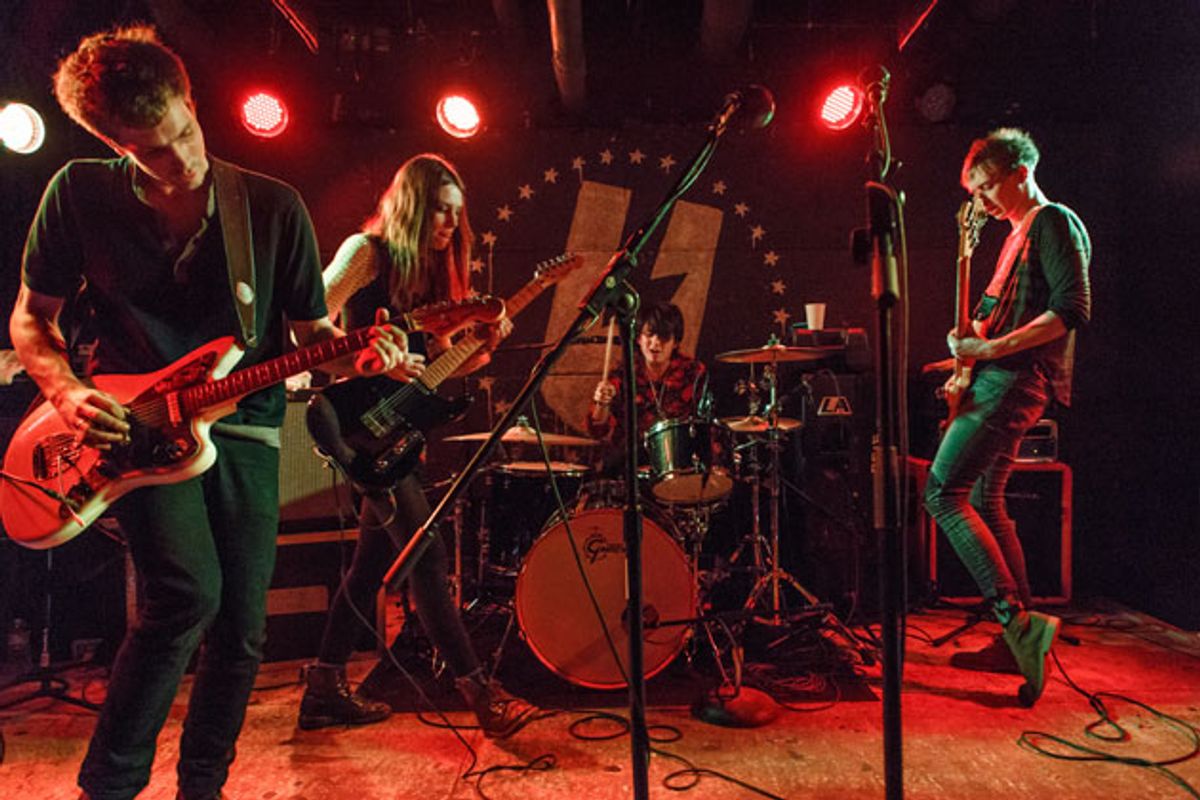 The Brit noisemaker talks sonic expressionism, the benefits of fingerstyle guitar, and respecting the sanctity of songs.

Wolf Alice is a brash, noisy North London-bred quartet that has the complete attention and adoration of the ultra-finicky British music press, and is trying to conquer the States. The band’s critically-lauded debut album, My Love Is Cool, is a dynamic ride that takes many of the tropes that made the alternative rock of the ’90s so potent—shifting walls of guitar, feedback squalls, tremolo warbles, and moody-yet-melodic vocals that conjure visions of Veruca Salt and Garbage—and reinvigorates them with the fire and passion of a pack of young musicians set on doing things their own way… even if their way, intentionally or not, echoes one of the most vibrant, creative decades of modern guitar-driven rock.

A series of triumphant appearances at major British music festivals this summer, including Reading, Leeds, and Glastonbury, teamed with rave reviews for My Love Is Cool from New Musical Express, The Daily Telegraph, the BBC (which placed the band on its “Best Music Sound of 2015” list), and, here in the U.S., industry pulse-taker Billboard, all seem to spell Arrival—capital “A” intended.

Although the band that takes its name from an unconventional coming-of-age story by English novelist Angela Carter surprisingly claims to have not been directly influenced by the ’90s grunge and noise-rock its sound so often references (even while mentioning The Pixies in interviews), Wolf Alice has done something truly excellent with its interpretation of that era’s music. The 13 songs on My Love Is Cool are often painted in challenging sonic textures, yet ultimately Wolf Alice lives and dies by its melodic sense and a mission to serve its songs, typically favoring simple arrangements (the sparsely adorned, massive-sounding “Moaning Lisa Smile” is a fine example) that provide bedrock for the whisper-to-scream delivery of frontwoman, guitarist, and blooming musical heroine, Ellie Rowsell.

Nonetheless, the musician chiefly responsible for Wolf Alice’s swirling guitar textures and unfettered, substantial riffs is lead guitarist and songwriter Joff Oddie. With a Fender Jaguar or Strat typically resting on his right knee as he hunches over its strings, Oddie appears—as he’s carried by the music’s shifting tides—to almost be dissecting his instrument, plucking and stabbing, probing to find the spots where magic lies buried and ready for revealing.

“Our soundman always tells me to turn down, but I think
secretly he quite likes it.”

Unlikely as it seems, given their ability to create a mighty caterwaul at whim, Oddie and Rowsell started performing at open mics as an acoustic duo in 2010. The foundation of the riff-driven rollercoaster ride “Fluffy,” from My Love Is Cool, reflects those origins. “The first version was made in my bedroom, with me and Ellie playing acoustic guitars,” Oddie relates. “From what I remember, it was a lot softer and had a bit more of a shoegaze element. I think it got more visceral in the rehearsal room and it simply stayed that way.” Wolf Alice’s current lineup, which includes bassist Theo Ellis and drummer Joel Amey, came together in 2012. A year later the band released its debut EP, Blush.

From across the pond, Oddie spoke with Premier Guitar about his unexpected influences, functioning as a “band-focused” guitarist, his affinity for fingerstyle guitar, and his desire to raise a din in the studio and onstage.

What was your path to the guitar?
I must have been about 10 or 11 when I first picked up a guitar. My step-dad played in a band and they used to rehearse in a barn next to our house, so there were always guitars kicking around. I remember deciding one day that I wanted to play the guitar—as you do when you’re a kid—and my step-dad restrung some old acoustic he wasn’t using and gave it to me, along with a three-chord songbook. There were about 50 songs in it you could learn by just knowing C, G, and D7 chords. I sat down and learned “Imagine” by John Lennon.

What players would you cite as major influences?
The English folk revivalists of the ’70s were some of the best guitarists I’ve ever heard. I’m a really big fan of Michael Chapman, Bert Jansch, Nick Drake, Davey Graham, as well as the guys across the pond from earlier, like “Mississippi” John Hurt, Robert Johnson, and Elizabeth Cotten.

I remember my brother coming home from university and playing the first Nick Drake album [1969’s Five Leaves Left] to me in his car. I can’t say I loved it straight away, buts it’s the one now that I keep coming back to. I also remember seeing Michael Chapman play in my village hall—it’s tiny and intimate, and in the middle of nowhere—and I’m not quite sure why he was there, but I was completely bowled over with his playing. He became an instant hero, then and there. The rest was all just research after I got the bug.

I recently got put onto John Fahey by our tour manager in the States and I’ve been obsessed with him. He has a record called The Transfiguration of Blind Joe Death and it blows my mind every time I hear it!

As far as electric players go, I’m a huge fan of Graham Coxon [Blur] and John Squire [the Stone Roses]. Amazing players! Other than that, I get really excited by people who just seem to have a total disregard for the traditions of guitar playing—people who make a lot of noise and use lots of pedals. I would say Lee Ranaldo [Sonic Youth] and Kevin Shields [My Bloody Valentine] are among my favorites where that style is concerned.

I’ve read that you started as a fingerstyle guitarist, although in Wolf Alice you play almost exclusively with a pick. How has your fingerstyle experience made its way into Wolf Alice’s sound?
When I’m not playing in Wolf Alice, I don’t tend to play a lot of electric guitar. I’ve always played acoustic at home. When you start fingerpicking, it really busts the instrument open and needs no other accompaniment. You get to a point where you are playing bass parts, rhythm parts, and leads all at the same time. In terms of learning about composition and how music is put together, it’s a great tool and it’s helped me a lot. I’m a self-taught fingerpicker, so I wouldn’t know if I use a specific style. It has made it easier to hybrid pick at times, and it’s a really useful creative tool to have. It did take me quite a while to get my head around using a pick when I started playing electric, though.

To set the record straight, what are the band’s influences?
The band really does listen to a pretty broad selection of music. Like I said earlier, I’m a big folk fan. Theo listens to a lot of grime music. [Editor’s Note: Grime is a hybrid style derived from UK garage, drums and bass, and dancehall music.] Joel has an encyclopedic knowledge of punk and hardcore, and Ellie listens to pretty much everything.

We all listen to Queens of the Stone Age, the Velvet Underground, Patrick Wolf, the Black Lips, and the Strokes—the kind of stuff that was around when we were growing up, really, as opposed to mainly ’90s stuff. On a songwriting level, the way the Velvet Underground married the ideologies of experimental and popular music had a pretty profound effect on me.

What gear did the band use in the studio for My Love Is Cool? Anything unusual?
I don’t know if there was anything particularly out of the ordinary used during the sessions. Some of the pedals we used really consistently were the Klon Centaur—which is such a classic now—a Colorsound Fuzz Box, an Empress Compressor, an Empress Tremolo2, and an Empress Phaser. We also pulled out an Electro-Harmonix HOG a bunch of times.

The real gem was this Nash 1958 Strat copy. If it’s not my Fender Jaguar you’re hearing on the record, then it’s probably that Nash. It was one of the best guitars I’ve ever played and if you see one in a shop, I urge you to have a go! They’re really some of the best guitars out there at the moment.

The guitar parts on the album all seem extremely focused on serving the songs, but there are really interesting atmospheric touches—particularly the feedback-with-atonal-bombs intro to “Giant Peach” and the ghostly background swells of “Swallowtail.” What are we hearing there?
We’re not really the kind of band to just throw guitar solos into songs for the hell of it. I believe good band-focused guitarists do what they have to—complement the song and what the vocalist is doing. There weren’t a lot of synths used during the recording, and a lot of the ambient parts were guitars through lots of pedals and amp combinations. We would send different split signals to various amps with designated effects chains going to specific amps to build a sound. Also, we would send a lot of drones through pedal chains to build a bed of sound.

The live and studio versions of “Giant Peach” build up to enormous waves of sound at several points. How did you get those sounds in the studio and how do you recreate them onstage?
There’s one main lead guitar track on “Giant Peach” that was a one-taker that runs through the whole song. That part is locked into the bass and drums because we wanted to retain as much “live” value to the track as we could. Under that, however, is a lot of layering of different tones to try and make it sound as fat as possible. I remember we tracked just the output of a distorted reverb in the biggest sounding parts of that song. That added a lot of depth and girth to those passages. As for live, it’s just about turning it up and moving around until you figure out the stage. Our soundman always tells me to turn down, but I think secretly he quite likes it.

The five-day Glastonbury Festival in the village of Pilton, Somerset, England, was among Wolf Alice’s major 2015 appearances, and their thrill-packed performance of “Giant Peach” on that stage is a scalding demonstration of many of the band’s guitar signatures. Ellie Rowsell kicks up the song’s stuttering spine of a riff, answered by Joff Oddie’s sputtering feedback entrance. At 1:00 Rowsell tosses off a brief melody before the group roars into a cascading wall of sound punctuated by a brief atonal squall from Oddie as the vocal begins. They have precise control of dynamics. After Wolf Alice brings the song to its psychedelic climax, they bust out a new heavy riff for the decrescendo that would sound like classic Black Sabbath if they played it an octave lower.